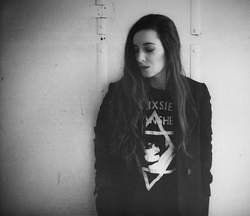 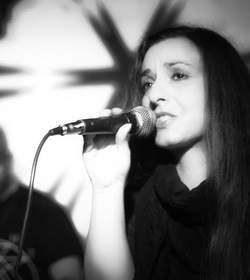 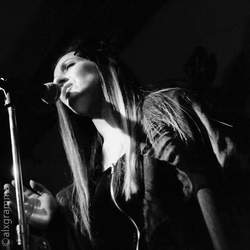 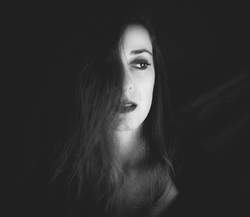 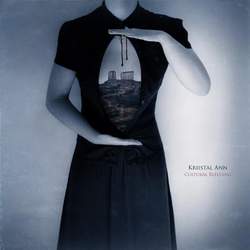 Of course the inspiration doesn’t fall from the sky as many believe. We need to provoke it. It’s something that is similar to flirting.

Kriistal Ann is a Greek artist and solo artist, but Anna is also involved in other projects such as Paradox Obscur. Peek-A-Boo listened to her personal story...

Anna, you play in three bands/projects: Kriistal Ann, Paradox Obscur and Sine Silex. Why do you need those?
It is a question that I ask myself. So, to answer this question, I reflected on my own personality. I came up with some truths: I'm bored by monotony, I like diversity, I abhor habit, I love the contacts with people who offer me new experiences at a level of consciousness. Moreover, from the time you decide to actively get involved with art, you find new paths and fellow travelers.

You started solo with Kriistal Ann. Afterwards, in 2014, Paradox Obscur was formed. What's the biggest difference in the way you perform in those different bands?
As I stated previously in my resume, I did not start to be actively involved with music when creating the project Kriistal Ann. Essentially this nickname I have since we started our first multidimensional project Resistance Of Independent Music with my partner Toxic Razor in 2007, it is based on various art forms, and it is inspired by literature and cinema. After several years on this project, I felt the need to deal with something very personal in which I could give a thoroughbred structure of my existence. So I created the solo project under the existing name Kriistal Ann.
The cause of many common things that tie us with Toxic Razor, made us create a new project that is driven by our indignation regarding the music industry which welcomes digestible products, thus destroying the critical and aesthetic thought of the audience for the benefit of financial gain. The difference in approach of these two projects is clear, I think. In my solo project, the interpretations are softer, with a fragile and a more forgiving approach to current topics, while in the Paradox Obscur project, one can discern a more sharp tongue, a more immediate and acute targeting of the theme.

What is unique for you in the work you do with Kriistal Ann?
This is probably more a question for my audience than for me. The biggest difficulty I encounter in this project is the grammatical structure. The rich Greek vocabulary is almost impossible to translate into English, it’s hard to expressgive the exact emotion or meaning I want to express. Another element that might make this project unique is the strongly emotional interpretation that sometimes works as a double-edged sword in terms of public sobriety. But anyway, every artistic approach can be unique because of its uniqueness which permeates human nature. The key is to deal with the uniqueness in a careful way, not allowing yourself to join the masses or to give in to vanity.

There are several issues you sing about. Some lyrics are quite heavy. Are they based on your personal inner life?
It would be a lie if I told you that I cut my personal life from the sphere I live in. Everything is a reality: I laugh, I feel happy or I cry. Everyday life, my experiences, the culture in which Ι live and the people with whom I socialize: all these elements form the cornerstone of my internal quality. About the heavy lyrical: I don't one should give something that is ready made. A creation must be an aesthetic delight, thought-provoking, with an awareness that focuses on plans that are not realized.

You already made three solo albums. Is there a kind of evolution, a change in your inner self?
After the completion of each album, I am able to understand what I could do better, from music to lyrics. One is able to discover bugs or small wonderful inspirations that lead to the birth of a little musical miracle. When I'm in a productive stage, I do not have that opportunity because I am living in my imagination, a deep utopian plan inside me.

How do you write songs? What comes first: the tune or the lyrics?
Of course the inspiration doesn’t fall from the sky as many believe. We need to provoke it. It’s something that is similar to flirting. It is a process of flipping the forefinger to grab the catch. It's like creating a fertile ground to flourish enchanting flowers. There must be a decoy, which is the world in which we live. So yes, collecting all this information can become a song. Sometimes, it is easy to do this and at other times I find it hard. It depends on the psychological state I am in. When I'm tense, things come more easily to me. Many times I challenge myself. I have something on my mind, which primarily conveys me to the musical field and then I start writing the lyrics.

You collaborated with Schonwald on the CD Cultural Bleeding. How did that happen? And with whom would you really like to work together in the (near) future.
Alessandra and Luca are loveable people. I had the luck to meet them last year at Waveteef in Belgium where we played together on the same day. A few months later, when I started writing songs for the album Cultural Bleeding, I created a song and I thought it would be wonderful to add guitars to the minimalist atmosphere. Initially, I asked Factice Factory to play a theme. Unfortunately, for personal reasons, they were unable to do that. I was sad. Generally, I don't ask others to do something for me. After several thoughts about who could help me, I thought about Schonwald. To my great pleasure, they immediately gave a positive response and in a short period we worked on the song with great result. I had several collaborations so far and we created many great songs together. Recently with Aidan Casserly on the wonderful album Muse. With Mode In Gliany, a great French artist on the Liquid State EP. With the Belgian Unidentified Man on the album Dissociative Identity and believe me, it is worth to check out the music!

We will! What's the ultimate goal you want to achieve with your music?
If you try to achieve goals in art, then you are losing the game. You should maintain your authenticity, it should be free of any kind of vanity. The bottom line is to do the best you can. Of course all people love recognition, the positive impact and interaction with the public. Especially the interaction is a necessary element for the evolution of an artist. Nowadays it is hard to get. The media network offers a lot of information, there are many interests and people decide what is valuable enough to be displayed or not on the social media. On the other hand, there is a great lack of aesthetic education, allowing people to suck up the taste of others. Everything seems like a marketing game.

There is a revival of synth wave and minimal. Any idea what the reason may be?
The revival of minimal music is connected with the technological progress in recent years. Some artists who still have analog aesthetics are real virtuosos when handling all those synthesizers and they provide a truly 80's atmosphere to the songs. Perhaps music and photography received the biggest blow from the technological revolution. Now everyone, without knowledge, can write music or make photographs. That is why the work of a real artist loses value. Not many people know that I am in a synth wave project called ToyoTomi that is influenced by 80's hard rock and the synth scene, most of the tracks are instrumental and driven by lead solos and lush atmospheres.

You live in Greece, how is the scene over there?
In Greece there is no scene. There are some artists, young and old, who are dedicated to this style of music, but there is no public to support them. A small majority in Athens, perhaps in Thessaloniki too. For Greek bands of the dark underground scene there aren’t many prospects in Greece. They must open their horizons or just write great music for themselves.

You are also involved in photography and poetry. Is that a way of expressing the feelings in different ways?
Everyone should follow his heart. Art has no definition and can't be mounted in a frame. The existence of art has a meaning, to satisfy our craving for creation. No matter which way you follow, you have to follwo your inner truth. Naturally all art forms interact with each other. From childhood I loved many forms. One talent alone is not enough. I always look for something that stimulates my mind and feelings. Something that will give me this wonderful kiss of life, so I can meet the needs of survival.

Do you have any plans to visit Belgium?
It would be a great pleasure to visit Belgium again. I was quite skeptical and insecure with what I would face there, but I must admit that I had not experienced such a warm audience before. I would love to go back there, but for the moment we have no proposal to play a concert. Perhaps the distance is a problem as we live in Rhodes. I really do not know. For now, we have a concert in Athens on 23rd April with Paradox Obscur together with Schonwald at Death Disco. It is organized by Die Seele Radio, the only web radio station in Greece which supports foreign and Greek bands that are involved in dark music.

ATTRITION • it was tough and dangerous to be a punk rocker in 1977. I was lucky, I could run fast.
LACRIMOSA • Without time there is no hope, and without hope there is no future.
BRING ON THE BLOODSHED • Humor is our common denominator. And everyone has a specific function in the band. We know who is good in what, and we must therefore have confidence.
SHE PAST AWAY • Writing and singing in our mother language gives us more freedom.
MILA MAR • We might record and release some new songs, we might travel the world together … Right now everything seems possible.
EVI VINE • The themes of the album run through our lives whether we're in the cities or the forest and sometimes you need to escape the sirens/asphalt to tie you back to the earth
HEKATE • I have the firm conviction that we can learn from myths and legends for our own lives and for our development.
ASH CODE • The second album is always more difficult. We thought about the possibility of being able to disappoint our audience, but we were driven by the desire to try to propose something different, while remaining ourselves.
ORGANIC • When we’re composing, it's all happening in a natural way.
SONJA KRAUSHOFER • I`m happy and proud that Thomas Rainer and I made it through all the years. I`m very thankful that I have the chance to be a singer... and do just what I really love to do.