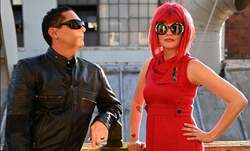 Interview with electronic duo, She 1 - Him 2

She 1 · Him 2 are Evan Nave (Lestat/PKS) and Cassie Bishop (Shy Moon), an alternative electronic duo from Cleveland, Ohio. They’ve recently released a cover of the David Bowie classic, “Fame”. We’re grateful for their time for this interview.

Thanks so much for the interview. Could you give us a brief background and meaning behind the name?

Evan – Sure thing. I was looking for a way to represent Cassie and I mathematically. The beginnings of an equation jumped in my head and what started as She 1 He 2 transformed into She 1 · Him 2. The added bonus to the name is that it can be said as “She won, him too.” As we work toward our first 4 song EP in 2023, the title will finish the equation with “Equals Them”.

Your latest release is a cover of David Bowie’s “Fame”. Why did you choose that particular track and which of his other recordings had the biggest impact on your lives?

Evan – All David Bowie has a huge impact in our lives. Fame in particular is super important to me because my mother and I used to dance to it in our living room every night together. David was the first “different” pop figure for me and really made me feel like there were others out there doing and being the things that I wanted to be.

You have a total of three singles on Bandcamp. Why did it take about a year in between singles?

Cassie – There really was no timeline for our music. We didn’t have any deadlines to meet, didn’t feel rushed, so we were able to take our time and enjoy the process. We also both work full time as well.

Evan – We should also point out the pandemic size elephant in the room. Covid made it interesting for us to work together. That’s why we’re never in videos together. Plus, we were really getting to know one another musically. I think the pace of writing will pick up at this point.

What triggers the start of a song? Particular emotions? Do the lyrics come first or music?

Cassie – For these songs, Evan was writing all the music and I was writing the lyrics, so it was a fun way for us to each bring something different to the table and create a cohesive piece of music from two different perspectives.

Evan – Right! And as far as the music goes, it’s really a matter of seeing where the music takes me. I never sit and think “OK dancey one now” or “Let’s do a slow song”. I think any time I’ve ever tried to force it like that, it’s been a total disaster. One of the songs for next year, we’re going to have Cassie write lyrics and a melody for me to write to, just to mix things up. I very much look forward to that because her strengths are very much one of the reasons I wanted to work with her in the first place.

What/who do you cite as your main musical and non-musical influences?

Cassie – I love so many different styles of music and genres but for this project style, I would say I was musically influenced by acts like Bat for Lashes, Portishead and Fever Ray. I also would like to thank emotional breakdowns, love, sadness, sickness and nature.

Evan – SO many but for this project I’m really leaning into my love of 80s New Wave and Techno. I was a major Devo geek in high school and it’s one of the reasons I bought my first keyboard. However, I feel I should point to some of the newer alternative acts that are heavily synth based as well, like Big Data, and Sir Sly. They really brought me out of a music funk and inspired me to do something like this.

Can you talk about any side projects or former projects and why the motivations for She 1 Him 2 are different?

Cassie – I am in a duo acoustic act called Shy Moon and have a solo project called Origami Moon. I love collaborating with other musicians, so when Evan asked, I was excited to work with his take on goth/industrial music, which has always been close to my heart as a genre.

Evan – Well the biggest act I performed with for a really long time was Lestat. That’s where I learned the skills of writing original songs and working with some really talented musicians. Then I was the front man for a really technical metal band called PKS for about 10 years. Between the two, I was able to show the world some of my darker sides, like melancholy and rage. But to me, this project is more about good, geeky fun. I very much look forward to performing this stuff live someday.

What do you envision for the forthcoming months for She 1 – Him 2?

Evan – Amen! More music, more videos and hopefully some live stuff in the coming years. Also, more collaborating with people I love in the scene. It’s been amazing working with Steven Siebold and having Steven Archer do the graphics for our upcoming video.

Thanks for your time. These final words are yours.

Evan – Thanks for the time and be on the lookout very shortly for our second single this year, Stuck Inside. I think of it as 80s techno dance music

LIA HIDE • Lia Hide & The Plato-Inspired New Album - An Interview
MOTOR!K • I have to admit that I often still find it strange and difficult to grasp: people going crazy on three weirdos playing some repetitive music
FERALIA PLANITIA & DAS AUGE • 'Thanks to our overlapping tastes in music, we became good friends; music was our cement, sort of speak…'
PUSSY RIOT • Unfortunately, everyone only understood what Putin is like when he started a war in Ukraine.
HAGAR THE WOMB • Now we know the audience will help us out when we forget the lyrics.
HETZE • We all work with homeless people on a daily basis and we try to be actively involved in their struggle.
NINO SABLE • I am not a friend of boxed content...
MARROWVOLTAGE • There is always a strong, dominating motif behind any of our songs. A feeling, a powerful association. For example, the gravitational force of an abyss underneath you. The movement of mighty and elegant creatures in the
LACRIMOSA • There were times when I could hardly believe that I would ever be able to finish the album.
ADULT. • 'We have worked and risked so much to make this tour happen, so pleeeeeease come get wild!!!'