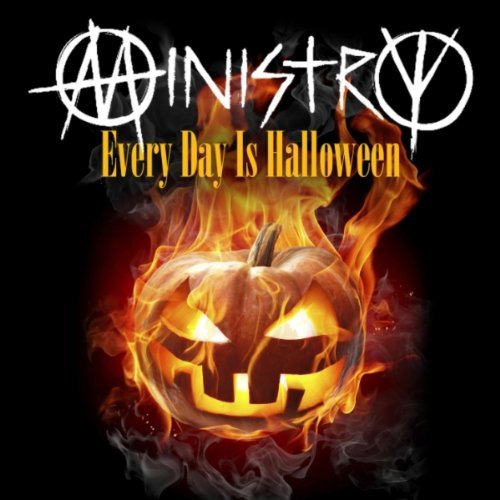 36 years ago Ministry released (Every Day Is) Halloween!

Today it’s Halloween so it’s the perfect day to remind you of Ministry’s release of the single '(Every Day Is) Halloween'. Originally released by Wax Trax! Records as an non-album b-side for the Ministry “comeback” single 'All Day' after they left Arista Records. The remixed version of 'All Day', titled 'All Day Remix', was featured on Ministry's 1986 album Twitch. '(Every Day is) Halloween' did not make it on this album but was included one year later (1987) on Ministry's compilation album Twelve Inch Singles (1981-1984).
In 2010 '(Every Day Is) Halloween' was re-released as an 6-track digital EP by Cleopatra Records. Besides the original version this EP features also four remixes and one cover version.

Ever since it’s first release (Every Day Is) Halloween has been adopted as one of the anthems of the (American) Industrial and Gothic community. 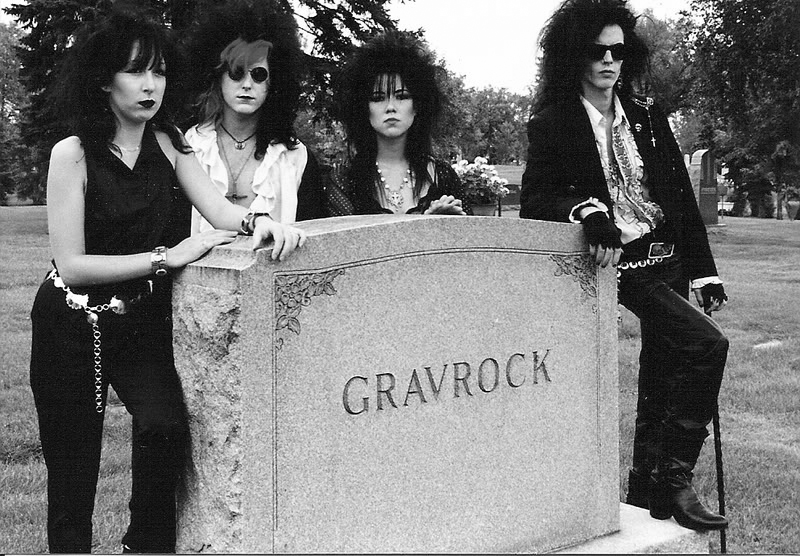 In time for Halloween Heaven and Hell Records resurrect the MORTICIA catalogue.

MORTICIA came to life in 1985. The band was conceived by founder keyboards/vocalist Jodie Tanaka and drummer/vocalist Matt Bachelor. The duo would set out to create dark, moody and romantic music combined with their sense of camp and tongue-in-cheek humour. The band would be the premier goth/deathrock band in the Twin Cities and be able to walk the realms of punk, alternative and heavy metal being, embraced by a variety of scenes. Sharing the stage with local heavy metal heroes such as Impaler and Slave Raider, opening for punk icons like Wendy O Williams or sharing bills with deathrock giants as Alien Sex Fiend and Sex Gang Children, MORTICIA proved they could hold their own in any arena.


The two would recruit bassist Chrystopher Winter to create a solid trio foundation that would last throughout most of the band's existence. Along with the addition of guitarist Therese Rita Langevin, the first line-up of MORTICIA would record and self-release a 5-song EP containing covers of The Doors 'Crystal Ship' and Lou Reed's 'Walk on the Wildside'. The humble release would prove to be a small sample of what was yet to come. In 1986 MORTICIA would record a 2-song 7" single with the song 'Zombie Love' and 'Scare Me to Death'.
In the wake of the departure of Langevin MORTICIA would recruit new guitarist Carmilla Casquette and the following year would release their full-length debut "Mortal Fear" with guest musicians Ross Willmert, , and Brian Bart from the melodic metal band DARE FORCE, providing additional guitar. Additional backing vocals provided by Betsy McComber. Recorded at Logic Studios in Minneapolis and produced by Bart, Tanaka, Batchelor and engineered by Bart. Released by Channel 83 Records on both vinyl and cassette, the 9-song album would come to life as a monster of deathrock that evoked the spirits of the genre's heavyweights such as 45 Grave, Skeletal Family and Christian Death.


In 1988 MORTICIA would release their follow-up LP "D.O.A" that's title track would be an unlikely cover of '70 psychedelic/progressive rock band Bloodrock. The cover-song choice would be a testament to the various influences in the band that would contribute to their unique brand of goth and deathrock.
The 8-song album released on Channel 83 Records on vinyl would see the band's sound evolving even further branching into several directions creating their style and approach to the deathrock subgenre. To accompany the progressively theatrical sound and direction MORTICIA would begin to focus more than ever before on the visual aspect of the band's performance by using props and parlour tricks to enhance the experience of their live shows.
A line-up change would occur once again seeing the departure of bassist Winter. With only the original founding duo of Tanaka and Bachelor remaining, bassist Timm Farrlor and guitarists Marko Nostrada and Dave Majerus, and later, Tim Kletti would join the band.


In 1991 MORTICIA would release their final album to date "13 Nightmares". Released on Channel 83 Records on both CD and cassette containing 13-tracks, one of which a cover of 'Bela Lugosi's Dead' by gothic rock legends BAUHAUS. The album would show the band bringing in more commercial heavy metal influence while holding on to the dark gothy ascetic that the band had created that would only add to the band's distinct identity of one of the most interesting bands of the scene.
In the sub-genres of deathrock, goth rock, horror rock or whatever one chooses to refer to it as there has never been a band like MORTICIA. As difficult as it is to imagine influences of deathrock, goth, glam, heavy metal, psychedelic, prog with some campy poppiness can all be found within. This is MORTICIA, there is only one.
Scheduled for release on Hallow's Eve (October 30th) Heaven and Hell Records will be releasing all three MORTICIA albums each remastered. These will be limited to 500 copies each. 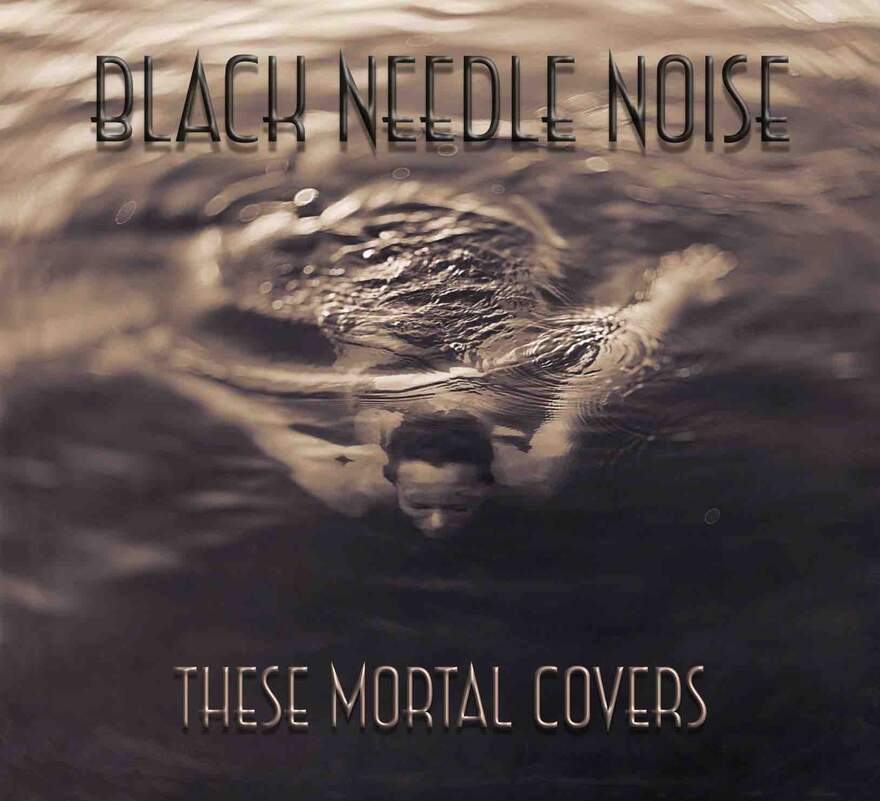 Legendary producer John Fryer presents his latest album 'These Mortal Covers' under his Black Needle Noise moniker. This is a covers-based album, involving collaborations with a handful of varied vocalists, including Anjela Piccard, Pinky Turzo, Beca, Tom Berger, Magic Rebecca Coseboom, and Betty X.
This album follows BNN's most recent single - 'What a Wonderful World' featuring Tom Berger on vocals, a beautiful and dramatically dark redux far from the original recorded by Louis Armstrong. The accompanying video was directed by Christoph Vitt and Alex Makarovand starring model Dori Darkmoon with Tom Berger.
The album's first single 'She Talks To Angels' features vocalist Anjela Piccard, whose powerful rendition of this Black Crowes track brings their own unique twist and stylistic trademark. Earlier, Black Needle Noise released 'Seed of Evil' with PIG, an unholy collaboration between Fryer and industrial music legend Raymond Watts (KMFDM).
As one of the most innovative sonic architects in our age, "John Fryer has practically soundtracked your entire life" (Impose Magazine). His musical imprint is massive, having shaped the sound of bands from Nine Inch Nails and Cocteau Twins to HIM and Depeche Mode. He is also one of just two masterminds behind This Mortal Coil (along with Ivo Watts-Russell – not only producing, but also keyboards, strings and synthesizer sequencing).
"The whole idea of doing cover versions started back with DarkDriveClinic. We were backstage for one of our live shows and the floor was gruby and Rebecca asked if she could put on my shoes to get something from the other side of the room and then I said, hey, let's do a cover of "Walking In My Shoes" and so then the covers album was born
back in 2011," says John Fryer.
"The 1st BNN track to be released was 'Bang Bang' and other covers I have been
asked to do for movies. Benny from Cleopatra heard 'What A Wonderful World' and a couple of others and said these are amazing and really wanted to put them out as an album.
The rest is history/herstory as they say."
John Fryer started his career in 1979 at London's Blackwing Studios (London) and soon began working with seminal bands on 4AD, Mute, Rough Trade and Beggars Banquet, including Depeche Mode, The Wolfgang Press and Cocteau Twins. His achievement in helping develop the latter's pioneering ethereal and ambient sound ultimately led Watts-Russell to recruit Fryer as his partner for This Mortal Coil.
A sense of expectation about his music has never left him – expectations he often exceeds from release to release, having produced many iconic artists, including Love and Rockets, Swans, HIM, Cradle of Filth, Clan of Xymox, Nitzer Ebb, Dead Can Dance, Yaz (Yazoo), Xmal Deutschland, Fields of the Nephilim, De/Vision, Stabbing Westward and many others. Fryer has also produced many film soundtracks, such as Seven, Clerks, Johnny Mnemonic, Mortal Kombat, Faust and Resident Evil: Apocalypse.
As of October 27, the full 'These Mortal Covers' album will be released digitally via Cleopatra Records via Bandcamp. Several weeks later, the good folks at Los Angeles' 33.3 Music Collective will also be offering CDs, obtainable exclusively as a gift when you purchase something via the Black Needle Noise website.
TRACK LIST
1. Bang Bang feat. Dr Strangefryer
2. Wonderful World feat. Tom Berger
3. Magic feat. Beca
4. Black Magic feat. Anjela Piccard
5. Walking In My Shoes feat. Rebecca Coseboom
6. Love Don't Live Here Anymore feat. Anjela Piccard
7. Changes feat. Pinky Turzo
8. She Talks To Angels feat. Anjela Piccard
9. Let This Be The Night feat. Pinky Turzo
10. Losing My Religion feat Rebecca Coseboom
11. I Know What Boys Like feat. Betty X

On this day, 43 ago, The Sex Pistols released their one and only official studio album ‘Never Mind the Bollocks, Here's the Sex Pistols’. It was released by Virgin Records on 28 October 1977. The album has influenced many bands and musicians, and the industry in general. In particular, the album's raw energy, and Johnny Rotten's sneering delivery and "half-singing", are often considered game-changing. It is frequently listed as the most influential punk album, and one of the most important albums of all time.

By the time of its release, the Sex Pistols were controversial, having sworn on live TV, been fired from two record labels, and been banned from playing live in some parts of Britain. The album title added to that controversy, with some people finding the word "bollocks" offensive. Many record stores refused to carry it and some record charts refused to list its title, showing just a blank space instead.

Due in part to its notoriety, and in spite of many sales bans at major retailers, the album debuted at number one on the UK Album Charts. It achieved advance orders of 125,000 copies after a weeks of its release and went gold only a few weeks later, on 17 November. It remained a best-seller for over a year, spending 60 weeks in the top 25. The album has also been certified platinum by the RIAA. It has seen several reissues, the latest in 2017.

Note: "Submission" was included with most, but not all, copies of the 11-track as a one-sided seven-inch single.

Today it is exactly 32 years since the Belgian Goth-fathers of the EBM (Electronic Body Music) released their fourth studio album Front By Front (PIAS / 28.10.1988). An album that came only one year after Official Version (1987) and with which these gentlemen managed to refine the EBM recipe almost to perfection. Front 242 was clearly on the roll and Front By Front contained, just as its predecessor, a lot of dance floor fillers and also classic tracks, like Until Death (Us Do Part), Circling Overland, Im Rhythmus Bleiben, Welcome to Paradise. And of course maybe one of their most famous and successful singles / songs until this day, Headhunter. Front By Front is therefore considered one of the best Electro / Industrial albums ever made, not only by fans but also by critics around the world. Headhunter's remarkable video, filmed and directed by the well-known Dutch director / home photographer of Depeche Mode, U2 and Joy Division, Anton Corbijn, received heavy rotation on MTV and other music channels of that time. Due to the remarkable presence of eggs in this video clip, the song soon acquired the nickname 'Egg Hunter'. Despite these seemingly successful releases, Front 242’s home label and distribution partner Red Rhino Europe went bankrupt the same year and was taken over by PIAS (Play It again Sam). After the release of Front By Front, it would be a 3 year long wait for the fans until the follow-up album Tyranny> For was released. In 1992, the Front By Front album was remastered and was put in a new jacket for the re-release on the American major label Sony / Epic.