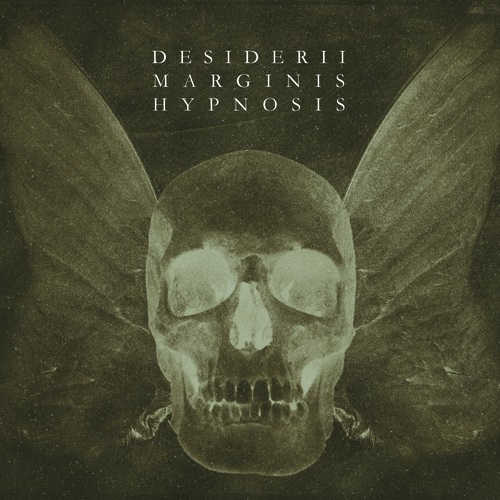 Being interested in gothic and wave with its many subgenres, I also try to listen to styles that aren’t really my cup of tea. For example: dark ambient, which I gave up for awhile. I was bored of getting stuck in an impenetrable layer of sounds, demotivated by the lack of melody and rhythm. But this new offer from Desiderii Marginis is more ‘accessible’.

Hypnosis is their 8th album, who were previously on the notorious Cold Meat Industry label. With the new album (a double CD) Desiderii Marginis tries to reproduce the emotions of dreams and nightmares that were submitted by fans and friends as well as those of Johan Levin himself.

Black feathers opens the album with ominous, haunting synths and samples from screeching crows. There are a lot of slowly unfolding haunting soundscapes on Hypnosis but tracks like The ghost box, Lazarus palace and especially The wake have a melancholic undercurrent. Some tracks have a bit of an organic touch, such as Paralysis with its sparse guitar notes. And also the obligate field recordings occur like in Rain on your dreams with its gentle downpour.

The fog closing in is an excellent soundtrack for a November morning. Other noteworthy tracks are Endless staircase with samples from footsteps and the menacing Unmasked with its insane laughter. My favourite tracks are Temple of Andromeda with its remarkable sound and The dividing wall with its electric guitars.

Although Hypnosis is a lengthy album, it didn’t bore me. I will not play it often, but when I’m in the right mood I can really enjoy it. Desiderii Marginis brings my interest for dark ambient back to life.