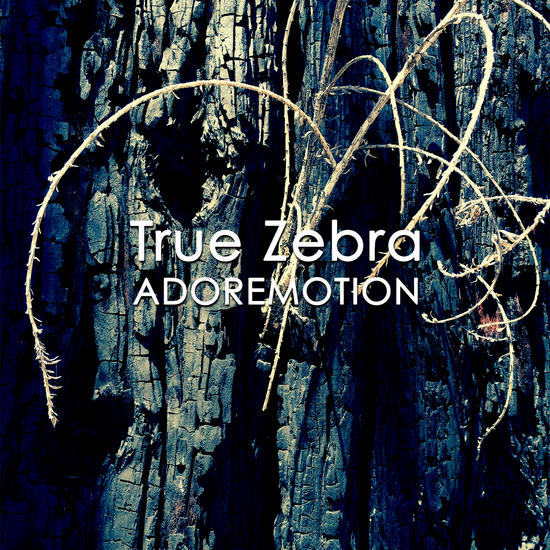 True Zebra was one of my last year’s discoveries. I saw Kevin already a few times on stage, and although I see lots of bands, he still manages to surprise me. His style is a mixture of electro rock and dance, with even some industrial influences.

With his second full album ‘Adoremotion’ he composes eight songs (nine on the limited Bandcamp-edition), all in different styles and genres, but especially creating his own special True Zebra-sound.

Opening with the track ‘Push’, slowly build up synth sounds, nice pounding beats, repetitive loops together with Kevin’s voice. Just a perfect opener. Maybe the most danceable and commercial track of the album, but already a nice example of what can be expected next on this album. More electronics, even some minimal influences on ‘Shame’, darker but still lots of rhythms to make you move.

On ‘Forget’, and ‘Hunt’ Kevin is in a more ‘guitar’ mood, and that brings Nine Inch Nails to mind. Sometimes even his voice reminds me of Trent Reznor, I think they are big influences on True Zebra.

My personal favourite on this album is ‘Transition’, a perfect rhythmic track, dark synths, tight grooves, sparkles of guitar, all perfectly harmonizing with Kevin's voice.

It’s a shame that this guy doesn’t have a big record deal yet, his music is so intense and intelligent. Kevin Strauwens’ alternative view on this electro rock album is unique, and the amazing soundscapes are really worth listening to.