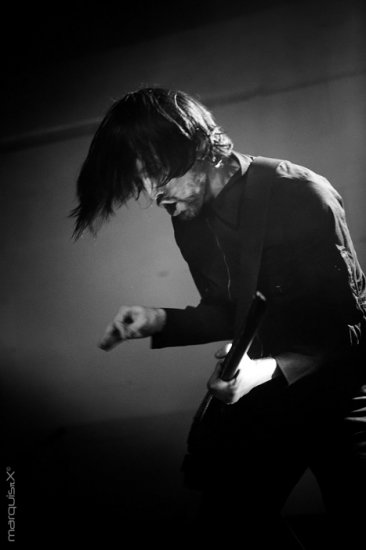 It was exactly 10 years ago when the first Belgian Independent Music Festival took place at the Hof ter loo venue, with Suicide Commando, Neon Judgement, Vomito Negro, Dive, A Split Second, etc. This year, it is therefore the 11th edition of this really unique festival, aimed at promoting local independent bands from the 'dark scene'. Organized by BodyBeats Production and supported by the media partners Peek-a-Boo Magazine & Dark Entries Magazine, the event attracted several hundreds of fans from Belgium, Germany, Holland, France and even further! A real success!

True Zebra, aka Kevin Strauwen, had the honor of opening the program. Strauwen is a multi-instrumentist, songwriter, engineer and producer from Flanders, who received amazing reviews with his official self-released digital debut album as True Zebra. Alone on the stage, Strauwen switched from keyboards to bass and guitar, all this while doing all the vocals: a real performance. He played mostly songs from his album, plus three new songs, "The Shame", "Happen" and "Push It". Conceived as rock but mistaken with electronic tries and techniques, True Zebra transmutes an alternative view into the electro rock scene with tight-grooves, industrial-esque rhythms and spookish melodies. Watch True Zebra performing "Revelation".

True Zebra's music evokes Nince Inch Nails, especially on "The Silence", but also Iamx. Good references, you will admit! To finish his act, Strauwen played a remix version of his hit "Delirious". A truly promising show! We are looking forward to the next record! The setlist was: 1.sounds easy, 2.everybody needs, 3.revelation, 4.get out, 5.the shame (new), 6.happen (new), 7.the silence, 8.under control, 9.push it (new), 10.delirious

We had a short interview with Kevin Strauwen after the show. Here it is! Enjoy...