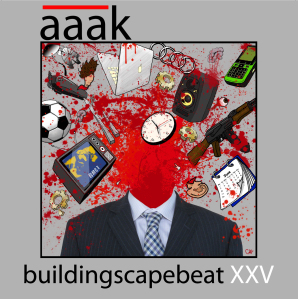 This new AAAK release ‘Buildingscapebeat XXV’ has become a double CD containing new and reworked songs. The first CD features six new songs, while the second CD holds a complete re-recorded and reworked version of their original debut LP 'Buildingscapebeat' from 1988. After disappearing in the 90's, AAAK resurfaced after nearly 25 years with the comeback album ‘Totalitarian Tip Toe’, which was received as a great album by the international music press and fans, so much so that the band was invited to support Red Hot Chili Peppers on their 2012 Euro/Scandinavian tour. As on 'Totalitarian Tip Toe' the new tracks on this double album are again, one by one, all in your face electro-rock songs with a 'Manchester twist'. And this is exactly what distinguishes the overall AAAK sound from all other current bands, their unique sound! Tracks like the title song 'Buildingscapebeat XXV', 'Though Luck' and 'Memorial Song' are fired from the speakers like a rapid pounding terrorist mortar attack and will soon be tossing you all over the dancefloor. Also, the remakes on the second CD seem to hit the bullseye! Already legendary songs like 'Sharpshooter', 'Cruise Control' and 'Brain Drain' are given a second and even more energetic life with this release! Don't expect AAAK to play cheesy sweet songs but prepare for some sloganesque punk-attitude riot chants. No compromises and still As Able As Kane!