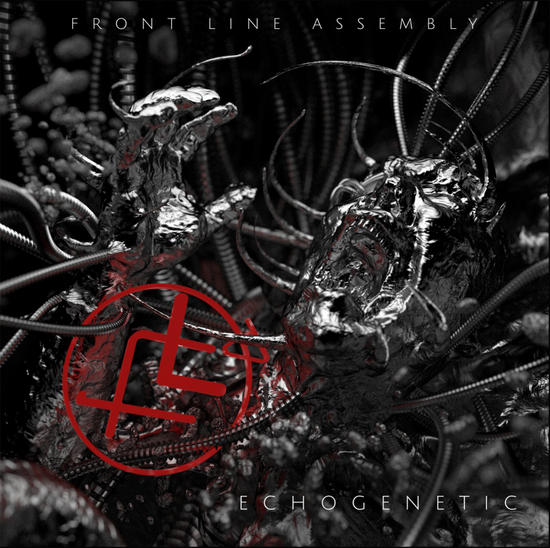 Front Line Assembly fans around the world can start breathing again. Although it was made clear their last album AirMech (2012) was composed for the AirMech video game it might have been a wiser choice to release it under another moniker. Anyway, with 'Echogenitic' FLA seems to be back on track! After a few seconds, and while futuristic and industrial noises are fired off in deadly and dangerous salvos towards the listeners direction, there is no doubt that this album is going to be lust for the ears. People who have some background know FLA has never been afraid of flirting with the current hypes and music styles, and so does mastermind Bill Leeb again on this album. On some tracks you will recognize clearly the … Dubstep or better the Brostep imprint! Think Skrillex or Flux Pavilion ... But don't worry! They succeed to never cross or even reach the 'annoying-point' level. There's even more!

Next to the ear-candy songs this album also has great danceable tracks that fit seamlessly in the great FLA dance-floor-filler tradition. I'm pretty sure that, before you know it, you will be dancing and jumping to killer tracks like 'Killing Ground', 'Deadened', 'Exhale' and 'Heartquake' on your local underground party. DJs and other vinyl fetishists will be glad to hear there also is a limited edition gate folded 2x12" available! My copy is ordered!