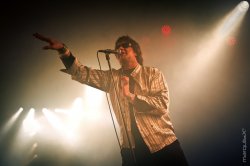 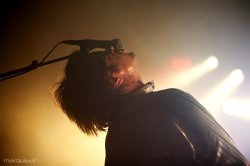 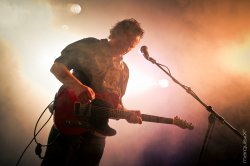 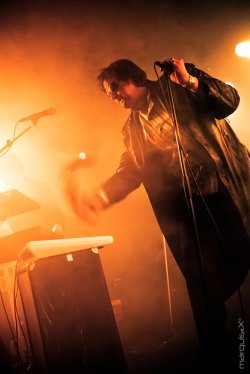 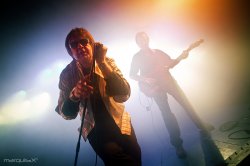 As long as the public wants to see us, I consider it an honor to do live shows for them.

A Split-Second, for some people,are a small band from Belgium who where at the cradle of the New Beat-movement and historically speaking it’s true, but more than that, they are one of the most important electronic bands Belgium has ever had. Soon at the Shadowplayfestival, but first interviewed by us.

Marc, would you have believed people who told you A Split-Second was going to be ground breaking, when you first started the project?

I never really had time to think about that. I was still in college and A Split-Second was my first band. We started as a new wave band and played a mix of my own songs and covers from DEVO, The Cure … When I wanted to get more electronics involved, everything went very fast. I processed old influences into an electronic context, very instinctively. I didn’t have an idea in which genre we would fit, but our first demo resulted in a record deal and an immediate breakthrough.

According to the history books everything surrounding A Spilt Second happened almost accidentally. Rumours say that some people in the initial band preferred to go for a rock sound and there were conflicts on this issue.

Strange story. I don’t see how you would make music “accidentally”, that you don’t even like? Rock is only one of the many influences I just referred to, just like gothic, new wave and so on. The danger of falling into the trap of clichés is very big when you limit yourself to one style. If you really want to be creative, it’s better to mix different styles and surpass clichés. Electronic instruments offer the broadest sound spectrum to do this, so it was evident which choice to make, but from the very beginning we also used guitars, because I liked rock and guitar bands like The Cure, Bauhaus... I also thought the mix with electronics to be interesting.

You’re specific sound came to life in TOP Studios, Ghent. Thinking about TOP Studios, amongst many others, Allan Fawn comes to mind. Is it fair to say that there was a lot of talent around but artists were misunderstood?

Not really, I think. Allen Fawn did very well for himself. He was able to build around 5 houses already, thanks to his involvement with K3 and also The Dinky Toys and Skyblasters were rather successful. OK, we were ignored by the national press, but not by the public. The whole electronic scene was ignored by the Belgian Press. Ask people from The Klinik for instance. They will surely confirm this, but I’m not really complaining. We made it big abroad!

There was the story of the song becoming a hit because it was played to slow … Myth becoming truth?

It was all very surprising. “Flesh” was a big hit in discotheques, practically immediately after its release. I have no idea who started playing it at 33 RPM, but very soon DJ’s across the borders did the same.

“Flesh” is also known as the beginning of new beat. I suppose such things generate friends and foes?

It wasn’t a big problem for me. In ,for instance, Spain and the US “Rigor Mortis” became a big hit. We weren’t a one hit wonder there and we were frequently asked to play live sets. In Belgium it was a bigger problem. We were only offered playbacks in discos. We also had to cut ourselves loose from the new beat genre. It soon turned out that most of the “bands” were actually the same 4 or 5 people that sent out some costumed clowns to playback their songs. Being musicians, that wasn’t really our scene and because of it we didn’t perform live in Belgium for over ten years

As in any genre some very good songs were made, and also a lot of bad ones. The principal reason for me not being a huge fan, are the meaningless lyrics. Before the new beat era I frequented places like the Avant-Garde and the Fash. They played Virgin Prunes and Fad Gadget there: dance music WITH brains!

Didnt “Flesh” and the whole new beat thing turn out to be polluted gifts? Wasn’t A Split-Second much, much more than that?

Like I said before, only in Belgium. In foreign countries there was no problem, but thanks to all this we are really looking forward to play live for our Belgian fans, who were left in the cold by concert organizers for much to long.

You were on Antler, a sublime label, don’t you agree?

I guess the most important thing was that we got carte blanche from Antler. No one interfered with our music or sleeve design. I doubt if there were a lot of record companies granting that much freedom to beginning bands at the time. They signed us immediately after hearing our very first demo. It’s kind of funny, they wanted to put “Flesh” on our first mini-album, just to fill it up actually. They thought the song to be completely outdated. Something that would have been ok four years earlier!

What about attention abroad?

“On Command” was picked up by an EBM-audience after appearing on a German compilation. “Rigor Mortis” and “Colonial Discharge” became big hits in Spain and Scandinavia. Wax Trax released an album in America with songs from our debut album and “Ballistic Statues”. The attention we got due to these releases and hits, permitted us to go on tour in all these countries. It also permitted us to be full-time musicians, the most important bonus for us.

You are children of the eighties, the decade of decades?

In my opinion it’s surely the decade with the most interesting alternative scene. Next to the ones I mentioned earlier, there were countless other interesting bands: Yello, Siouxsie and the Banshees, Shriekback, Japan and so on. It was also the decade of the most unique Belgian band ever: TC Matic.

What’s your view on the current eighties revival?

Nostalgia is cute of course, but I think it’s more important that a young audience detects the better bands of that era and the best music of that time lives on and inspires young people.

You’re back on stage now. Why this urge?

It gives us a kick to thrill an audience with our live songs. Our live impact is totally different. We often play for people that have never seen us before and their reactions are really fantastic. It still amazes me that for instance, I meet Italians that especially came to Germany for our concerts. As long as the public wants to see us, I consider it an honor to do live shows for them.

You’ve probably been asked this a million times … but don’t you regret being Belgian? Did you never think: what if … in another world, in another country …

No, not really. Belgium is in many ways an interesting country for composers and songwriters. It’s small and as a consequence there is a big openness towards other cultures and influences. Americans and French for instance, are often more stuck in their own culture and language. A lot of Belgian electronic bands had an international impact in the eighties and “Made in Belgium” was considered a brand, assuring high quality.

Are you thinking about recording new material in the near future?

Yes we are. The most important thing is that we want the new material to be at least as good as the older songs. We are not going to release new stuff, just to stay busy.

Also stylistically, it will have to stay near to our older material. With “Megabite” we went for a change of style (like Ministry for instance) that appealed to a very young public, but left our older fans in awe.

What’s your best album ever?

Impossible to say! I can fill half a page with all my favorite bands and composers. It won’t be an album by a reggae band or jazz ensemble, that much I can say.

With whom would you like to be stuck in an elevator for 8 hours and what would you do?

With a beautiful, intelligent woman. What would happen also depends on her of course!

ULTERIOR • We wont stop until we are the biggest band on the planet or we are dead
LES FLEURS DU MAL • We have got more than we expected, and to our astonishment we have got better reviews than we ever hoped for.
CHRIS & COSEY • Music can be regarded as art. | Art can be regarded as music.
SUICIDE COMMANDO • It’s such a small world that success is quite relative and I’ve always been very aware of that.
HANIN ELIAS • I think life is like school for the soul and I needed to discover something else for myself.
THE EXPLODING BOY • The Cure or not The Cure, that’s the question!
LIZARD SMILE • After our daily 9 to 5 routine, getting together to write and play music is something we look forward to.
DISKONNEKTED • As an artist you have to be ambitious, you have to like what you do and you need to have inspiration.
NTRSN • It’s quite funny we can be ourselves and bring our music!
MILITIA • We’re not aiming to start some sort of revolution, we want to make people think about what’s going on and to see things in a different perspective.

Other reviews from A SPLIT-SECOND
A SPLIT-SECOND • Marc Ickx talks about A Split-Second
A SPLIT-SECOND • We never had a decent promotional machine behind us, and a lot of the press was hostile. But the crowds always turned up, and we try to give them an unforgettable evening in return.