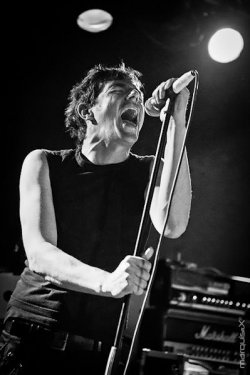 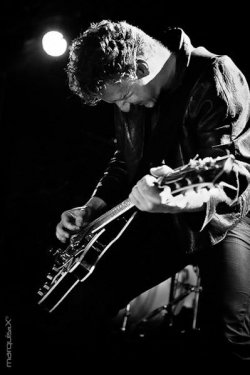 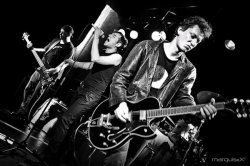 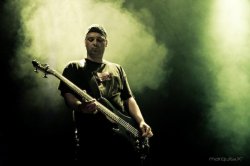 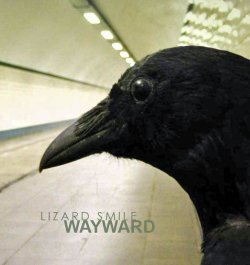 After our daily 9 to 5 routine, getting together to write and play music is something we look forward to.

There is a lot of Belgian talent at Shadowplay as well. Lizard Smile are somewhat of a gothrock instution over here and before they enter the stage of Kortrijk, Peek-A-Boo had a chat with those crazy three.

Lizard Smile have now been around for 15 years. How do you see those years?

Strobo: It’s something I don’t think about, really. We’ve been doing this since the end of the 90’s (our first record was released in 2000) and it feels just natural that the band is still around.

In 2005 we took a year off, but apart from that, we’ve always kept rehearsing and working on new songs.

That’s what keeps us going, experimenting with new songs and trying them out on an unsuspecting audience. And of course, going on stage with a grin!

BN: Personally I think we evolved in those 15 years. Our sound got more defined and recognizable. We also developed a natural way of working together.

I interviewed you ages ago when I was busy with my fanzine. Back then, Lizard Smile were a real DIY-band.

Strobo: That approach hasn’t changed. Some parts of our last record or the new mini-album we’re working on were recorded in a professional studio. That means that some of the recordings and particularly the mixing are in the hands of an outsider.

The first album was recorded all by ourselves, which, to be honest, you can hear.

The rest of the process is still in our hands. Along with the audio engineer we decide what sound our songs will have and Beatnick is still the driving force behind the visual aspects of Lizard Smile.

BN: The last ‘finishing touch’ that is needed to lift your songs to the level of a commercial release is really necessary. You just can’t ignore that.

It’s also important that someone outside the band is taking care of this because they can listen to your music with a fresh ear. Some things you simply don’t hear in your own songs.

Strobo: Thanks. We’re aware of the tradition we’re coming from but during the writing process we first try to go for a distinct identity for each song.

In trying to achieve this, everything is possible when it comes down to sounds or structure.

If it sounds fine and it works, then it stays. If there’s a reference to another goth band, so be it, but it’s not a must at all.

How important is pigeonholing for you?

BN: Lizard Smile has its roots but it’s really not something we worry about.

Albi: I’m glad you mention it …I still have to fill in my tax letter!

I believe that not thinking in boxes and using other genres may very well be a fundamental ingredient of Lizard Smile.

All I want to say is nobody is waiting for a new Christian Death, VNV, Suicide Commando or Sisters.

Let’s be honest those who make music in Belgium have to do it for the fun of it as you can’t make any money with it.

Strobo: Totally true. We’ve been lucky to do some great gigs thus far. We did the support act for both The Mission and Red Lorry Yellow Lorry, played in the Paradiso in Amsterdam, played in London several times... It's really the places you go, the people you meet, the organizers and the audience that make it great to play music.

If you can touch someone with your music and you can share that feeling then it’s just fantastic.

BN: I think it’s clear by now that we do this for fun. Earning money almost sounds like utopian thinking. We’re able to fund our equipment and studio time with the sales of our cd’s and gigs, and that’s what counts.

If you have a look at the Belgian underground, do you see a positive or a negative evolution?

Strobo: At a certain point in time I noticed that the goth scene was beginning to evolve in itself, as opposed to being a style that evolved out of other styles. Not a bad case at all, as I’m always interested in how things work out. I do notice though that I’m less surprised than I used to be.

On the other hand: the themes, feelings or sounds I always loved in the goth underground can now be found in bands that don’t fit that label at all.

A fairly new band I can recommend for instance is Warpaint. The Raveonettes and Yeah Yeah Yeahs are also bands that always grab me by the neck, the same experience I have when listening to Bauhaus, Sisters Of Mercy or Alien Sex Fiend.

Albi: Strobo has a point here. The surprise-effect from bands like Virgin Prunes, Nitzer Ebb or Das Ich (even if it was for 5 minutes) has gone. I guess we’re getting old. There are surely some good bands around who are operating outside the goth label. Our Belgian scene always has been more oriented to electronics. At the moment, there are quite some interesting things to discover.

And when you were standing on a stage next to those great names, did you never think: damn, that should have been me!

BN: Not quite. Any gig can have that effect on me, but it’s just as likely to happen when I see good performance by a local band.

Strobo: Not really, no. I must say that I’ve already been pleasantly surprised by the way big names act backstage. On the other hand, you can’t help but notice that in the end those guys are doing their job, and often a tough job at that.

Albi: Aren’t we are allowed to dream? Honestly, no!

It’s like Strobo says: for some it’s a job.

After our 9 to 5 job, getting together to write and play music is something we look forward to.

I know that once there was an interest in Lizard Smile from other countries. How’s that today?

Strobo: Well, we were booked for a concert that would take place in Sheffield. Later it moved to Whitby, but now it’s completely cancelled.

There is certainly interest from other countries, we see that through the reactions on our My Space site. We got a worldwide distribution through Resurrection Records in London. Well. As the saying goes: have instruments, will travel.

Soon you will be playing at the Shadowplayfestival. I assume you’ll see that as one of the highlights of your career?

Strobo: I am always looking forward to a new highlight, and the funny thing is that you never know when that will be.

At the moment we’re really hungry to perform some new songs. They were recorded at the end of 2010. At the moment they’re getting mixed, and we’re quite curious for the reactions to come.

BN: True. A gig from which you expect nothing can turn out into something brilliant and vice versa. You just can’t predict and it really doesn’t help worrying about it.

Albi : I am really looking forward to it and kick some assJ.

What’s your favourite record of all time and please state why...

Albi: That is a very difficult question as it changes a lot. For the last 2 weeks I’ve been listening to the latest The Raveonettes album constantly.

If I really have to make a choice I’d go for “Earth Inferno” by Fields Of The Nephilim. The first time I heard it, it blew me away.

BN: That’s true. You play some record for some time and then you go to another. I’d go for “First and last and always” as this album helped me through a difficult period of my life.

With whom wouldn’t you mind being alone with in an elevator for 8 hours and what would you do then?

Albi: With the redheaded vampirella Jessica from True Blood and Shirley Manson from Garbage. What would we do? Use your imagination for once please!!

BN: A year ago I would have gone for Brittany Murphy but sadly enough I’d rather not spend 8 hours with her in an elevator in her present condition.

DISKONNEKTED • As an artist you have to be ambitious, you have to like what you do and you need to have inspiration.
NTRSN • It’s quite funny we can be ourselves and bring our music!
MILITIA • We’re not aiming to start some sort of revolution, we want to make people think about what’s going on and to see things in a different perspective.
NEWCLEAR WAVES • ALESSANDRO | from MANNEQUIN RECORDS | Life's a cycle. And music is part of life. At least mine.
COMBAT VOICE • The force of Combat Voice is that every track has its own ambience!
THE MARCH VIOLETS • I am pretty dark and twisted, and I have a dark sense of humour, but I also like some bright fluffy things and lots of different styles of music.
WHITE ROSE TRANSMISSION • We will never sell millions of albums, we might never play sold out venues, we will never reach the charts, but we might all end up in heaven!
KRYSTAL SYSTEM • I'm not sure I can even define my music myself
LA LUNE NOIRE • We are quite ordinary people, who just happened to be dressed in black most of the time.
ABSOLUTE BODY CONTROL • The new material fits perfect to the old one and we feel that in our live set where we are able to combine the old and the new ones.

Other reviews from LIZARD SMILE
LIZARD SMILE • 'I still see it as the expression of appreciation par excellence to buy a physical album. It still remains more ‘real’ … one way or another.'
LIZARD SMILE • Goth music has never been extremely popular in our parts - and certainly not in Antwerp
LIZARD SMILE • I think we succeeded in our aim and brought out a disc that makes a powerful impression in just half an hour.