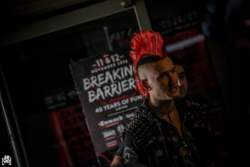 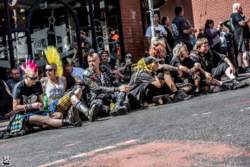 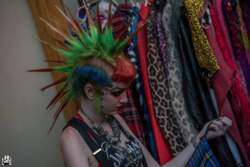 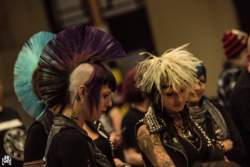 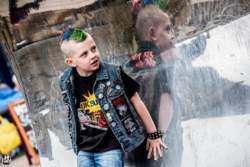 People who do not want to take a sincere position, should not think they have anything to do with punk.

How time flies. Punk is already 40 years old. But rest assured, a midlife crisis is still not in the making. According to an expert on the matter, punk will become at least 4000 years old. So it will be a celebration, and our expert - none other than Malcolm Nix, best known as DJ, concert organizer and opinion maker - will make it a nice three-day festival under the name ‘Breaking Barriers’.

Breaking Barriers will celebrate the 40th anniversary of punk. 1976 is obviously the year of the explosion of punk in England, but a lot happened before that, such as the CBGB scene in New York with the Ramones, Television and Patti Smith. Why did you choose 1976 as the birth of the movement?
One could say that punk can be seen as yet another event in a continuum of cultural resistance of which we find traces in the folk music of all past and living cultures, but that way of course there is no starting point that can be remembered. In itself, that would be okay, but people often tend to catalogue what they perceive in their environment. That is also the reason why there are so many genres and subgenres. Everyone catalogues everything because the amount of information is too chaotic for our limited brain. We can not deny the reality. At one point in time, a consensus emerged to call a certain movement punk, and so this starting point arose. We can discuss this for a long time, but we need to take a decision in the end. In 1977, all the pioneering bands were busy for a while, while in 1975 they were so isolated that there was no scene yet. So it has become 1976. Culture is not determined by the artists, but by the public. The artists are simply the intermediary between artistic content and the people who want to be presented with this content. In 1976, there were enough of those people to be able to speak of a movement.

You choose for a very British interpretation of punk, right?
No, I don’t. I just need to take into account the affordability of the bands, and then it automatically results in British bands. American bands, for instance, are far too expensive, even for a hall as Het Depot. Of course there are very cheap bands in many other European countries, but they are usually so obscure that no one will come to watch them, what indirectly explains their low price.

With The Damned, The Mob, The Ruts - actually the successor Ruts DC - and The Membranes, you were able to book a few of the bands from the first punk wave. Is the event meant to celebrate the bands from the early days?
I tried to find a balance between all kinds of tendencies. The Damned was an obvious headliner. It is a very famous band that has never played in Leuven yet. Ruts DC represent the link between old punk and reggae, which in later generations has been replaced by the link between punk and ska. The Mob represents the integrity of the overall DIY approach. They even refused to send a band photo, as they see it as star worship. The Membranes began in 1977, but achieved success only years later. They do no longer sound as in their early days. In other words, it's not about the age of the bands. It should just be musically varied and fascinating. At the same time, I must admit that there are few recent bands on the bill. This is partly due to lack of time, because it seemed meaningless to cram even more bands on the bill. Unfortunately, little genuine instant classics were released in terms of punk in recent years. I would really like to have a lot of new bands, possibly with one or two old heroes, but we repeatedly realised at Het Depot that you can not attract a lot of people with only the promise that the music will be good. Many people are unwilling to go to a band that they do not know yet. In the past, young alternative bands got many opportunities to build an audience in youth clubs and the likes, but that’s not easy anymore with all the norms and rules of today. Het Depot can play a role in this, but in fact there should be a small room in each municipality where music-conscious residents gather two or three times a month to watch bands that they do not know. Most people are too focused on fixed values. It will unfortunately take more than a little festival in order to change that.

Discharge headlines the second day. They represent the second wave of punk and were at the roots of crust and grindcore in the early 80s. Aren’t they an outsider on the bill?
Discharge actually exists since 1977. It is also part of that first generation, although it chose for a radically different sound later on. I do not see Discharge as an outsider, but as a logical consequence of the evolution that had already been initiated and from which it took the logical next step.

Our dear Belgium is represented well with Funeral Dress, Belgian Asociality and Zyklome A. Furthermore, Kloot per W and Elvis Peeters will do spoken words performances. Is this how you ‘support your local scene’?
Since most of those people live in Antwerp, I'm not sure if this is still really the ‘local scene’. But they are more than welcome, of course. It would be rather silly to organize such a festival and not try to get some of the best native representatives on stage. We do try to support the real local scene, as will become clear in your next question...

There is a remarkable number of additional activities for the festival: free performances by TV Smith - ex-The Adverts! - And Ulrike's Dream, as well as Bunkerleute goth party and a ska party on the day before the festival, and there is even a punk record fair on November 11th. It seems as if all of Leuven has to turn punk for three days…
This is exactly the way we try to support the ‘local scene’. We can not possibly give everyone a place on our own stage, but we can work together with others. The local scene should never be dependent on one single place. That has happened in many places and the disappearance of that single place immediately led to the collapse of the scene itself.

In my view, this is a festival for Leuven and anyone who wants to particiapte in the parties, can do so. In this way, we create a lot more atmosphere for everyone. There are of course major festivals with six or more stages, but this is much freer. You can grab something for free or linger at a specific spot. By attending the activities of the day before, no one has to miss anything. The bands in the Rockcafé, for example, begin only when TV Smith stops at cafe Libertad. I prefer to do it this way instead of a big festival with several stages where people are forced to choose between various venues where all the bands play simultaneously.

I can only hope that the public appreciates it and will not only come to Leuven for those few big names playing in our main hall. In my eyes, the additional activities are just as much part of the whole. Punk is often narrowed to fast songs of three chords, but this festival offers a lot of variety. We will hear both hardcore and oi, and even dub, reggae and lectures.

Are you happy with the balance that you have achieved?
It can always be better, right? But I am terribly happy. This is a dream bill, full of talent and charisma. We have no less than three bands that never really were on a Belgian stage and we have a band that wants to give us its first show in 31 years.

I would have liked to add a few bands that push the limits of punk further, but it must remain practicable. This is already hard for all the volunteers who ultimately form the backbone of our organization. At some point one has to draw a line and say that the program is good enough.

You also choose several very committed bands. Are punk and politics inseparable?
No, it's different. Everything is political. Every human interaction is a political act. People who think that a political position should be an opinion about government policy or so, are mistaken. Even the choice of a particular brand of bottled water is a political decision. In my eyes, punk is pre-eminently a critical movement, which automatically leads to political positions. I can formulate it differently: people who do not want to take a sincere position, should not think they have anything to do with punk. Blink-182 is not on the bill.

Punk in our region seems to attract an older audience, mainly. In countries such as Indonesia, Burma, Japan and even China, however, we can see strong and vibrant punk movements with young people fully opting for the punk lifestyle. What do you think about it?
I'm jealous. I can only hope that we can experience this here again. Well, young people over there can have a hard time being a punk, especially in Indonesia. That is obviously something I would not want to see here. When I look at those who are against punk over there, I can only say that they make things happen. Sometimes you must dare to be proud of the enemies that you have created. They are the sign that things are actually happening.

Finally, why do you conclude that punk will live for 4000 years?
It's just an estimate. I can be wrong by twenty to thirty years. I can see no reason why punk would disappear. Every year, millions of people flock to Athens to visit the millennia-old monuments on the Acropolis. Is the first album by The Ruts not an highlight in the history of mankind? I almost wrote ‘the history of human civilization’, but that must still begin, unfortunately. In any case, Punk is a firm first step in that direction.

CONTROLLED BLEEDING • I never really cared much about the business of selling records
DANIEL HALL • An artist is as good as their reference.
KOBAN • We really didn't have a sound we were going for initially.
FORCED TO MODE •
LAHKA MUZA • Bands like us were 'outlaws'
SIGNAL AOUT 42 • Don't worry, the sound of SA42 is tickling me again!
STRUGGLER • We had our dark days. It was the whole environment that set these marks on it but still, we also had a lot of fun.
DAGEIST • We find our motivation in sharing our music with the people and in the exchanges we have with the public. It is all happiness, because we only meet wonderful people.
THE ARCH • ‘The Game of Thrones’, inspired by the chaos of the Wars of Roses six hundred years ago in England, is actually still ongoing.
ARNWALD • The main sources of inspiration are my hate, my pain and my own fears