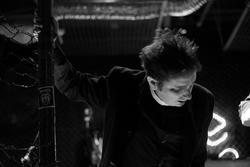 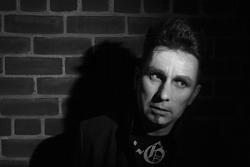 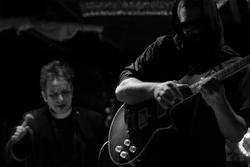 As a listener I’ve always been drawn to ‘difficult’ stuff, that’s the space where I’m at home.

Peek-A-Boo had a chat with the Toronto based band The Double Eyelid. They just released their album Seven Years and if you like Bauhaus, The The or Television (even if these band aren't influences) you should listen!

I’m sure not the first one to ask this, but why is a band called Double Eyelid?
I first heard the phrase ‘double eyelid’ when I lived in South Korea, around 2003. It’s a South Korean expression that is based on the way that East Asians look at the eyes of Europeans, because they notice that there is often a crease in the eyelid and to them that’s kind of exotic and weird. And while I was living there, people told me – ‘oh, you have double eyelids!’ – at first I didn’t understand what it meant and then once I did understand, I realized it was highlighting this thing that made me stand out, as a foreigner away from home. So there were weird feelings attached to that expression. When I first thought of using it as a band name, I was still in Korea, and in that context it made sense. Then I went home, but the name had stuck in my head and I still liked the way it sounded, so we became Double Eyelid.

You were formed during an experimental staging of Hamlet. Please explain that! What has Shakespeare to do with rock ‘n roll?
It’s a true story! A good friend of mine for a number of years had a space in Toronto, called ‘Siesta Nouveaux,’ - now demolished unfortunately - where she held punk shows and classical theatre, sometimes at the same time. She was planning a production of Hamlet, and she had the ingenious idea of replacing the ‘play within the play’ part with a band – so a band would come to the royal court and perform instead of a troupe of actors. But she was running the play for 6 weeks or so and obviously couldn’t get one band to commit to the whole thing. She was looking to get a different band in every week, and just phoned me to ask if I had a project … as it happened, I was just starting to get Double Eyelid together and that became our first set of gigs, 3 nights in a row as part of her production of Hamlet. It was a great way to start because there was a built-in audience – plus, the actors had to cheer for us … it was in the script, so they didn’t have a choice.

I guess if we have to categorize your music, we have to go for post-punk. You’re Canadian, is there really a Canadian postpunk (or any dark) scene or is it spread all over the country?
Are we post-punk? I’m not so sure about that. But yes, there is post-punk, goth, glam and darkwave music happening in Canada. Toronto has a fairly healthy scene. One of the early innovators in dark electronic music, Nash the Slash (RIP), was practically a neighbour of mine … there are some great bands around Toronto now as well, like The Scarlet Fever, Corpusse, Adaptive Reaction, and Ottawa and Montreal have their own darkwave scenes… There is also a west coast scene, but it’s so far away that I’m only aware of a few of the bands, like Koban… and from my eastern Canada perspective the west coast scene in Canada always seems more connected to the west coast scene in the US than it does to the rest of Canada,which is probably better for them anyway, there is a lot of great music happening now in Portland, for example.

Of course I hope you are forgiving me that I live in one of the tiniest countries in the world, but isn’t it extremely difficult to tour in Canada? I mean it’s a huge country with lots of nature, and I guess you need to drive endless hours from one big city to the other…
Yes it’s very difficult… but there is a level of difficulty in travelling between cities in Canada that we just are used to and take for granted. We were lucky to come from Toronto which not only is the biggest market in the country, but also is within a day’s drive of many of the other medium to big markets in Canada, like Montreal and Ottawa. We’ve really only gigged in that part of the country so far… but going to western Canada is something I’d really like to do.

When hearing your CD, I was thinking of bands like Television or The The. Can you see sense in that?
I’m aware of both bands and while neither one has been a big influence on us, I can certainly see the parallels. What we have in common with both, I think, is that it’s art for art’s sake, without paying much notice to current trends. Both of those bands – and Double Eyelid – definitely exist in their own sphere and make their own rules.

Is there a reason why the album is named Seven Years?
Of course… it got its name from the repeated line in ‘The Stranger’… but how it applies I’d rather leave open to interpretation. Like many of the other decisions I made about the record, it was more intuitive than something I can explain clearly.

How were the reactions?
Within a few days of releasing the record I got some feedback from a promoter who we’d worked with since early on – you know, a true supporter of the project who had become a really good friend to us over time - and he said something like ‘it’s great that you didn’t compromise your vision at all or dumb it down, it has a lot of artistic integrity!’ And at that point my immediate thought was ‘OK – this guy is a true fan and if this is what he’s saying then we’re completely fucked, no one else is going to like it!!’ Of course, a few days after that I was finding pirated copies online and so I knew that people were picking up on it. You have to understand that there was never really any choice involved. I had to make a record that I would be satisfied with, you know… that I could one day look back on from my deathbed and know that it had been something worth doing. That’s the only thing that matters. As a listener I’ve always been drawn to ‘difficult’ stuff, that’s the space where I’m at home. I’m very happy when I hear people use words like ‘innovative’ to describe our sound because it helps new listeners to approach us with an open mind. So, if we have fewer listeners but they show up actually ready to hear what we’re doing, it’s ultimately better for us.

You do a cover of Rozz Williams. A hero or is it because you’re in love with The Stranger?
Rozz resonates with me, hugely. What Bowie was doing, Rozz took to a whole new level of alienation and discomfort. It was very real and very unsafe, and you knew he meant it. And I don’t think there has been anyone else occupying exactly that space in music, ever. So we’ve covered Rozz twice now, actually – we did a weird piano and vocal cover of Spiritual Cramp as a B-side back in 2012 that got Rikk Agnew’s attention, which was kind of cool. I think the interesting thing about Rozz is that, like a few of the other true icons of goth, he was deeply flawed. And he never really got his due as an artist, so when you go through his catalogue you find that the production is often sub-standard, his backing musicians were sometimes not the best. So when I hear his stuff there is an incompleteness about some of it that leaves it open for a re-interpretation. And that’s why we’ve covered him twice, now – because both times there was something I thought we could bring to the original.

Let’s end with two questions I always ask. What’s your favorite record of all time and please state why!
Tough question… today my answer is Sheer Heart Attack by Queen because I think it is an amazing little capsule of four creative geniuses in a golden moment before they were spoiled by their success. On Sheer Heart Attack they had all the elements that would make them massive, but they weren’t there yet. You can hear that they are poised on the brink of something huge, it’s just saturated with their star quality to the point that it’s dripping through the very grooves of the record, but they’re still trying to convince themselves that they deserve it so there’s something very pure about it that is golden. It also has a ‘throw everything in but the kitchen sink’ quality that I can relate to as an artist, they went ‘all in’ and didn't care if it sounded ridiculous. They were my favourite band as a teenager and this was their best record, no question. Honestly, though I don’t really have a favourite record. I’ve got at least 20 records that have been life-saving to me at different points in time.

With whom wouldn’t you mind to be alone in an elevator for 8 hours and what would you do then?
8 hours is too long for me to spend alone with anyone, so I’d take the stairs – but if you forced me, I’d pick Macy Gray; we’d smoke weed and I’d enjoy being hypnotised/seduced by the sound of her voice. Either it would be a fun 8 hours or we’d set off the smoke alarm and get out of there quicker. There’s about a 5% chance one of us would freak out and kill the other, but it’s good to live dangerously sometimes.

The last words are yours.
I have no last words because I feel that our music should speak for itself, so I encourage the readers of Peek-A-Boo to go to one of our various websites and have a listen. Thank you for your questions.

TRACER • I usually do not give much explanation to the lyrics, I do not want everything to be ready-made
STATIC DAYDREAM • I'd be doing myself and our fans a disservice if I changed what I do, simply based on fear of critics or something. I just try to make music that I'd like to hear.
BLAINE L. REININGER (TUXEDOMOON) • My future plans are to keep doing what I’m doing until I can’t do it anymore.
THE POODLES • We have the luxury to play every night and to do what we loved to do.
DRACONIAN • We wanted Heike to be a part of the creative process, and so we wrote the vocals together.
SUICIDE COMMANDO • I thought it was about time to show the newer generation that Suicide Commando has more to offer then just “Bind Torture Kill” or “Die Motherfucker Die”.
AMARANTHA LABLANCHE • 'When all the crazy shit like touring and traveling is over I just really want to come home.'
SHERMAN • In Belgium upcoming musicians are treated much better.
ANTIMATTER • I am singing about myself, but I know most people will relate to what I’m saying anyway.
MIRLAND • I feel it’s a cultural catastrophe that music is slowly turning into muzak