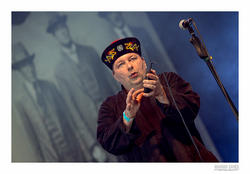 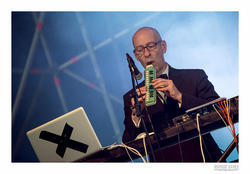 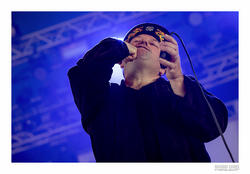 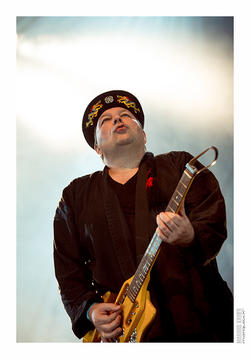 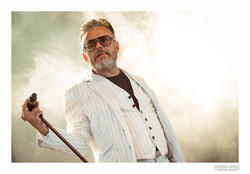 The new album by Arbeid Adelt! is sublime, all other words are just superfluous! Peek-A-Boo is pleased to have had a chat with Flanders' greatest punk (and that's Marcel Vanthilt still today!)

From the first second I heard Popcornmario, I had the feeling that Arbeid Adelt! has reinvented itself. The sound is familiar, but it all sounds fresher than ever before. Do you feel that too?
Reinventing ourselves was the intention, yes. Without thinking, going back to the source! And that was: a rolling, pounding bass lines on angular rhythm patterns, spiced with sharp guitars and free jazz sax, Complemented with Flemish lyrics, but that do not sound Flemish!. That's what we wanted. So we started with one rattling bass line on one square rotating rhythm box and there it was: Popcornmario. The title has everything to do with Record Store Day. The record shop Popcorn is run by the incredibly passionate Mario Margodt who released our picture disc. The text is a tribute to all those new wave DJs from the 80s and the vinyl fanatics of today. It's a crazy world of connoisseurs, amateurs and collectors, all united in the love of vinyl, It’s the plastic wheel of disco, from Chernobyl to Brazzaville!

The new album has hit potential, but never before you were so experimental as on Slik. You can clearly hear the punk roots of Luc Van Acker and Jan Vanroelen’s experimental touch. I thought this was not so explicit on your previous albums.
Indeed, we had some pop hits (De Dag Dat Het Zonlicht Niet Meer Scheen, Lekker Westers or Stroom), but that never was our goal. Writing for the charts is just ridiculous, you want to please everyone and at the end of the day it does not work. So agreed: we just do what we want do, no concessions. That goes perfect on stage when we improvise, like on Death Disco. So we did this at home: improvise, experiment and see how far we could go. I think Asta Astra is the best example, it stands like a building block. Also Niemandsland and Navardauskas are pure improvisations. For us this works well. Of course there are some radio friendly songs on the album (Sarmakarma, Mediterranee, Bedankt En Tot Ziens), but we don’t have the urge to be played on the radio. This poppy side is present in Arbeid Adelt! But I particularly like the bolder tracks!

You do not have to know much about music to hear that the production made this record a bomb. How did you get in touch with Arne Van Petegem?
The contribution of Arne Van Petegem obviously was crucial. He had to control three unguided missiles (Jan, Luc & I). The three wanted the lion's share. He was a fan of Arbeid Adelt !, which helped of course, especially as he is a fan of the crazy things we did. He understood very well that less is more, and so he threw away all the unnecessary synths, saxophones, guitars and vocal parts and only kept the essence. We wanted him to do that, and so he only used dubechoes, and no plug-in effects. We also wanted to keep it as straight as possible. Moreover, Arne, is like us, totally obsessed by vintage synths from the 80s. On the new album you can hear lots of old Korgs and mini-Moogs. What a fat sound that is!

I hear a lot of influences from the 80s, and of course this is very normal, but one hears that you want to progress. I suppose this is not always easy, because lot of people want you to be a nostalgic jukebox, not?
That certainly was a sore point. What are we doing? Being an 80's jukebox or a group of the 80s that wants to look forward to the 21st century? The latter of course! Especially, since today there is much more possible in music. The business is over, record sales are not good, but... the young generations don’t think in categories as we used to do! So, there is more room for music that is different from the charts. Due to the rapid communication like YouTube and the social media you don’t even need the traditional radio and television! That doesn’t mean that Studio Brussel (Belgian radio station-ed.) shouldn't be more daring, because they have become very mainstream. Fortunately, we don’t need them and we are also trying to get some gigs in the Netherlands!

In fact, are you nostalgic people?
I myself am often nostalgic, I especially like times I haven’t experienced myself, like the 20s with the foxtrot and the charleston, or early jazz. Or the period between the two world wars, that seems to have been a very wild time in Berlin, Paris or New York. All men wore beautiful suits and the cars were big and graceful, I love that black & white atmosphere. The 80s, our time so to speak, was great too, but I’d like to say some things about that. Brussels is now better off than then. Just think of the AB (a venue in Brussels-ed.), what a wonderful place, renowned in the world! That was not there in the 80s! Nostalgia is good for happy memories, but the past wasn’t better. When my aunts used to talk about 'the good old days ", I found out that in those times people were hungry, there was war and they were bored. In short, the good old days don’t exist, never!

The best song you've ever made is on the new album: Bedankt En Tot Ziens. I almost got tears in my eyes when I heard it, it's like you’re laughing with your own stardom. Right?
It is indeed about the impermanence of everything. "There are times that people will avoid you" means that one day you're not hip or fashionable any longer. It happens to every musician, every artist, every person who is doing something creative. On some day you're at the end of your story, the outside world no longer likes you anymore. That is very painful, often unavoidable. But... that’s why you actually have to reinvent yourself continuously. Just as we have done now. Otherwise it was goodbye for Arbeid Adelt! as well.

In Belgium, everyone likes you as you’re a friendly guy. Even my mother knows who you are, but I feel (or at least I think) that you want to scream it out that you no longer agree with this selfish society.
I've always had that. Although I love luxury and comfort, I never want to be the slave of my wealth and consumption. I can be happy with almost nothing: a bed, a place to make some music or write, some bread, cheese and wine, et voilà: life is perfect! Capitalism does not make sense, it breaks the planet. I don’t understand selfishness. How can I hate someone because he doesn’t think like I do? It’s that kind of warped thinking that causes the greatest conflicts today. There always was narrowness, but today I fear it is getting out of hands! Every religious or ethnic conflict relies on ignorance and hatred, while I always thought that religion has to encourage people for charity, apparently not.

I always will associate Arbeid Adelt! with the fear of the 80s, the Russians, the atomic bombs... Now you're back and paranoia is back again! Do you agree?
Absolutely! The Cold War during the 80s was nothing, if you compare it with today’s burning world. We say in a lyric "Is there anyone still a communist?" and that indicates how much the times have changed. In the 80s the communists were the big threat, today only the North Koreans are communists and we laugh with them. The Russians are capitalists and China is on its way to become the strongest economic power of the planet, they only think in terms of progress and consumption, communism is completely forgotten over there. A communist is some kind of extinct species, but you do get lots of other “-ists”: Salafists, jihadists, extremists, terrorists... And, let’s not forget the motorist who is everywhere!

You already said it: the past was not any better, but then everything was possible, now everything has to be obedient. Is that not a brake for Arbeid Adelt !, even though you make experimental popsynth, you also will agree that you are in the first place a punk band!
Yes, the punk philosophy always has been a vision of life, a very healthy and stimulating vision. Do not let others shit on your head, be creative and do what you want to do, follow your own inspiration and not what others or radio stations like Studio Brussel tell you, see that you are unique, it remains quite liberating. Even if you are older, with children and a household, even then you should be like that! Say what you think, make your point and fight for it, you’ll die anyway, you'd better make something interesting of it!

You soon will start a tour. Give us one good reason why we should buy a ticket?
Because we work with vintage synths and rhythm machines, they really sound sublime through a big PA! It pounds, it's danceable, but it is also avant-garde and catchy, funky and jazzy. Suppose you're 25 years old and you love Goose, then go see Arbeid Adelt! and you’ll fall in love, even if sometimes you might think "what the fuck!". Not bad at all, that's the idea. We are the most whatthefuck band from Belgium!

With whom would you not mind to be 8 hours in an elevator, and what would you do then?
In my case, surely with a woman. Eight hours is long, you can’t spend that time with chatting, so you have to find something else to kill the time with. I am thinking for example of Evelien Bosmans or Barbara Sarafian (Belgian famous actresses-ed.) They are both very intelligent and, I suppose that they can make the best of it, in a physical way!

Last question, will there ever come a day that the sun no longer shines?
For each of us, silly mortals, anyway. Whether this will ever happen with our solar system is not clear yet. In my opinion, this will happen probably next year on a Tuesday in May. But maybe not, we'll see.

DOUBLE EYELID • As a listener I’ve always been drawn to ‘difficult’ stuff, that’s the space where I’m at home.
TRACER • I usually do not give much explanation to the lyrics, I do not want everything to be ready-made
STATIC DAYDREAM • I'd be doing myself and our fans a disservice if I changed what I do, simply based on fear of critics or something. I just try to make music that I'd like to hear.
BLAINE L. REININGER (TUXEDOMOON) • My future plans are to keep doing what I’m doing until I can’t do it anymore.
THE POODLES • We have the luxury to play every night and to do what we loved to do.
DRACONIAN • We wanted Heike to be a part of the creative process, and so we wrote the vocals together.
SUICIDE COMMANDO • I thought it was about time to show the newer generation that Suicide Commando has more to offer then just “Bind Torture Kill” or “Die Motherfucker Die”.
AMARANTHA LABLANCHE • 'When all the crazy shit like touring and traveling is over I just really want to come home.'
SHERMAN • In Belgium upcoming musicians are treated much better.
ANTIMATTER • I am singing about myself, but I know most people will relate to what I’m saying anyway.

Other reviews from ARBEID ADELT!
ARBEID ADELT! • May I now finally mouth your girlfriend or what?
ARBEID ADELT! • During our performances this summer, we will supplement many classics with vintage-80's tapes and new songs!