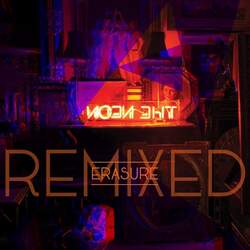 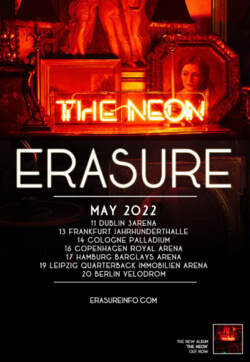 "Hey, Janos, there you go..." It's cool to be in email contact with Vince Clarke, founder of bands like Depeche Mode, Yazoo and Erasure. He may not be a wordsmith, but good-humouredly, the living synthpop legend had answered my questions before he went on a well-deserved vacation. At the end of October he is going on a tour through the UK and Europe with his long-time bandmate, Andy Bell. As a small appetizer for the upcoming concerts, Erasure's latest album "The Neon Remixed," will be released at the end of July, featuring remixes of their 2020 work "The Neon", as well as a brand new track "Secrets". Certain electropop tracks are often more successful in remixed version and sometimes sound better than the original. This genre of music simply suits remixes well. The same goes for Erasure. Although I'm not a big fan of remixes from the last two decades, this time I was very pleased with what I heard. The remix of "The Neon" includes partly complete new productions, partly extended maxi versions in the classic sense and of course there are enough tracks to dance along to. "The Neon" is also remixed and in this revised version it is pure electropop perfection! "The Neon Remixed" features reinterpretations from artists like Kim Ann Foxman, Hifi Sean, Octo Octa, Paul Humphreys (OMD), Andy Bell & Gareth Jones, Brixxtone, Theo Kottis and others. My first question to Vince Clarke was of course about this upcoming remix compilation.


One year after the release of your last album „The Neon” its remix version will be released at the end of July. Whose idea was this remix compilation? Did you want to take a new turn with „The Neon” songs to take them in a new direction or was that the idea of the record company?

Vince Clarke: The remix album was the idea of Mute Records. They wanted to extend the ‘life’ of the album, hopefully right up to the start of the „Neon” Tour.


Old friends and colleagues of yours, like Paul Humphreys or Gareth Jones, as well as a lot of new DJs and remixers can be found among the participating artists. Who selected and requested them for these remixes?

Neil Blanket from Mute came up with the list of remixers. (Author's note: Neil Blanket is the Head of Marketing at Mute.)


The „Violate Flame” album also had a similar remix version, but my favorite one is still „The Two Ring Circus”. I would be glad to hear that stunning remix version of „Leave Me To Bleed” by Vince and Eric Radcliffe live one day in my life. Are there any such remixes from your back catalogue, which you think are even better than the original?

I’m very fond of Orbitals remix of „Ship Of Fools”.


As mentioned before „The Neon” album is already one year old. How did it affect you the last time you heard it? Do you still have the same favorite songs on the album? By the way, what are your current favorites?

I tend not to listen to an album once it’s been released, unless of course I’m preparing tracks for our up and coming tour.


This year there is another anniversary in the history of Erasure: Your debut album „Wonderland” was released 35 years ago. Many of the fans think that your current album has a lot in common with your first album. Have you noticed any similarities in the sound or in terms of the production work?

I think there are similarities. Both albums are upbeat and positive looking and the sounds and arrangements are less cluttered... I think...


This October you are going on tour according to your plans. Have you put the new setlist together yet? Which are the songs that already have a fix place on the setlist?

We’ll obviously be doing songs from ’The Neon’, a few old favorites and a couple of lesser known tracks from our back catalogue.

There’s a rumor that Andy wants to sing the Eurythmics classic „Love Is A Stranger”. Are you planning to perform this cover version on the upcoming tour?

In these Corona times it is difficult to make preparations for a tour. When can you meet each other to rehearse live?

We start rehearsals in London, two weeks before the first show in Scotland.


At your London concert you are going to have Blancmange as the opening act. I have always liked their music and a lot of fans know about the contact with Depeche Mode (Blancmange were the opening act on Depeche Mode’s 1981 and 1982 tours) and with Vince. Vince, you remixed „Living On The Ceiling” a few years ago and your fans are also eagerly awaiting the joint work with Neil Arthur. Where is this project lying right now?

We’re hoping to finally mix our ‘collaboration’ at the end of July although it rather depends on UK and US travel restrictions.

Vince, you’re also a label manager and host of an online radio show about the world of synths. Is there any news from the home of VeryRecords?

And let’s not forget that Vince’s son Oscar has just released his debut work. Vince, please tell us a few words about this record and about your possible involvement on it.

I contributed very little. My son did pretty much everything including getting it on Spotify etc.


Back to the subject of touring. You are giving six concerts in Germany during the forthcoming tour in October. The German fans have always been very loyal to you. Do you have a story in your mind about Erasure and Germany that you still remember?

Our very first show in Hamburg comes to mind. We played a venue called the Markthalle which was probably about half full. We were not well known in Germany at the time but I remember the audience was amazing.. so warm and enthusiastic.

The fans are still waiting with great enthusiasm to finally see their idols live on stage again. Hopefully the Corona situation will get better and then we can enjoy Vince and Andy on a concert! See you there!

It is with a great deal of regret and frustration that, on the advice of the promoters of the upcoming shows in Ireland, Denmark and Germany, Erasure have made the difficult decision to move those shows from October 2021 to May 2022 and the new schedule looks like this...

The reason for the move is, of course, the ongoing uncertainty around the Covid-19 situation, and although Vince and Andy would love to play the shows in October as originally planned they do need to be absolutely sure that the band, the crew and the audience can do that safely.

If you have already booked tickets for any of the shows then your tickets will remain valid for the new date (the only venue which has changed is Berlin and your tickets for that show will also remain valid for the new venue), and everyone with tickets will be contacted by the ticket agent shortly with all the information they need concerning those changes. General information about those shows, including ticket links should you need them, is available on the Erasure website.

BLACK ANGEL • Interview With BLACK ANGEL
THE IMAGINARY SUITCASE • For most of my life, I have behaved the way I thought they wanted me to behave. And this is a scam.
BODY DIVIDE • I’m a masochist. I think a lot of people fear it...
TERMINAL SERIOUS • I ask myself time after time: can love still save us?
THE LOST INTERVIEW WITH KELLEY DEAL ( THE BREEDERS ) • Peek-a-Boo publishes the interview with Kelley Deal that seemed to get lost for a long period of time - since it was made in 2018...
BLEEDING RAVEN • Never really took myself serious... still don’t...
DIVE • We All Can Ask Us The Question ‘Where Do We Go From Here?'
MAMAN KUSTERS • ‘Let’s Keep It Intriguing
RAYMOND WATTS (PIG) • 'It’s not a re-discovery. It’s finding the way in to let the stuff out...'
JOHN 3:16 • I regularly come across animal remains at various stages of decomposition. That started to affect me, and that's where the concept of the record was born.