'For me, music was important, because I can lose myself in it and find comfort in it.'

The individual struggle to survive in our hectic society is a topic that does not only inspire a lot of books and articles but also music. The new album from Psy'Aviah - 'Lightflare' - is built around this theme. We asked Yves Schelpe about his inspiration and his motivation for making 'Lightflare'. 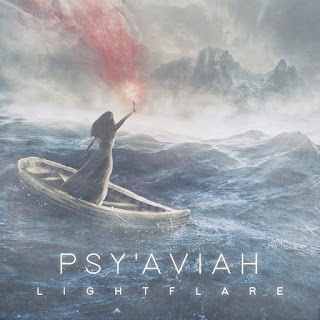 Hi Yves. Your previous album 'Seven Sorrows, Seven Stars' was based on the movie Interstellar. Your new album 'Lightflare' also has a concept. You want to tell a story with it. Can you tell us more about this?

Since 2014 with 'The Xenogamous Endeavor' - which was also the start of a ‘new period’ for Psy'Aviah - but that’s another story - I like to use a concept to connect all songs to a bigger story - if only because then there is a 'red thread' for me, both in artwork, lyrics and sound...

This is also the case with 'Lightflare'. The story is the individual himself and how he struggles in his or her existence. From the deepest, darkest feelings (like 'Ghost' or 'Lonely Soul'), to reflections and trying to place those feelings ('Heavy Heart', 'Lost At Sea', 'The Great Disconnect') to a recovery ('Aftermath', 'For Myself') and perhaps an ultimate happiness that we may experience from time to time ('In The Sound', 'Sound Of New'). In that sense, 'Lightflare' with its cover might be how I've experienced the Western world for a number of years - sometimes reduced only to 'millenial generation' but I think that more people suffer from it. This is something that the opening song 'Lost At Sea' and also the cover image of the album try to show: 'the balance', 'the search'. The character, on a small wooden boat in a swirling ocean with a view of land in the distance, sends out a cry for help.

Your new record gets inspiration from a depression that you have experienced. Depression has become almost a new epidemic and threatens to become the disease of the current century. Can you tell us more about what happened to you? 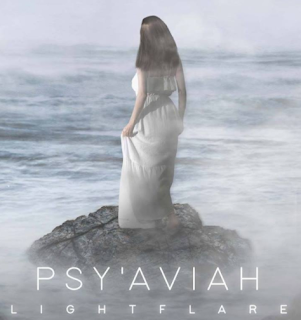 I don’t like to use the word depression when I talk about my trajectory in the past years, as I do not know if that 'label' fits. And perhaps it is inappropriate to others. As I said in the previous question, it is more the 'searching' and a certain form of 'getting stuck' in a society that is too rigid for me, that makes me feel less in the right place, or makes me feel bad about myself. As a result, I also changed jobs - which also made me realize that this was not the right solution.

I think, but with the emphasis on 'thinking', that I was close to a form of burn-out, by often working hard, late and passionately but receiving too little in return - or to see too little movement in certain organizations. This means that you do indeed start to feel bad because you lose the reason for doing something - the ‘sense’ of your existence in that system - and you have the feeling of being alone in that battle.

But I would not call it a 'depression' in itself. Maybe there was something insidious but music and my girlfriend always kept me going, motivated and so on...

How difficult is it to put your personal feelings into something and still stick to an overarching story that you want to tell? Do you feel a contradiction?

Feeling is always the basis of every song for me, whether it is a dance track like 'Before I Die' with Junksista or 'Reboot Reset Relay' on the recent album with Fallon Nieves', or a trip hop / synthpop track as ‘Plan B’ with Kyoko Baertsoen or 'Lonely Soul' with Phoebe Stone. Feeling and emotion must always be there, both in text and in supporting music and sound. Otherwise, I would not be able to live with what I produce. Once I have chosen a theme, it is also not difficult for me to write songs for that theme. There is always enough to tell about aspects - you can zoom in, work on a micro level - or just get very cynical. Autobiographical or not, that is another point - but in any case there is always a part of yourself. Whether the song is started from your own experience or from an experience that you have seen and in which you can empathize or 'imagine something' with - you will achieve feeling and emotion. And that is always a starting point, which I refuse to deviate from. 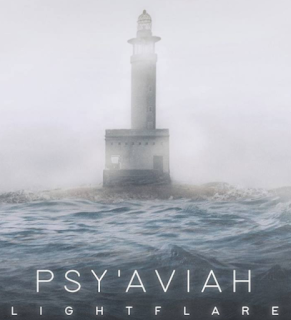 You write most lyrics yourself but some lyrics are also written by your guest singers. How did you manage to stay within the story and concept that you wanted to bring?

Before I asked Ellia Bisker or Michael Evans for example, I told them what the concept of the album was and what feeling I had with a musical demo. I send them the already existing demos and songs so they have an idea what the concept is. If I do not like something, or if I think that something could be added - there is room for mailing over and over and experimenting. That creative process is pretty easy for me, and I notice that this has worked for both Ellia and Michael.

It goes even further than that, because also the person who took care of the artwork - Tomoki Hayasaka - gets tons of information and concept sketches and moodboards from me in order to create the images in his unique style. Tomoki is, I must say, a hugely talented, patient person who really knows how to translate my ideas and mood. But to come back to your question: ‘how does it work’: through dialogue, clear agreements, respect for each other's background and by feeling each other.

Music therapy is an important part of the concept of the record. What do you think is the power of music to help people who feel lost?

For me, music was important because I can lose myself in it and find comfort in it - either by writing it myself or by listening to music from others. You feel a kind of recognition that you are not alone, I think. But it does not have to be music, I think that all forms of art can offer a form of consolation, every person has different interests and for some like me that is music - but also a good book, series, poetry, exhibitions, etc. that treats certain thematics and approachs them with respect. They can help you to heal and to sort things out. But 'consolation' and 'recognition' as in 'I am not alone with this feeling' is I think the power, regardless of the art form. 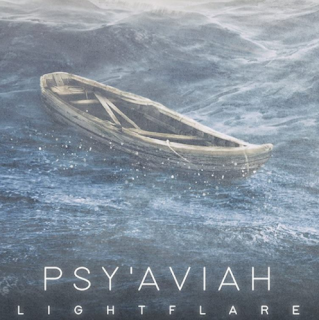 Musically, I hear new elements on 'Lightflare' again. I notice that there are often different vocals running through each other on your new compositions. I think it is great. Are you satisfied with it?

Thank you for the compliment. I myself am very satisfied, although that may sound arrogant. It worked both for 'Lost At Sea' with Mari Kattman and at 'The Great Disconnect' with Marieke Lightband. There are other songs on the album that do this but with these two, these elements play a big role. For me, it is a way to emphasize the melody and emotion through the voice more than with a synthesizer or guitar. The very human theme on this album also means that the voices are essential on the album, and they should fit in with the story. There is a 'behind the scene' video on YouTube in which Mari Kattman explains how we worked together on 'Lost At Sea' - it gives a good impression of how I work with people.

I also hear more guitar. I do not remember that guitars were so prominent on your previous records...

That’s right. I found that guitar did not fit on an album like 'Seven Sorrows, Seven Stars' - the sound there had to be really electronic to emphasize that gruesome space journey and the mysterious. On 'Lightflare', there are more songs where no single synthesizer could convince me to give the same power as guitar and when a song calls for it in my head, then it will get guitar. I am not aversive to guitar, far from it. It is fully exploited during live shows because it gives an extra dimension.

You have a solid live band with singer Marieke Lightband and guitarist Ben Van de Cruys but the number of gigs is rather low. I can imagine that you find this quite frustrating, especially since your music is quite successful on the dance floor and gets good reviews. Why do you think about this? 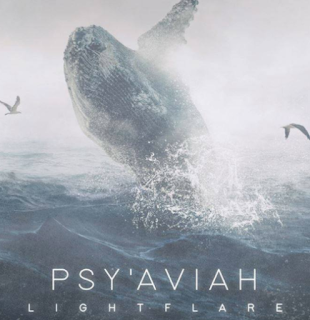 That's a good question and it's a strange feeling. I get great reviews on this album, just like the previous ones - for which I am extremely grateful. When we played live, we noticed through reactions and discussions afterwards that the appreciation was there. We are played at DJ sets & podcasts abroad - in the US, Canada, Australia, Mexico, UK, Poland, Russia, Sweden etc... Most of the proposals for performances are currently from the US, Canada and the UK - but it is not always easy to arrange it logistically - which is unfortunate for them and for us but we are looking for a solution... A 'live-streamed' concert is certainly on it’s way.

The only explanations I can find is that in order to play in Belgium or the Netherlands there is a barrier and much political 'play', 'envy', and the disappearance of subsidies, especially in the Netherlands. The other explanation is that we have a less typical 'electro-indsutrial' sound - and that some bookers / promoters apparently are confused with a band that sometimes has some variation. We are not alone in that, I think - look at Faithless with their trip hop, rap and also their dance songs… Look at Moby, Röyksopp, DAAN, Praga Khan, et cetera but those are only my ideas, you should really ask the organizers.

In any case, we will not stand still and plans are there to do a performance with Junksista this year, and some other events that I can not say much about... keep an eye on us or contact us if you want to see us somewhere live !

LACRIMOSA • When I made ‘Testimonium’ I was kind of in trance.
SOFT RIOT • Jack Duckworth talks about Soft Riot
TREPONEM PAL • ‘SOBRIETY, POWER AND ORIGINALITY’
ELEKTROSTAUB • 'I think it will be almost impossible to combine all the artists into one single concept.'
DIE FORM • I would like to be optimistic and positive, but the world seems to move inexorably/blindly towards a sombre future, towards chaos.
KIM LARSEN (: OF THE WAND AND THE MOON:) • Symbols still carry personal meaning to me.
DONDER, HEL & HAGEL • Thunder, Hell & Hail!!! You bunch of fresh water pirates!!!
LIVINGTOTEM • ‘INDUSTRIAL INFUSED ROMANTIC TECHNOID MUSIC’
MESH • Richard Silverthorn Of Mesh On “Gothic Meets Classic” And The “Live at Neues Gewandhaus Leipzig” Album
KMFDM • Sascha Konietzko Gives Us The Latest On KMFDM

Other reviews from PSY'AVIAH
PSY'AVIAH • Continuing with albums with guest singers was a natural evolution for me
PSY'AVIAH • 'You cannot label our music. It's Psy'Aviah-music, that's what it is'