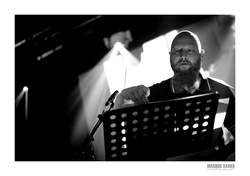 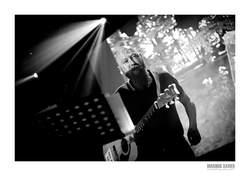 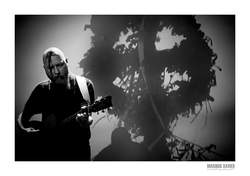 KIM LARSEN (: OF THE WAND AND THE MOON:)

Hello Kim, for starters, let’s talk a bit about your project Les Chasseurs De La Nuit, which will have a live premiere at the Dwaalspoor festival. Mark Liens is your alter ego, a clear anagram of your real name. Is it just for fun, or is this alter ego different according to Kim Larsen himself?
It was just for fun and to keep the project a bit more anonymous when I started out. A way to freak out a bit more without having paralels with my main project Of The Wand & The Moon but seemed too difficult to keep it a secret along the years.

How would you describe Les Chasseurs yourself, not only the music, but the project itself?
Guess I would let the music and imagery speak for itself. It's a riddle, wrapped in a mystery, inside an enigma.

Together with Thomas Bøjden you started Vril Jäger in 2016. The influence of Vril Jäger lives on on Les Chasseurs’ latest album Nebel Leben. Is it a logical effect because you were working with both projects?
Yes, we originally began the project as a collaboration between John Murphy, Thomas Bøjden and myself. Thomas and I loved John's Shining Vril project and thought this might help to get some live shows for John's project and we could help out live as well. Unfortunately we lost John before we could get him in the studio for the album. I still have some drum tracks that John did for The Lone Descent that weren't used. So hopefully he will make an appearance on a Vril Jager song after all some time in the future. The name Vril Jäger was a combination of Shining Vril, Les Chasseurs de la Nuit (hunters of the night) and written in German as Die Weisse Rose, but yeah, most tunes on the latest Les Chasseurs de la Nuit album were already recorded in 2013 and then finished in 2016. As I was working on the Vril Jäger album at the same time. The genre of the music also overlaps a bit so thought it might be fun to have some references going between these albums.

It’s been awhile since :OTWATM: released new work but you never stopped touring. I know you’re a very busy man, so are there already plans for a new :OTWATM: album?
Well, since the last album I released 'Live at the Lodge of Imploded Love' (CD/DVD10"),'Shall Love Fall From View? (7")', 'I Called Your Name' (7"), "Tunes For A Twilight Tears For A Lifetime" (Cassettes and LP) and soon a new 7" called "Time's Out Of Reach". So there has been work done but I guess there has been some time since and actual album. Honestly I thought while working on The Lone Descent that it would be my last album. It drained me personally. Emotionally and physically. Anyway, it seems songs are beginning to come together at the moment for the next album. I don't want to say too much at this point as I don't want to jinx it but hopefully all things will fall into place soon.

As “the harderst working man in neofolk business”, which I called you in one of my reviews in the past, you probably made contact with lots of interesting new bands in this genre. Do you have some insider recommandations for our readers?
As I mentioned I don't really listen to that much music within the genre. Or at least I don't seek it out. Or I have forgotten new stuff at this moment. However, we recently played with Swedish "Grift" in Poland. He had some nice tunes which reminded me a little bit of early acoustic Ulver. Very nice. Also got some stuff sent by Clayton Ruby of Burial Hex that sounds beautiful. Which in turn reminds me of the compilation from the label Brave Mysteries, a lot of friends and nice music on there.

:OTWATM: has grown to one of the most important bands in the genre, next to heavyweights as Death In June, Sol Invictus and Current 93. How do you feel in this position, and does it create some kind of pressure when it comes to recording new material?

Thank you for the kind words. The only pressure or what to call it, is towards making the music sound as good as possibl and to make myself satisfied. Not other peoples expectations. I am not a person that can release an album each year. Not if it has to be satisfying to myself.

Let’s hear it from the master himself: what if push comes to shove, is the best dark folk album of all time, according to you?
The album that meant the most to me is "Roseclouds of Holocaust" by Death in June. It captures something profound melancholic and ice cold discouragement that I haven't found to that extend in other albums. It strikes something very precise and very puzzling at the same time in me. Guess "What happens when Symbols Shatter?" is the sister album to this but if I can't choose 2 albums then it must be "Roseclouds...".

You have a background in the metal scene, how did you make the step to the dark folk genre?
An old school buddy of mine played "Thunder Perfect Mind" by Current 93 for me and it changed everything. I knew when I heard it that this was it. I tried to incorporate it into my first real band but the ideas became too many and the other band members didn't have the same interest in this music. So I started Of The Wand & The Moon.

You always use a lot of pagan influences and runes, is this just for the symbolic aspect, or is it something which defines your everyday life?
I probably studied these things more intense in the past but I still love seeing signs here and there in everyday life. And the symbols still carry personal meaning to me. Personal as in personal.

DONDER, HEL & HAGEL • Thunder, Hell & Hail!!! You bunch of fresh water pirates!!!
LIVINGTOTEM • ‘INDUSTRIAL INFUSED ROMANTIC TECHNOID MUSIC’
MESH • Richard Silverthorn Of Mesh On “Gothic Meets Classic” And The “Live at Neues Gewandhaus Leipzig” Album
KMFDM • Sascha Konietzko Gives Us The Latest On KMFDM
NERVENBEISSER • ‘WE'RE DOING OUR THING AND WE'LL KEEP IT THAT WAY’
MILDREDA • 'It's is very nice feeling to let dark bombastic music hit an audience'
DER HIMMEL UBER BERLIN • ‘EVERYTHING IS FASCINATING IN DARKNESS’
SCANNER • ‘FAILURE IS ALSO AN ESSENTIAL PART OF ANY SUCCESS’
EUFORIC EXCISTENCE • Euforic Existence: We like to be put under the heading of EBM, but realize that we are an outsider. I would not want anything else.
GEORGIO 'THE DOVE' VALENTINO • 'Everything I've learned I know from records... (though I often misheard the words)'