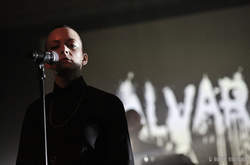 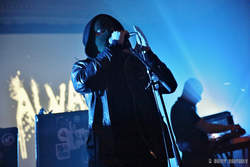 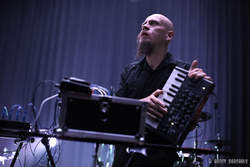 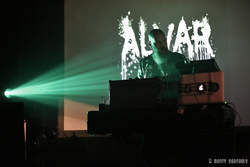 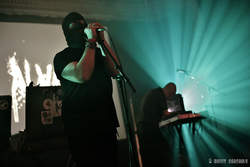 Alvar is a Swedish rising star band that somehow manages to peek-out above the masses of mediocre electronic underground music that's been fired upon us since decades now. In 2017 they were selected by the audience as winner of the Dark Demons BIMFEST preselections and thus, later that same year, they opened BIMFEST. Surprising friend and foe (again) with their dark but stunning gloomy performance. With a new album out we thought it would be a good idea to have a chat with these nice Swedish people.

For the lost souls who haven't heard of you yet and might wonder… What does Alvar stand for? Both musically and philosophically?

Johanna: I think if you listen to our music you could easily trace some of our philosophy about life even if we tend to mostly talk about bad things.
Jonas: Musically I guess we want to make something that is us. Something that we have missed. We want Alvar to be really intense and for real. From the start it was way more experimental and mostly only about noise. Now it sounds a little bit more like tracks. Maybe not verse-refrain-verse-refrain kind of music but still a little bit more than just noise I guess.
Johanna: We should never make hits. That is our philosophy.
Jonas: Never make hits on someone else´s terms.


Can you please introduce your (live) band members and their role/function in Alvar?

Johanna: Well in fact both our live members have become full on members in the Alvar forces for a while.
Jonas: And to introduce them, Fredrik is also the man behind names like: Severe Illusion, Boar Alarm, Analfabetism etc. In Alvar he has brought along a whole lotta rock n´ noise.
Johanna: The other one: Jimmy also has some other projects. Like: Nuclear Sludge and Yabibo Hazurfa. As a member he mostly plays/bangs on metal percussion.


You have just released a brand new studio album on Daft Records ‘I Sew A Blanket Of All The Broken Clouds’. Your second album release on this renowned Belgian label led by Dirk Ivens. How does it feel to have your new album released on his/this label?

Jonas: It´s of course a big honor, we are old Klinik fans... Maybe one of the most important bands for me at least. And it feels nice to be part of Daft, Dirk is both a big influence as well as big help for us. And it´s nice to share a drink together sometimes.
Johanna: Actually there were some other labels interested in releasing the new Alvar album. But we, as a four piece democratic band, felt we wanted to go with Dirk. We know him now and we trust him.

On BIMFEST 2017 you performed a Suicide track together with Dirk. How did that idea happen and how was this unique experience?

Johanna: It was Thobias Wollhed at Bodyfest Stockholm who asked if we wanted to do something together at their festival October 2017. Dirk chose the songs, we also performed a Joy Division track at that festival. And just a few months later there was a new opportunity at BimFest! It was great fun to do it together at Dirk's more or less home ground.


Can you illustrate the somehow unusual title of your new album, ‘I Sew A Blanket Of All The Broken Clouds’?

Jonas: Well no. But it´s a homage to one of our biggest musical influences. A Swedish legend.
Johanna: The one who finds out… finds out. But one clue, he´s doesn’t make any electronic music.


While your previous album on Daft Records ‘Guilt Collection’ reminded me more of the industrial Cabaret Voltaire and The Klinik sound, this one revokes (to me) more the old Skinny Puppy atmosphere. Is this a conscious choice, due to new instruments (details please) … or is it just in my mind? :P

Jonas: That is a interesting question. We did a show in Stockholm a month ago where we tried out some of the new tracks and actually a few people noticed the same thing. But it has not been a conscious choice. For sure. Skinny Puppy has meant a lot to us but it was not at all in our minds when we recorded the tracks. But still it feels nice to be compared with Skinny puppy.
Johanna: Maybe we shouldn’t have sold our Polivoks synthesizer? That one synthesizer was pretty much part of every single track before.
Jonas: Yeah maybe it´s because of that. And now when this new record is out it´s time to get new synths so let´s see how the next one turns out. More like Coil maybe...


In opposite to most electronic acts you chose to have more than two people on stage. While in fact, correct me if I’m wrong, Alvar’s music is just composed by the two of you. So why this choice?

Johanna: Well as said before, Jimmy and Fredrik are now full on members of Alvar. But despite that it´s still the two of us who compose the tracks. But they both add parts to the finished recordings.
Jonas: We have neither the time nor the energy to be more people involved in the song-writing process. But playing live is a different matter.
Johanna: Both of them have added so much energy to our performances. And when we are four the travelling part becomes a funnier and easier thing. And since both are close friends it feels very nice to have them in the band.
Jonas: It feels better to be four on stage as well, we become this intense machine when we are together.


What is your general producing method? I mean do you make all tracks as a band/duo or do you both sometimes compose tracks independently?

Jonas: Mostly I make the first parts of the tracks. Like a drum pattern or just a simple noise sample. Then Johanna screams.
Johanna: That's so bad!
Jonas: Hahah yes. And then we try to make the rest of it together. Lots of wine and late nights. And once ready Jimmy and Fredrik get the tracks. But in the end it´s when we play live that the last parts of tracks take shape. We always seem to re-arrange the tracks before every single gig...

What is, according to you, the most shocking event or trend of 2018?

Johanna: That rascism still exists and the fact women are still being oppressed is shocking.
Jonas: Flying is always the most shocking event for me. Everytime... Always... I simply hate it. But I think I only had to fly twice in 2018. The trend of 2018 has been 303´s - we sold ours.. or maybe those awful winged jeans!


If you had the power to change one thing on this planet, what would that be and why?

Both: It feels stupid not to answer peace on earth!

Do you have any (wise) message to our readers?

Jonas: Simply hope to meet you all soon! And thanks for the nice interview!

STIN SCATZOR • I never could have thought Stin Scatzor would ever release an album on DAFT Records!
MANINKARI • ‘Sound Has Also A Place In A Process Of Spiritual Healing’
IRKLIS • ‘INDUSTRIAL MUSIC WAS NEVER MADE TO PLEASE ANYBODY’
PSY'AVIAH • 'For me, music was important, because I can lose myself in it and find comfort in it.'
LACRIMOSA • When I made ‘Testimonium’ I was kind of in trance.
SOFT RIOT • Jack Duckworth talks about Soft Riot
TREPONEM PAL • ‘SOBRIETY, POWER AND ORIGINALITY’
ELEKTROSTAUB • 'I think it will be almost impossible to combine all the artists into one single concept.'
DIE FORM • I would like to be optimistic and positive, but the world seems to move inexorably/blindly towards a sombre future, towards chaos.
KIM LARSEN (: OF THE WAND AND THE MOON:) • Symbols still carry personal meaning to me.