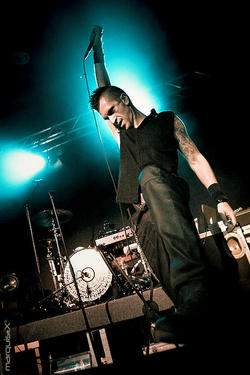 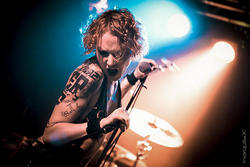 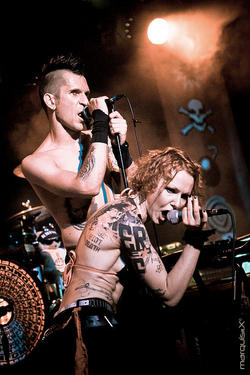 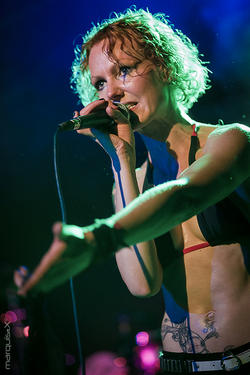 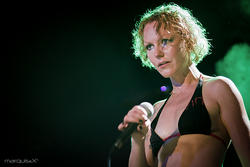 We love what we do and if we return 10 years back, we wouldn't like to change any moment.

We had a great chat with Ambassador 21, as we don’t want to write too many words. We used A for Alexey Protasov and N for Natasha A Twentyone.

Not everyone knows Ambassador21, so introduce them!
A - Hello everyone, we are AMBASSADOR21, we playing industrial hardcore music, wrote many songs and played lots of gigs.

N - All the things we say are about freedom.

A - We don't paint our necks in black.

You recently celebrated your 10th anniversary. Pick up the high and low….
A - Well yeah, we do ;) If there someone really count with us - we start to play live on stage in 2003, so recently we celebrate 10 years on stage. As every active band - and A21 is a real band - we had lots of things happened during last 10 years. Met lots of people, visited many places, had a good and bad experience. But let's forget about bad things - everyone get it, it called "life". We love what we do and if we return 10 years back, we wouldn't like to change any moment.

If I think of Ambassador21, the first thing which comes to mind is that you’re definitely a DIY-band. Right?
A - Yes, right. Whatever it means ;) About DIY there are billions of articles, interviews and stupid blogs written by clever people and complete idiots, as well. Yes, AMBASSADOR21 is a DIY band, but we are always open to work with nice people and professionals.

And then of course there’s the noise. You won’t be offended if I tell you that Ambassador21 is one of the loudest bands ever. Why? Simply cos you love it or use it as a revolutionary tool?
A - We love hard and aggressive music. We just fucking love it. As industrial from the beginning was hard and aggressive and the funs didn't call it "offended" or "stupid". What fucking happened that people started to use only words "clean", "beautiful", "intelligent", "quiet" to describe industrial music? AMBASSADOR21 doesn't play "beautiful" music. But from other side don't separate music on "noise" and "not noise", it's absolutely stupid. Or it has an attitude, or it hasn't and there is nothing can save it.

N - We like to play and listen hard and energetic music. That's why we really recommend to journalists and reviewers who want to listen something "beautiful" DO NOT listen our music.

I love anarchy, but the left dream seems further away then ever as it’s all about the money these days?
N - Not agree. Sure, we all need money to live. But we don't need a lot of money. We just need money to live - to pay our flats, to eat, to buy some instruments and stuff to make music (i don't mean marijuana). But actually we don't need more. So, about money it's easy.

A - About the left dream - when left people will finally stop to compare who is more true "anarchist" and who is less, who are the real revolutionaries and who are not - all will be ok.

N - For us the message which you put into your music is fucking important. It's not only about to changing the World, but you must to put at least SOME fucking message. Freedom, independence, love if you want, yeah!

A - The sounds you create only because you curious about how some software works (and it's really sounds funny, hey, wow, look on that!), and only because you have free evening few times in the year can change NOTHING, even YOUR life.

Back to music… You’re on HANDS now…somewhere that’s the perfect label for you I think.
A - Yes, and we are very glad to join Hands, indeed. We respect a lot their activity and what they did for industrial music in general since years.

How did you got in touch with them?
N - We know each other many years :) I guess, first time we met Udo in 2005. We always was in very friendly relations, spoke lots of times about music and… hmmm, how it can change the world ;) We all like hard sound, we all have strong message and attitude. Now we've got a decision to work together.

Ambassador21 are in the first place a liveband, but still I think you succeed in putting that harsh livesound onto cd?
A - It's great if you think so. Studio sessions are very important for us and it's very big part of our activity.

Another tricky question. What do revolutionaires like you think about illegal downloads and so?
A - Well, what's the problem with it? We respect people who still buying music very much - CDs or digital, really big respect and thanks. Small labels or the independent bands like us survive only due to this fans, it's very important for us. But what can we do against people from Belarus, for example, who just can't even do PayPal transfer? It's simply doesn't work there. In fact, the pirates doing very important job to spread the music in the places where the small labels simply can not to promote their artists. Why small label in the middle of Europe, which actually release 500 CD editions should really be scared about people in the north of Russia download the music and listening their artists? This label doesn't do any distribution there, so why to be really angry about that?

N - To pay for music or not to pay - it's a decision only depends on your state of mind. Any laws and punishment against piracy can't force people to pay for music. But this topic deserves to be a theme of whole magazine issue. So fuck it, it's existing.

A - Unfortunately, it's still not answer the question - how the bands can survive today. The gigs are not answer, too, because mostly promoters want to get the bands for free, or, if not, it should be VNV Nation.

I guess Ambassador21 has become a real identity for you, not?
A - Of course. It's became a brand, man. Who said "Fuck All Systems!"? Check fucking Google ;)

N - If i've got to the island, probably i need at least 20 records to spin one by one and ever. But not one, exactly.

With whom wouldn’t you mind to be alone with in an elevator for 8 hours and what would you do then?
A - With Natasha.

Hmmmm, what do you think from Peek-A-Boo magazine?
A - Listen good music.

N - And don't be afraid to change the World.

CEDIGEST AND RUINIZER • READERS; If you buy my new album, I'll send you a sweet picture of my corn hole and you'll wanna take it to your room and put it in your special box. 100% Guaranteed.
ELEMENTS • One band is consistently cited, if people compare: The Sound
SCHALTKREIS WASSERMANN • We had very little money at that time. I had been playing guitar a long time before Schaltkreis and owned some effects. The first thing that Stella and I bought together was the Roland Space Echo RE-201 that I still have
PHOSPHOR • Our name reflects the kind of darkness that we make, but also the light that we bring to people's lives...
XIU • I'm still shy and introvert but I try to be more open during performances, and actually it comes naturally with more practice
CYFERDYNE • if Neuroticfish asked us to put something together, we definitely wouldn’t say no. We’re such huge fans!!!
LISA MORGENSTERN • I also sing about nicer topics when they overwhelm me, but mostly they don't.
CHAINREACTOR • There is hardly another project besides Chainreactor which fulfills the fusion of hard techno with elements of dark electro and presents the most explosive mixture!
AUTOMELODI • The definition of “coldness” in music is a very debatable one...
THE KVB • We love Belgium, its culture and especially the beer! It's the best in the whole world!