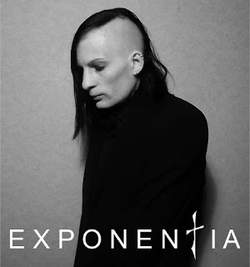 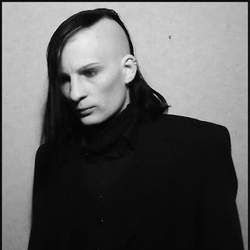 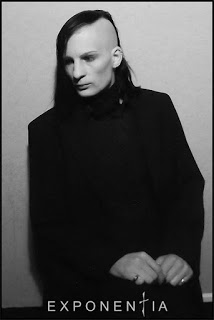 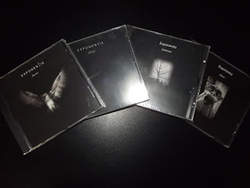 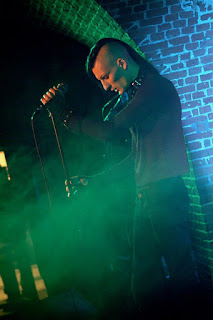 I want my voice and the related effects to simulate an unreal creature.

Exponentia is a bit of a special act. It is a neoclassical project of one man: Ludovic Dhenry. He just released ‘Abend’, his fourth album, but he has also released excellent CDs under the names Zauber and Résonance Magnétique. Wondering what drives this man? We are too.

Hi, Ludovic. You just released ‘Abend’, the fourth CD of Exponentia. I suppose there is a concept behind the disc. If so, can you explain the concept?
I worked differently for this record. It was not like Sadness, for which I wrote songs that had to expres a feeling of sadness, or Ghost, where entities were the subject of the record. On Abend I wanted to integrate a new instrument for Exponentia - the electric guitar - and work on more conventional song structures.

Indeed, there’s a clear emphasis on guitars, an element that was absent on previous records. Is that the influence of Lacrimosa? We know you're a big fan.
Before I started composing, I started the creative process with listening to all my previous records. I then thought about the musical colour of the future disc. From that moment on, I imagined a song mentally, as an indication for the direction the disc would take. The addition of electric guitars has been forced into my mind. I made a first test in the studio in that regard. That resulted in the song Abend, which is also the title of the album.
There are a lot of bands in rock, metal, electro, industrial... However, there are only a few in the style of Lacrimosa, Das Ich, Goethes Erben, Sopor Aeternus and others. When I founded Exponentia, I wanted to enroll myself in this style, simply because it's the music I like to listen to and to write. I have this music inside of me. I listen to it often, as well as to baroque and classical. That influences my work. I often listen to Lacrimosa. This influence has played a major role in my choice to add guitars.

As always, the compositions contain very detailed arrangements with many instruments. Did you follow special harmony classes to work like this?
I've been to a professional music school every day for a year. It is an intense, complex and engaging training. I have studied music theory and harmony, as well as sound technique for mixing and mastering in the studio. I never followed harmony lesson for writing symphonic orchestrations. After I graduated, I learned a lot as an autodidact. To write the arrangements about which you talk, you need a thorough knowledge of music theory, as well as many hours of personal work. If you write a symphonic song, you need to have clear ideas, to know what you are doing and why you do it. If I write a melody for violins for example, and decide that the chords will be played by the second violins, violas, cellos and double basses, I must also decide which instrument will play the third, the fifth and the root tone, so I do not lose myself in the chord progression, especially not if the scale changes, when I borrow notes from related scale or when random scale changes occur, in which a mi mole is changed for only a few mesures. In the same way, I define what the brass and woodwinds will play. Music is my life, I spent a lot of time on it.

All instruments are actually played by synths and keys. Have you ever tried to surround yourself with real musicians?
By working with keys, the project gets a more synthetic, electronic sound, which I love. It would be a great pleasure to have my songs played by a symphony orchestra, but the budget to record with such orchestras in the studio is too big for Exponentia. However, it is conceivable that I would work with real musicians in the future, for example guitarists.

On your album, we hear that you attach great importance to the voice and the articulation. Your voice on Abend reminds me of Sopor Aeternus, another project that has certainly influenced you. What did you strive for with your voice on Abend?
I want my voice and the related effects to simulate an unreal creature. That's very important in my artistic project. A strange voice, inhumane... I had set a target for this record to improve my voice and the effects in that respect, to rise a step higher in comparison with the predecessors. And effectively, Sopor Aeternus has influenced me in that respect.

As on the debut of Exponentia - Allein - you use German on Abend. Why?
The language is very important. It creates an atmosphere, it changes the character and individuality of a song. A similar song in English, Spanish or German is completely different, it takes on a different shape. In this sense, the German language best matches my expectations, and musically, I love that language the most.

Since our last interview, you have released several excellent records. There was Engel by Zauber, a project that mixes the symphonic aspect of Exponentia with more electronic darkwave sounds. Then you have made an instrumental industrial CD with Résonance Magnétique. Whence the need to have multiple projects simultaneously?
I wanted to express myself in different musical styles, and realize musical ideas which have been living in my head for a long time. The name ‘Résonance Magnétique’ exists in my mind for as long as I compose. I wanted to create something tormented, danceable and sometimes dark and ambient, with sound manipulations, such as on the songs Illusion or Arcane. It’s the same for Engel by Zauber. I was very pleased with the result when I finished the recordings, especially with the track Ewigkeit. I just wanted to make an album like that. I was internally driven in order to make these discs, this music. These musical projects have similar points. They are part of my work. Now, I have decided to focus solely on Exponentia.

Will we be able to see live once more, or are live appearances a part of the past now?
No, concerts are planned at this moment, but everything remains possible.

And now? What are your plans for the future?
After I had finished Abend, I made a remix for the new EP by Sara Noxx and Marck Benecke. And I have now started writing my next album.

We wish you good luck.

COMBICHRIST • People seem to forget where this scene came from in the early 90's. This is not me walking away from the scene, this is me evolving to keep it alive, and not let it drown in its own repetitive boring vomit.
DIOXIDE • I have always been interested in the process, often more than the result, when it comes to electronic music.
SKEPTICAL MINDS • It’s like a voice telling you: “hey guyz... you started, now you have to continue...”
SADMAN • We love the idea of people listening to our music and standing for hours in front of a great painting.
FEW BITS • We really have only one rule in the group: love and fun.
NEW DARK AGE (PETER SLABBYNCK) • Oh, just listen to the records and let Adrian rest in peace.
ROBIN PROPER-SHEPPARD (SOPHIA) • This new album just has a sort of color that gives it a more happy feel.
JOHAN TROCH • For me making music is a momentum and a gig is just recycling your own work for an audience. That’s out of my comfort zone.
CHRIS DUPONT (MRDTC, NORDARR, KLEQQ, THE NEGATIVITY BIAS) • Don’t believe in everything you read on the internet or in the newspaper or what you see on TV. Ask, be skeptical and get informed.
OST+FRONT • I’m never satisfied with anything. It's like a sickness...

Other reviews from EXPONENTIA
EXPONENTIA • I wanted to create an unreal atmosphere, something spooky, coming from the most indefinable obscurity.