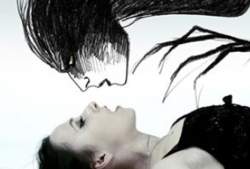 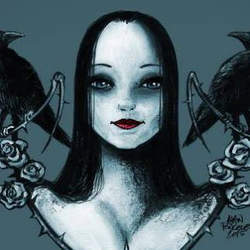 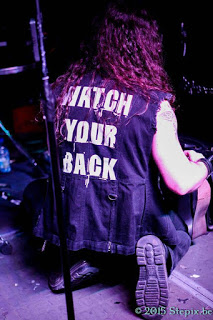 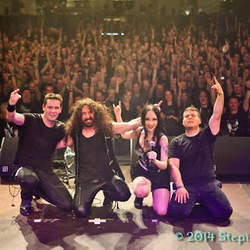 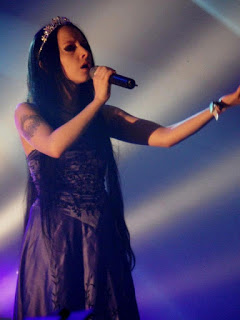 It’s like a voice telling you: “hey guyz... you started, now you have to continue...”

Skeptical Minds has surprised us with the latest release. It is a combination of a CD and a comic strip called ‘Omega Thanatos’. Both the strip and the CD tell the same story, and the result is impressive. We discussed how it all came about with guitarist Mich and singer Karolina.

With ‘Omega-Thanatos’, you succeeded in making a piece of art that combines a beautiful CD with a comic book. Where did that idea come from?
Mich : In fact, when we were busy with the second album, in 2008, we had also some ideas about a concept album we would like to release in the future with a comic book. Something different than what we did before. We always try to bring something new. We wrote a small story. The story contained 11 chapters and the CD would also contain 11 tracks. That was the starting point.

That’s a long time ago. How did you proceed?
Mich : We built the structure of the future Omega Thanatos project in 2008. But at that time, we had no idea how we would achieve that in the future. We left that for later... In 2010, we released the album ‘Skepticalized’. In 2011, we made our first steps with Alain Poncelet. We made a first try with a comic book about the song Broken Dolls. Alain became responsible for the whole Skeptical Minds artwork. That is how we started to make Skeptical Minds and Alain Poncelet’s dark art to be inseparable. After we saw the result and people’s reactions about the new T-shirt designs and about the Broken Dolls comic book, we decided to start with the Omega Thanatos Project. We started in 2013 and we released it in October 2015. Two long years of work, but it was a real pleasure both for the band and for Alain. We learned a lot and after that “one shot” project, we decided to continue because when we achieved it, many ideas started to come in our heads... It is like something telling you: “hey guyz... you started, now you have to continue...” And that is what we will do.

Many songs have elaborated parts with piano and strings, and the guitars sometimes have to keep quite during longer parts. Does that make them more difficult to play live?
Mich : Not at all. Those piano and electro elements are sampled. It is not more difficult than before. It is true that some times some instruments are more quiet. We tried it and it worked. It gives most of the space to Karolina. People can hear clearly what dimension she gives to her voice! People appreciate to hear the voice “alone” without heavy instruments around like usual. That is a comment that came back… Then, having a piano on a playback or not, I think they do not not care. We do not anyway… (laughs).

I presume Karolina came up with the story line, or was it an idea that was discussed with the other band members?
Mich: The story line was written mostly by Gab, our previous drummer. Then we discussed it together with the band. We had the structure in 11 steps. When we really developed the Omega Thanatos project, Karolina wrote all the lyrics of the songs. She knew the 11 steps and what each song was about. Then she developed it with her own words. As she has to deliver the songs and play the character, it was important that she wrote what she felt. You can feel in the interpretation if it comes from her or not.

Karolina, you only joined Skeptical Minds in 2008. It is surprising how well you fit with the band. You have also taken a leading role in the creation process, even if I don’t underestimate the input of the other members. Wasn’t it hard for you as a newcomer?
Karolina : In fact, when we met with Skeptical Minds in 2008, we spent a day all together in Amsterdam. The band was there and our common friend introduced me to the band. His name is Stephane Odent and I want to thank him. Without him, nothing of this would have happened. We spent a day together and we all felt like we knew each other since years… We all were connected and felt like we formed a real team. The rest followed naturally… The contact with the band is fantastic. They were very understanding and helpful in the beginning. I could find my marks easily. When they felt I found my place, they started to give me more responsibilities. In Skeptical Minds, everyone as his part of the job and everything is discussed together. I also received my part of the job. I felt they trusted me and they were happy with what I provided. Since that moment, you fit better and better, also because you can bring things that suit you. If you feel comfortable with what you create, then it’s easy to express yourself better and better. It was hard in the beginning. The band provided me all what I needed, but they also were very demanding and I had to work hard. Without work, I wouldn’t have stayed for long in the band (laughs). They all work hard and continuously for the band. I really like that because it makes you feel super motivated even after many years. The flame is still there, like in the beginning.

I have read that you also plan to tour with Alain Poncelet. How do you think you can make him a part of your live act? Is he so devoted to Skeptical Minds that he’s ready to follow you everywhere?
Karolina : Alain is the fifth member of Skeptical Minds. If you see the promo pictures, he’s there. It’s not only the picture. It’s a team and Alain is a part of the team. When he decided to start the project, he also decided to be involved 100%. When we play, he often comes to dedicate some comic books. About the shows, we try to develop the concept on stage to make Alain’s universe co-exist in Skeptical Minds’ shows. The visual touch of Alain will be more and more present. Our last video clip ‘Emptiness’ is a good example of what we try to develop. It’s a good example of the co-existence of both universes. In the live shows, Alain can be present through video projections or also by drawing live. We did the experience once in January. 6 comic designers were drawing about Omega Thanatos while we were performing on stage. It was great moment for everybody. We are keeping busy with developing ideas… it can be visual but also more theatrical. I don’t say more for the moment. Let’s see what surprises the future will bring (laughs).

The clip for ‘Emptiness’ is amazing. How much work was it to make this mix of real shots with animation figures?
Mich : It took two months in total since the moment we shot the musicians and the end of the production. The shooting sessions were ready in two evenings. Then came post-production… Alain and the very talented video producer Patrice Gautot worked together for about two months to achieve that clip, to see what drawings they would need and how to make them move… Alain prepared the drawings and Patrice added his magical touch to give them life. The result is far beyond what we expected! What a chance we had to collaborate with such master. Don’t be surprised if we continue to work with the same team (laughs). Everything fitted very well with the Omega Thanatos spirit we wanted to create. They all went into it very naturally.

Last question: why should I watch my back?
Mich : Very good question… (laughs). Many side effects are possible if you don’t watch it. Better not to know. Continue to Watch Your Back!!! (laughs)...

SADMAN • We love the idea of people listening to our music and standing for hours in front of a great painting.
FEW BITS • We really have only one rule in the group: love and fun.
NEW DARK AGE (PETER SLABBYNCK) • Oh, just listen to the records and let Adrian rest in peace.
ROBIN PROPER-SHEPPARD (SOPHIA) • This new album just has a sort of color that gives it a more happy feel.
JOHAN TROCH • For me making music is a momentum and a gig is just recycling your own work for an audience. That’s out of my comfort zone.
CHRIS DUPONT (MRDTC, NORDARR, KLEQQ, THE NEGATIVITY BIAS) • Don’t believe in everything you read on the internet or in the newspaper or what you see on TV. Ask, be skeptical and get informed.
OST+FRONT • I’m never satisfied with anything. It's like a sickness...
FACTICE FACTORY • The final outcome of our sound is in fact the global influences and tastes each one of us have.
WENDY JAMES • I don’t really adhere to the aging process!
MAX LILJA • The classical world is still full of puritans that will never see any value in what I or other like minded people do.