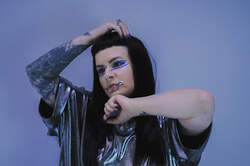 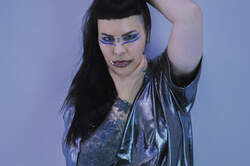 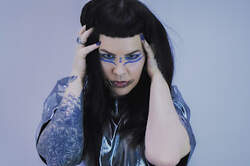 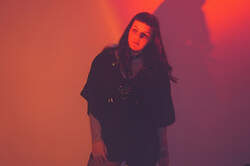 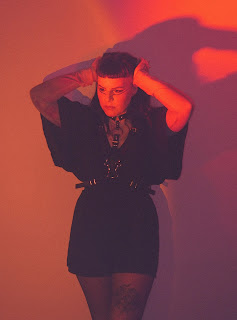 I broke away from the pressure you have as an artist to appeal to a certain type of audience, to create dance floor hits.

Minimal wave, or synth wave if you prefer, is doing well. Think of Zanias, Selofan, Kaelan Mikla, Lebanon Hanover, NNHMN... And let's not forget the two projects by Hélène De Thoury, both of which are among the best in this genre: the duo Minuit Machine and her solo project Hante. The first group has released two EPs during the lockdown, the solo project has just released a new record: ‘Morning Tsunami’. Hélène will also present that record live on October 2 in De Klinker in Aarschot, thanks to the organization Into The Dark. Reason enough to have a conversation with De Thoury.

Hi Hélène. We are very impressed with your new Hante record: ‘Morning Tsunami’. You described this record as your ‘most accomplished and inspired work to date’. In what sense is this work an evolution from your previous records?

Hallo! First of all thank you very much! Something happened that I can't explain when I was composing ‘Morning Tsunami’. It was as if I was really one with the music, that it was an extension of me. I had never felt this way before. I think that with everything that has happened in the past year, some deeply hidden emotions have surfaced and triggered new feelings that I had to get out. There was also the desire not to make any concessions in terms of style, production, visuals. I broke away from the pressure you have as an artist to appeal to a certain type of audience, to create dance floor hits. I've also moved away from the classic stanza/chorus construction. Most songs are built up progressively and sometimes it takes a long time before they get going. I knew it could be a risk, that people would be less moved or would not find themselves in the songs. I tested new ways of working, using new plugins, new virtual synths. I renewed my range of sounds. In the end I was rewarded for taking this risk as the reception was extraordinary!


Can you tell us more about the title 'Morning Tsunami'?

I was looking for a very personal title to accompany the album. I quickly thought of ‘Tsunami’ because it is a word that I find both very beautiful and which frightens me. It's a recurring nightmare I have. I am on a beach or in a city and a huge wave is coming in the distance. And there is no way to escape it. I've associated the word ‘morning’ with it because I often have these kind of nightmares when I return to sleep in the morning. It is a very special moment, between two worlds. This was already a very important theme on my album ‘Between Hope & Danger’: the search for those moments when it is possible to escape reality, which unfortunately always comes back to us.


All lyrics on ‘Morning Tsunami’ are yours. Don’t you feel the need to approach other people to write lyrics anymore, like you did on 'FIERCE' or with your other band Minuit Machine?

I would rather say the opposite, that sometimes I find it necessary to be able to write my own story, to express the emotions in words myself. And that's one of the reasons I created Hante. When I started composing ‘FIERCE’, it had been 2 years since Amandine and I stopped playing in Minuit Machine. I wanted to rediscover the creative inertia you have when you compose a song with several people. That's why I invited several artists to write and sing lyrics on the album. But now that we've restarted Minuit Machine, I'm happy to find this hidden, private garden of Hante and to be able to fully express myself through this project.


I really like the way you sing in both French and English. Was it something that came naturally or was it a preconceived idea? How do you determine whether a text will be in French or in English?

Strangely enough, the lyrics come to me more easily in English. I have the impression that you can convey a very strong idea with just a few words in English. While that's more complicated in French, I think. But it remains my native language and I feel the need to include it in my musical project because I want it to match me 100%. Sometimes, when I have a first impression of a text in French, I seize the opportunity and explore it to the end.


The album ‘Morning Tsunami’ was made in COVID times. Has the lockdown affected your work?

Of course! As I said, this period has stirred up a lot of emotions and that has inspired me enormously. The lockdown, the sense of helplessness, the sadness and fear that the world was plunged into… But it wasn't all negative, I have questioned myself thoroughly, like many people, and there is inevitably a before and an after in our personal developments. I also took a lot of time to be inspired, to listen to a lot of music and to discover projects that greatly influenced me in the making of the record, such as the album ‘Unreleased Tracks’ by Kas:st.

I would say there are two reasons for this. First of all, from a financial point of view, we just had to carry on. There was no question of letting the projects bleed to death. But besides that, I realized very quickly that people – contrary to what many artists thought – wanted to listen to new music and that they were willing to support artists even more than usual. It's obviously not that easy to promote an EP or an album without combining it with a tour. But whether it was for Minuit Machine or for Hante: we felt real enthusiasm with every release and that convinced us!

Minuit Machine, in which you are accompanied by singer Amandine Stioui, has also become a cult group. Isn't it a bit schizophrenic to be active in two groups at the same time?

It's a little complicated sometimes, yes. But it is more a matter of organization. A calendar organization, of course, but also in your head, so as not to get everything mixed up and, above all, not to be influenced too much by one or the other project. I think I have managed to distinguish the two worlds. And also to accept that they can take different paths. It's not always easy, but I'm working on it!


You also have your own label Synth Religion, which releases records by Hante and Minuit Machine, as well as other artists such as Fragrance, Marble Slave, The Colder Sea and Box and the Twin. I see that you actively participate in the records of these bands, you do the production or mastering, or you participate in the compositions. How do you select the groups you work with and what determines your level of involvement?

Most of the artists I've released on the label are friends or people I've met along the way and with whom I get along on a personal, even more than a professional level. The only exception is The Colder Sea, who emailed me and I fell in love with their music! Unfortunately, we never met. The problem I have now is that I don't have much time left to work for other artists. And the more my projects grow, the less I can invest in the label. So now, production-wise, I'm focusing on my two personal projects.


With all these activities, I believe you have to make a living from your music. Can you manage that? Also and especially in the difficult months we just went through?

I can get by, yes, but with difficulty I must say. I am extremely lucky to have a community of enthusiasts who support me and who continued to buy merchandising when the concerts were all cancelled. As a result, I could continue to work, I even had to continue to produce. I hope it gets better with the return of the concerts! Because it's a vicious circle that you need: the more concerts you play, the more people notice you, the more people listen to you, the more merch you sell, the more you can play etc.

Hante will play on October 2 in De Klinker in Aarschot, Belgium

THE ULTIMATE DREAMERS • Dimitri from Wool-E Discs had learned that I was part of a band in the 80s and asked me to listen.
UNITCODE:MACHINE • An Interview With unitcode:machine
CYBORG AMOK • An Interview With Post-Punk / Gothic Duo, CYBORG AMOK
ERASURE • 'I'm preparing tracks for our up and coming tour' - An exclusive Interview with Vince Clarke
BLACK ANGEL • Interview With BLACK ANGEL
THE IMAGINARY SUITCASE • For most of my life, I have behaved the way I thought they wanted me to behave. And this is a scam.
BODY DIVIDE • I’m a masochist. I think a lot of people fear it...
TERMINAL SERIOUS • I ask myself time after time: can love still save us?
THE LOST INTERVIEW WITH KELLEY DEAL ( THE BREEDERS ) • Peek-a-Boo publishes the interview with Kelley Deal that seemed to get lost for a long period of time - since it was made in 2018...
BLEEDING RAVEN • Never really took myself serious... still don’t...

Other reviews from HANTE
HANTE • Music is a companion. You can choose the soundtrack of your life! It can change your emotions or comfort you like a friend.