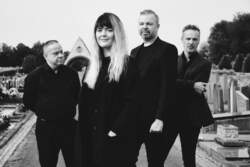 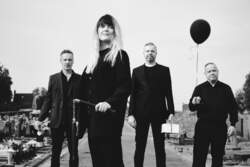 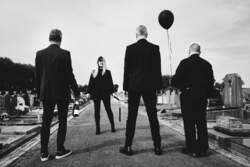 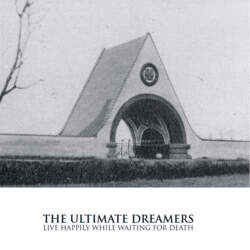 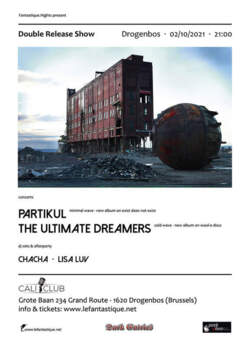 Dimitri from Wool-E Discs had learned that I was part of a band in the 80s and asked me to listen.

The 80s haven't released all their secrets yet. Take The Ultimate Dreamers. They played on the stages of Lessines and surroundings from 1986 to 1990, but they never released a record. Until now. After a dive into his archives, singer Frédéric Cotton - also known for the Fantastique.Nights concerts and the Club New Wave parties in Brussels - found enough songs to release a record, and it is published by Wool-E Discs and Dans Les Profondeurs. In addition, the group is being reformed and will play several concerts in the coming months, starting with the release concert at the CaliClub in Drogenbos on October 2nd.


Hi Frédéric. The Ultimate Dreamers come from Lessines, the city of surrealists René Magritte and Louis Scutenaire. Can you describe the atmosphere that reigned in Lessines in the mid-1980s, and in particular the access you had to music and especially new wave?

Hi Xavier! Lessines was a small provincial town where there wasn't much going on. Musically, it was pretty deserted, and we were just a small group of friends interested in underground music. There was only one record store and although the owner did what he could, we preferred to go to Brussels or Ghent to buy records or see concerts. Inevitably, dressed in black and with a weird look, we were seen as unapproachable by some small local minds. A classic story, I guess.


It is in this context that The Ultimate Dreamers was born. How did the group come together?

We were still in high school when we created the No Position project, with Joël on drums, Laurent on bass and myself on synth and vocals. Two other guys were also playing synths. We only played two concerts and then Joël, Laurent and I, who had darker tastes, left to create The Ultimate Dreamers.


If I understood correctly, the band started out as a more synth-focused trio and then evolved to include more guitars. Can you give us more details on this evolution?

Indeed. At the beginning, we used a rhythm machine, synths but also a very present bass. It was a formula that offered a lot of possibilities. Then Laurent, who was a multi-instrumentalist, took over the drums and we entrusted the bass to a newcomer: Bertrand. A little later, I started playing guitar, which made us evolve towards a harder sound, a little more rock.


I heard that you have organized your own underground festival in Lessines. How did it fare?

That's right. As nothing was happening in Lessines, we decided to organize our little festival ourselves. We obviously made the mistakes of beginners and had the foreseeable problems with SABAM (with m as mafia), the police, the municipality, etc. There have been 3 editions of this Summer End Festival, with bands such as Designed To Die, Heaven’s Above, Courtisan Holy or Nijinsky, if I remember correctly. A few people still approach me about it sometimes.


The Ultimate Dreamers ended in 1990. What led to the end of the band?

Like many other bands, we didn't split up. We should rather speak of a long pause than of an end. Laurent first left us to devote himself to other projects he was leading in parallel, notably with a noisy pop group (it was the beginning of the 90's) called Mosaic Eyes, which had some success. In the process, Bertrand decided to quit for family reasons. After testing a few substitutes without success, I got a little discouraged and focused on my studies. Joël continued with many very varied projects: bands, a label and even a wrestling career!


Now you are releasing a compilation of The Ultimate Dreamers: ‘Live Happily While Waiting For Death’. If I understand correctly, you took the time during the lockdown to browse your archives for the last remnants of the group. Is it correct?

It's almost that. In 1990, I made a little “best of” cassette that had been lying around among my CD's, near my Hi-Fi system. A few years ago, Dimitri (from Wool-E Discs) had learned that I was part of a band and asked me to listen, but I did not follow it up. During the corona crisis, so much happened that I finally decided to digitize the tape. I posted a few snippets on facebook, with amused and interested reactions as a result, and sent them to Dimitri. He quickly suggested that I should release an album, much to my surprise. I then searched to find the original recordings...


How many songs did you find during your research and how did you select which songs were suitable for release on the disc?

I found 25 tapes that I quickly digitized and listened to. It was like a trip down memory lane. I didn't count the number of songs but there must have been between 50 and 100. I did a first sorting and then Dimitri and I made a finer selection with the intervention of Bertrand and Joël. Finally, we had the cassettes digitized in a studio, then restored and mastered the selected pieces.


In addition, you resuscitated the group. Two of the former band members join you with a newcomer to promote the record live. How did you manage to bring these people together?

Bertrand and I still saw each other regularly and I still had contact with Joël and Laurent. Initially, we discussed the record. Then the idea for a release concert came up. Finally, we quickly found the pleasure of playing together. After a few weeks, I contacted Sarah, whose keyboards I had really enjoyed in the Brussels post-punk band The Panties. She agreed to participate. We rehearsed together and the chemistry was there. The Ultimate Dreamers were back.


The sound of the record is very 80's. Did you update some songs to give them a more modern sound live?

Our current repertoire is made up of our old compositions. Some are present on the record, others not, because the sound was not good enough. By recreating these pieces, they naturally evolved with a more modern sound, without it being a real purpose. But it’s the reality and it’s pretty good.

Today, you are mostly known as the organizer of Fantastique.Nights concerts and Club New Wave parties. Was it a natural evolution to go from musician to concert organizer?

May be. Like I said before, I started organising concerts early on. I continued when I was a student in Mons and then in Brussels. After a few calmer years, I resumed around 2000 when I joined the team of the fanzine Khimaira and the webzine LeFantastique.net (hence the name Fantastique.Nights) as a columnist and then as music manager. Concerts have always fascinated me. The parties mainly have a financial interest, which makes it possible to continue to organize concerts.


During the pandemic, you also became a public figure as a professor and director of the ULB's medical chemistry laboratory. How did you experience this?

We have all lived through an incredible period that has rocked the entire planet in many ways. As a health professional in academia, it has been very stressful at times but also very intense. At one point, faced with the repeated mistakes of certain ministers, I felt the need to react. I wrote an opinion piece in the newspaper Le Soir which made a lot of noise, especially on the French-speaking side, and I found myself projected onto the media scene. This is a situation that brings a lot of problems, ultimately. It’s not just Van Ranst who has attracted dangerous lunatics. Finding The Ultimate Dreamers allowed me to escape the stupidity of conspirators of all kinds (unfortunately quite numerous in the dark scene).


If we combine your experience as an organizer and your medical expertise, you must have an opinion on the resumption of concerts and nightlife while the virus is still active. Tell us about it!

As an organizer, I was very careful because the successive waves were predictable. Cancellations are demotivating and costly. Now, I am more confident because the general population has good protection thanks to the vaccination. But the crisis is not over. Too many people still refuse useful measures with often stupid arguments. We may still see small waves but nothing comparable to what we experienced in 2020. Temporarily, the Covid Safe Ticket or the COVID Certificate can still be very useful.

UNITCODE:MACHINE • An Interview With unitcode:machine
CYBORG AMOK • An Interview With Post-Punk / Gothic Duo, CYBORG AMOK
ERASURE • 'I'm preparing tracks for our up and coming tour' - An exclusive Interview with Vince Clarke
BLACK ANGEL • Interview With BLACK ANGEL
THE IMAGINARY SUITCASE • For most of my life, I have behaved the way I thought they wanted me to behave. And this is a scam.
BODY DIVIDE • I’m a masochist. I think a lot of people fear it...
TERMINAL SERIOUS • I ask myself time after time: can love still save us?
THE LOST INTERVIEW WITH KELLEY DEAL ( THE BREEDERS ) • Peek-a-Boo publishes the interview with Kelley Deal that seemed to get lost for a long period of time - since it was made in 2018...
BLEEDING RAVEN • Never really took myself serious... still don’t...
DIVE • We All Can Ask Us The Question ‘Where Do We Go From Here?'