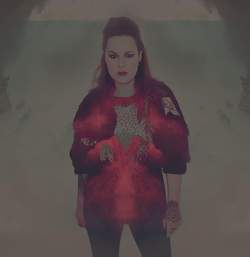 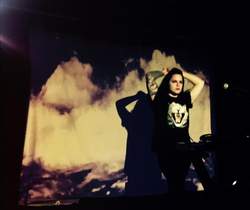 Music is a companion. You can choose the soundtrack of your life! It can change your emotions or comfort you like a friend.

On Friday, September 9th, Hante will play at JH Wommel (near Antwerp). This is of course a superb opportunity to ask this French lady some questions about music... and of course about elevators!

Hello Hélène, you have been involved in both Phosphor and Minuit Machine. And now it seems like you’re completely concentrating on your solo project Hante. Is being a solo artist, the way you wanted to work? Being totally independent?

Hello! Actually, when I started my solo project, I never thought it would end as my main and only project. Of course, it’s easier when you don’t have to compromise, when you can decide on every detail, but playing solo or in a band both have advantages and inconveniences. I like being in a band, sharing experiences, emotions and memories. But unfortunately, both projects stopped and I’ve been really sad about that. I will join a band or start a new project in the coming years if I find the right people!

Anyway, the split of Minuit Machine came a bit as a shock for most fans, as I think (just like so many others) that you did something quite unique in synthpop land with Amandine.

Thanks a lot! It’s a great compliment. I think Amandine’s voice, melodies and lyrics fitted perfectly with the music I composed. But you know how it works, music is not enough and when people decide to take different paths, there’s nothing you can do.

Let’s move to Hante... Where does the name come from, I don’t think it is about the small river that runs through France and Belgium?

I’ve never heard of that river! But it’s good to know! I was looking for one French word starting with h (like Hélène…) and I saw this tag on a wall near my building. It was written as ANT on the wall and it made me think of the word hante in French because we don’t pronounce the h and the e. The meaning is of course totally different, but it was actually quite perfect. Hante means Haunts. You can be haunted by a memory, an idea, which is often the case for me. But it’s more something I would say to myself: Haunt this world, stay forever, there is no other possibility.

Personally, I think your second album This Fog That Never Ends is a genius masterpiece. I guess I played it over 50 times since I bought it... and I must admit... every time I’m touched, it’s hard not to cry. I mean this is a very hard record in terms of emotions?

Wow! Thanks once again! Yes, you’re right. I totally understand what you mean as it’s hard for me to listen to it today. I put my deepest emotions in my music. And when I was composing this album last summer, I was in a weird mood. I felt lonely and in total disharmony with the world. I guess I have a naive vision of everything and I don’t understand why people are so mean, so selfish, so narrow-minded. And it was before the multiplication of the despicable attacks the world has been facing these last few months… When I think of outside I often see a grey and dark world. A Fog That Never Ends.

I also think it’s a very brave record. It’s a record on which you show a lot of inner demons. Take only Hate vs Love. It must take a lot of courage to sing that you hate the world, even if you also sing that you love it...

Isn’t it what everybody feels? How can we love this world that we destroy everyday. Where people kill other people because they don’t like the way they live? And at the same time, you can’t forget the beauty of nature, the people you love or the little gestures of solidarity: all those things that make this world a bit brighter.

You often sing in French, but also in English. Is there a particular reason why you mix both?

What I really like about your music is that you definitely hear that you are influenced by 80's minimal, but you don’t have a real 80s sound... In fact, you are a part of the minimal scene, do you follow it yourself?

Of course, I like to discover new bands or listen to new material of the bands I like in the minimal scene. This mix between 80's influence and a more contemporary sound may come from a contradiction in my taste. Sometimes I listen only to old stuff because I can’t find something that corresponds to my mood in contemporary music and I wish I was born earlier. And sometimes I’m totally in love with new music and wish I could compose some songs as good as those. But I guess a lot of musicians feel the same nowadays. In all arts, we have these cycles, we create some new things with old things.

You are talking about a fog that never ends, I guess the love for music never ends? Can you imagine a life without music?

No, I really cannot! Music is a companion. You can choose the soundtrack of your life! It can change your emotions or comfort you like a friend. And I’m really lucky to be able to compose some melodies that touch some people and even sometimes help them to deal with difficult situations.

Talking about scenes. Recently our magazine interviewed the French act Saigon Blue Rain and it was not very happy with the French alternative dark scene as new bands don’t get changes anymore. Do you agree on that?

Yes, it’s really difficult in France. First of all, the alternative music is really not part of our culture. But like everywhere, it’s a bit trendy to listen to cold wave nowadays. I just read the Saigon Blue Rain interview and I agree, it’s hard for new bands. But I think the problem is different. There is a young audience for the dark scene, but it loves foreign bands (laughs)! We have a problem with French bands in France! It’s not cool to be French. Except for a few bands that (often because of their relationships) are supported by the French press, but I noticed that often they are only touring in France. A lot of people think that I was wrong: playing a lot abroad before even having a little audience in my city/country. But actually, I think it’s the best way to become interesting in France! Because of all your experiences, you’re not only a French artist, you are European and you start to be cool.

You come to Belgium too. In September you play in Antwerp. Tell our readers why they should come, except for the fact that you’re making genius music.

Aha, you make me blush! They should definitely come because first of all, it would be my first gig in Belgium as Hante! Plus, a Waveteef party is obviously awesome. And I will play some new powerful emotional synth wave songs that will be featured on my upcoming EP. I will share some details about this EP in the next weeks, but I can tell you that the vinyl will be available in Antwerp!

These two questions I always ask... What’s your favourite record of all time and please state why...

Ah! It’s a tough one. So many records have been very important to me! You can find some of them in a list I made for Peek-A-Boo a couple of weeks ago. But in this list I would choose OK Computer by Radiohead. I know it’s not really relevant compared to the music I create today, but it was the first time I loved an album that much. And it changed my vision of music, I understood how important it could be, how emotional it could be. And that it would be a real passion to me.

With whom wouldn’t you mind to be alone in an elevator for 8 hours and what would you do then?

OK… this question is even tougher ahah! Hmm… First of all, it’s not really a dream to be in an elevator for 8 hours no matter with whom. But I would say Wes Anderson because I absolutely love his movies and it would be awesome to talk with him about his next projects, his shooting memories, etc.

The last words are yours...

I have to thank you again for your kind words and your support, really! And thanks to all the people who support me everyday! You’re definitely in the love the world part of me (laughs)!

VIRGIN IN VEIL • With those covers, we wanted to make people ask themselves why they are more shocked by seeing tits, cunts or cocks than seeing images of war and messages of hate
RED MECCA • I've got a passion for the things you can't see with your eyes, only with your mind.
DECODED FEEDBACK • We don’t fall into one specific genre within the industrial community…and we love that.
THE JUGGERNAUTS • Funny that apparently only bands as Front 242, NEB and Skinny Puppy tend to created clones? What about the zillion of Beatles/Smiths/Joy Division/etc. sounding bands out there? Oh right, they are ‘just’ inspired!
SHAARGHOT • We're going to offer Germany a great performance in order to thank them for giving us the opportunity to represent our country !
ANDY OPPENHEIMER (OPPENHEIMER ANALYSIS, OPPENHEIMER MK II) • Minimal? I want to fill Wembley Stadium
PSY'AVIAH • Continuing with albums with guest singers was a natural evolution for me
WILD ROSES FOR THE EXIT • I really want the experimental side to take over eventually but I do love the beauty of a classic pop song.
IMMANENT DISTANCE • The story we started on the first album, comes to a climax on the second album.
DAGEIST • Music is a real pleasure to share and it doesn’t have to be a commercial obligation.