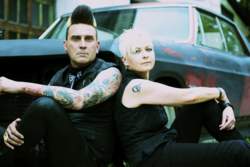 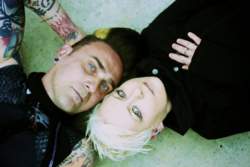 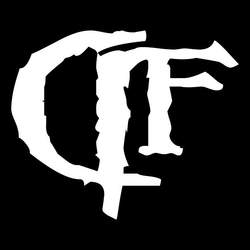 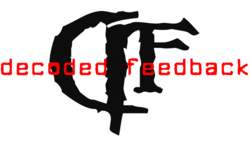 We don’t fall into one specific genre within the industrial community…and we love that.

I remember Decoded Feedback from the time the band members were still living in Italy and releasing their music on the good-old cassette format. The music got inspired by dark EBM revealing great sonic ideas. Later on, Marco Biaggiotti and Yone Dudas moved to Canada, which appeared to be a lucky move as they were getting more recognition. Twenty years after their official debut album (cf. “Overdosing”) they can look back at an impressive discography featuring multiple hits. Their newest album Dark Passenger, released on Infacted Recordings (Europe) and Metropolis (USA), took them 4 years, but it probably is their best and most accomplished work to date. I got in touch with Yone Dudas for a chat about the past and the present.

I noticed that Dark Passenger has been released 20 years after your official debut album Overdosing! What do you keep in mind from all these years and are there things you would have done in a different way?
Yone: Wow, I didn’t even realize it is our 20th anniversary since the release of our first album! How time flies. I don’t think we would have done anything different. Creating music is a very personal journey and every song is part of our journey in life and personal growth. Each album is like a novel, and each track within that album is a chapter. Some albums were very personal and painful.
Mechanical Horizon was the most personal and anguishing album we ever made. Marco and I were breaking up as a couple during production. It was a really painful time. Every feeling (pain, sorrow and hope) went into that album. We worked through our personal issues via music and the result was Mechanical Horizon. It was a very therapeutic process for both of us. No matter how personal the process can be with each song/album, we stay true to ourselves and our beliefs.
During production, we don’t listen to other music. We intensely wrap ourselves inside our own creation. We don’t want to be influenced or sidetracked. We don’t feel the pressure to follow a formula in order to gain more popularity. We don’t fall into one specific genre within the industrial community…and we love that. We are all over the spectrum: dark wave, electro industrial, EBM, harsh EBM, synthpop, etc… We just do whatever we feel like doing without any agenda.

What is Dark Passenger all about and what kind of album did you want to make?
Yone: The name Dark Passenger was inspired by the fictional character Dexter. Dexter felt his Dark Passenger told him what to do. It was the hidden dark part of himself. We feel that everyone has a Dark Passenger of some sort. A part of us that no one else knows or sees. This Dark Passenger rides around with us everywhere we go, but isn't always prevalent. Sometimes it just watches and observes our behaviour, but it's always watching, judging and calculating its next move. Some people's Dark Passenger is a hidden habit: alcoholism, a mental condition, a fetish, etc... The Dark Passenger is not necessarily negative, but it can only be revealed to those we truly trust. The Dark Passenger is a shadow that follows us throughout our lives and we must learn to live with it in peace.
With the music and lyrics, we wanted to express what was inside us: demons, love, anger, pain, feelings towards the world around us, etc… Through our music and lyrics, we connect to others, and we hope others feel the same way when they listen to our music. There is nothing more special than when a fan comes up to you and tells you how your music has touched and helped them. It’s something that binds us together and inspires us to create more. This album and the single Waiting For The Storm are everything that we wanted them to be. The artwork, the music, the titles of the releases, and the story behind each song.

Speaking for myself, I experienced Dark Passenger as the most diversified and best produced work of your entire discography. How would you analyze your evolution as musicians regarding important aspects like writing, recording, mixing, global production?
Yone: Thank you very much. We are extremely proud of Dark Passenger. When we started production on the new album in 2012, we had no real agenda, no concrete direction. We wanted to be free to do music we really loved. No particular genre, just good music. In fact, one of the most popular songs on Dark Passenger is Behind My Smile, which is more of a synthpop/future pop track. We weren’t even sure if to release it as a Decoded Feedback song or not because it was very different from our other material, but then we realized that it did represent a different side of us and that we cannot be confined inside just one genre. We took a risk and it paid off! We truly followed our heart and soul on this album and single, and released exactly what we felt represented us.
It took 4 years of hard work to produce, but it was worth every single moment. We ended up with over 45 songs!!! But in the end, we only chose the best ones that we liked the most. We wanted to be authentic and true to ourselves and hopefully people would like it too…and they did!!! That proves how important it is to stay true to yourself and your vision, not try to make music to become more popular and successful. If you compose the music you are passionate about, others will feel that passion and authenticity. People really connect to this.
Over the years we have really built up both our studios. Marco’s studio has tons of gear, mainly analogue. I have a bit less gear, but specific gear that I absolutely love. I also incorporate some soft synths whenever I see fit. I love the V-Collection by Arturia, whereas Marco doesn’t use soft synths. We allow ourselves full freedom and work excellently together. We respect each others opinions and vision. We have a very good partnership. Quite amazing for Exes ;) We write, produce, record, and mix in our studios, then get it mastered by Andy Krehm of Silverbirch Productions. He’s an amazing audio mastering engineer.

Referring to evolution, what’s your vision about the evolution of electronic music and EBM from the 90s till today?
Yone: The 90s were such a special time for alternative electronic music. The scene was vibrant, exciting, experimenting and growing. There was EBM, industrial, industrial-metal, industrial-rap, electronica, trance, etc… Many types that all got along well together. It didn’t matter what type of music you liked, you could go to any alternative club and dance to different types of alternative electronic music mixed with goth, alternative rock, brit pop, etc… It was a much more open time for music.
As time went by, we have found the genres becoming more separated and less fluid. People, in general, are becoming less open to different styles of music. They stick to what is familiar to them. Marco and I listen to all genres of music. Good music is good music, no matter the genre. I hope the mixing of genres will become more popular again soon.

Tell us a bit more about the clip Waiting For The Storm and the movie soundtrack?
Yone: Waiting For The Storm is connected to Dark Passenger. We can all feel the oncoming storm of our own personal Dark Passenger. It builds up inside of us and is waiting to explode. It’s like we are standing on a cliff waiting for its arrival. We chose the artwork from Michael Lentz because his amazing painting completely represented that anticipation of the storm. We chose Jarek Kubicki’s artwork for Dark Passenger because it totally encapsulated the feeling of a Dark Passenger brooding inside someone. Both art pieces captured a visual version of our musical vision.
Filmmaker Rogelio Salinas created the official music video for our song Another Loss from our last album disKonnekt to rave reviews, so we approached him again about doing the official music video for Waiting For The Storm. He loved the title and idea so much that he was inspired to write his first full-length feature film called Waiting For The Storm. For the music video of the same name, he included footage from his movie. In addition, we will be doing the soundtrack for his film, so it’s like cross promotion and support. A very cool concept. Currently, I am working on the soundtrack as we speak. The film will be released worldwide at festivals in 2017.

You’ve been signed on several major labels from the scene like Cleopatra and Metropolis in the USA plus Zoth Ommog, Bloodline, Out Of Line, Dependent and now Infacted Recordings in Europe. How come you’re regularly singing to a new label and what do you expect from a label today?
Yone: The first label we were ever signed to was Hard Records Europe and licensed to Cleopatra Records in the US. After Hard Records closed, Zoth Ommog contacted us and signed us immediately, which was so incredible! For the US, we decided to sign with Metropolis Records because we liked the direction they were going and we have been on Metropolis ever since. We are very happy with them. As for Germany, yes we did change a few labels, but mainly due to the labels closing (Zoth Ommog, Bloodline and Dying Culture). Out Of Line and Dependent were great labels and we are very thankful for all the great things they did for us, but we decided to return to our roots for Dark Passenger and work with Torben Schmidt again. We are very happy we chose Infacted Recordings. It’s a great relationship. We think it’s very important to work with a label that believes and supports you. We have been very lucky to work with such great labels during our career.

THE JUGGERNAUTS • Funny that apparently only bands as Front 242, NEB and Skinny Puppy tend to created clones? What about the zillion of Beatles/Smiths/Joy Division/etc. sounding bands out there? Oh right, they are ‘just’ inspired!
SHAARGHOT • We're going to offer Germany a great performance in order to thank them for giving us the opportunity to represent our country !
ANDY OPPENHEIMER (OPPENHEIMER ANALYSIS, OPPENHEIMER MK II) • Minimal? I want to fill Wembley Stadium
PSY'AVIAH • Continuing with albums with guest singers was a natural evolution for me
WILD ROSES FOR THE EXIT • I really want the experimental side to take over eventually but I do love the beauty of a classic pop song.
IMMANENT DISTANCE • The story we started on the first album, comes to a climax on the second album.
DAGEIST • Music is a real pleasure to share and it doesn’t have to be a commercial obligation.
LUPI GLADIUS • We can say that we’re living the “death of Europe” and there is nothing that we can do about it.
NERVOSA • All we want to do is to play everywhere we have the opportunity
ME THE TIGER • We believe that it is better if people dared to stand up for their beliefs and values, even in public. Otherwise, society will crumble from within.