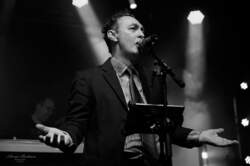 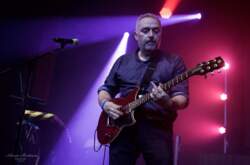 I Think I’m Still As Revolutionary And Opinionated As Ever...

Set up in the 1980's by Rodney Orpheus and Paul Dillon, The Cassandra Complex got rapidly completed by the addition of Andy Booth. The album “Grenade” released in 1986 on Rouska became an instant success revealing the electro-punk style of the Leeds combo to the world. They next got signed to the Belgian label Play It Again Sam on, which they released several productions. In the meantime The Cassandra Complex had moved from England to Germany founding base in Hamburg. Rodney Orpheus remained the only core member, but got joined by the great German musician Volker Zacharias (Girls Under Glass, Trauma). The last studio album “Wetware” was released in 2000 on Metropolis Records (USA) and Synthetic Symphony/SPV (Germany). The band reformed in 2007 for new live concerts, but Paul Dilllon left again and got replaced by Axel Ermes (Girls Under Glass, Trauma, Nefkom, ao). Rodney Orpheus got also involved with the side-project Sun God (featuring Patricia Nigiani and Marcus Giltjes), became live member of The Sisters Of Mercy, produced several other bands like Girls Under Glass and Catastrophe Ballet, became creative director of the London Symphony Orchestra and last, but not least he got active as a writer. During the past few months several albums of The Cassandra Complex have been remastered, which gave me the idea of this interview. There’s too much to ask about this legendary band, but Rodney Orpheus kindly accepted to answer a few questions about the past, but also the future… For this interview I would like to thank Side-Line and Peek-A-Boo for their interest to each publish this interview as a kind of ‘collaboration’ between both Belgian online platforms.

Several Cassandra Complex albums have been recently remastered. I’m intrigued why you remastered some of these albums. Weren’t you satisfied with the original mastering or does it say something about perfectionism?

When we originally made them we had very limited budget and technology at our hands. So the original records never sounded as good as they did when we recorded them in the studio. We wanted to fix that. The new remasters actually now sound the way we originally planned for them to be. So they aren’t some kind of new remix -it’s more like making them the way they originally sounded in the studio while we were recording them.

You first official album “Grenade” is one that has been remastered. The album became an instant success revealing Cassandra Complex to the ‘world’. More than thirty years later now, how do you look back at this album and what has been its real impact on later work and your career?

The astonishing thing about remastering this album is how new and fresh it still sounds! It’s both raw and exciting, but also has some fantastic songs on it. When we first brought it out, I remember the record company complaining about the longer, slower songs on the second half of the record, but listening back those really stand the test of time. Stuff like “Helen Earth” and “Motherad“ still sound really strong and powerful.

Cassandra Complex was a band from Leeds. What did you keep in mind from the Leeds scene, which featured some legendary bands such as The Sisters Of Mercy, Red Lorry Yellow Lorry, March Violets, Gang Of Four ao? What about friendship, jealousy, rivalry?

That scene was interesting in that you had a lot of bands in a very small area all at the same time. Of course there were rivalries, but in general I think most of us got on very well. We were pretty close to the guys from The Three Johns, knew The March Violets quite well, and saw a lot of early Sisters of Mercy shows :-)

There were also other great bands that history has kind of overlooked, like Delta 5 for example.

It was a very exciting time and place to be a young person making music.

The album you released with Sun God in 1995 has been remastered as well. This album was definitely something totally different and new for you. What did you keep in mind from that period and this opus? And what did this album maybe reveal about yourself?

When I made that record I had been making records and touring constantly with The Cassandra Complex for about 10 years, so I really needed to do something different. My creativity was suffering because of doing the same thing over and over and over again. So I decided to do a record that had nothing at all similar to The Cassandra Complex -no guitars, lots of natural sounds and samples, a female vocalist. All sorts of things that would get me out of the rut that I was in.

The Sun God-album was released when you were already living in Hamburg. I guess it must have been a shock moving from England to Germany, but on the other side, this city has always been a prolific place for German underground artists. What has been its real impact and the influence on the further releases of Cassandra Complex?

Yes, I was in Hamburg at the time. I loved living there, it’s a great city, and at that period there were some really interesting musicians, so it was kind of like Leeds had been a few years before. And of course Andrew from the Sisters was living there too. Around the period pretty much everyone involved with The Cassandra Complex was German anyway (except me). Not only the musicians, but our crew, graphics and video people etc. We all lived in 2 houses close to each other in Altona so we were able to work all day every day together writing and recording, and rehearsing for live shows - we did a LOT of live concerts back then!

But in general, I just loved the atmosphere in Hamburg. I love being near water, and I love very laid-back international cities, and Hamburg just fit perfectly.

The album “Cyberpunx” (1990) hasn’t been remastered yet although I think it has been a real special one. I mean the situation between Europe and the Arab states hasn’t really changed, don’t you think? But the situation in Europe became quite tricky as well. What do you think about the evolution here in Europe, which led in England to Brexit?

Brexit is the stupidest mistake that the British government has ever made. We have always considered ourselves a European band -there’s even an EU flag on the cover of the “Hello America”-album. Note that I am actually a dual national -I’m both British and Irish. So at least I get to stay a citizen of the EU, even after Brexit :-)

The EU is far from perfect, but it’s definitely better than the wars we used to have in Europe. I’m a big supporter of the DiEM25 movement, which seeks to reform the EU from within. We need to keep it and make it better, not leave it!

You’re now involved with music for more than thirty years! A lot of things have evolved, changed, disappeared and made place for new things. What’s you perception about it?

The technology has changed massively (and I was one of the people involved in doing that), but unfortunately the business side has changed very little -or it’s gotten worse. It’s still dominated by a very few massive corporations leeching off the work of artists while pretending to be their friends. It’s capitalism at its very worst.

There’s still some great music coming out though, and in the end that’s what counts.

How much of the young Rodney Orpheus do you still recognize in the artist you are today?

A lot I hope! I think I’m still as revolutionary and opinionated as ever... :-)

But yeah, I still hold all the same ideals. It’s nice to have more technology and resources to work with. I am definitely a lot happier in my life now than I was then, and that’s great, but that also makes it harder to make music in some ways -pain and loss is a great motivator to do art. But it’s not sustainable.

You’re still a writer so I can imagine literature has always been an important item in life. But it’s also interesting to see the contrast between a writer and a musician; the writer mainly working in the shadow, observing what’s happening around him (like a voyeur) and the musician/singer performing on stage in front of his audience (like an exhibitionist). What’s your feeling and your experience?

That’s very true. It’s like two sides of the same coin. Writing is a very solitary experience -you spend a LOT of time alone with your thoughts. That’s a good thing because it helps you get inside your own head and work on understanding and improving yourself. But on the other hand, humans are designed to be social creatures, so it has its negative sides too. That social side is one of the things that keeps driving me to music. That’s why I tend to move between one world and the other, to keep myself balanced.

I read there’s maybe a new Cassandra Complex album in the making? What brings the future?

Am actually working on it right now ;-)

We are hoping to have it all finished in the Summer. It’s really starting to sound pretty good I think...

BILL LASWELL • 'Sometimes thing sort of “follow a path”...'
THE COLOURS OF SILENCE • Isolation Is Good For Art. Embrace It And Use It
BLIXA BARGELD • 'The way we work is so…traditional'
THE JUGGERNAUTS • It's striking, in 'mainstream' genres no-one is making a big deal about band's similarities and their possible influences... But oh dear if you dare make EBM!
LAST INFLUENCE OF BRAIN • L.I.O.B. Has Always Been Such A Distraction For Us
STEVE VON TILL (NEUROSIS) • 'The greatest sentence in prose would have no place in a song...'
MISERIA ULTIMA • Doubt Is The Worst Enemy Now
PAGE HAMILTON (HELMET) • 'I think in 2021 we’ll have a new album...'
MARK E MOON • We Know We’re Not Re-Inventing The Wheel!
DON GORDON (NUMB) • 'In many ways the first Numb album was one of the ‘easiest’ to produce...'