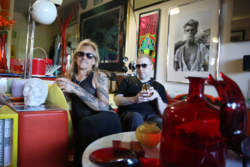 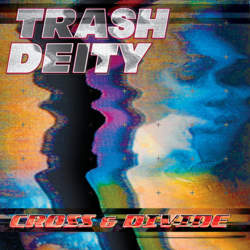 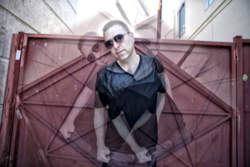 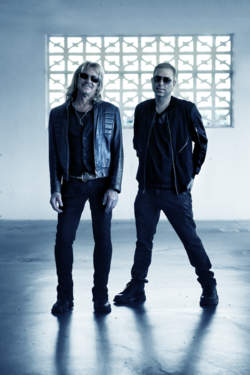 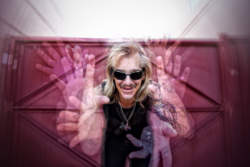 7th September 2018 marked the release of Trash Deity's debut album, "Cross & Divide." We'd like to thank John and Groovie for taking some time to answer some of our questions.

What was the catalyst for the two of you working on a project together?

GM: LOCATION. John contacted me about working on a track since we were both from illinoiZE living in Luxurious Los Angeles.

JDN: We hung out a few times first socially then he came to my Studio one day and I played him some tracks. We wrote “Run 4 Your Lies!” that night.

The album title, "Cross & Divide".... where does that come from?

GM: Made up pulled out of the lyrics, a chant of a Crazy who wants out by blocking things out? huh???? I made up the rhyme while we wrote it on the Spot? da da

JDN: The song came first, then it seemed like a great title and comment on the times.

"Trash" And "Deity" are two words that most might find to be diametrically opposed. But perhaps it eludes to the dynamics of what the project is about? Can you talk about some of the creative dynamic and how perhaps some of your opposites merge to create Trash Deity

GM: Interesting. a whole year passed before this title was chosen/band name/ I mean my rebel Spirit says it says FuK God. But stayin in the cosmic realms of Karma & stoned Love, that's the punk version xplaination. sigh.

JDN: I have a massive band list we accumulated over a year. We just couldn’t agree on a band name and this was the one we both liked. It can be making a lot of comments about a lot of things, I have my own meanings.

Is it more important for you to leave a lasting emotional impact on the listener or to be remembered for creating an album that people could drink, fight or f#$k to?

GM: Anything that causes a reaction is a good start !!!

JDN: I think the lasting emotional impact is more rewarding but there is something about connecting with people on just a visceral level that is great too.

GM: Maybe Peg out the Next LP. Touring ? We'll just have to see what Comes Together? mmmmmmmmm

JDN: They ideas of touring and shows keep coming up, it just has to make sense, like touring with another established Metropolis band, or bigger events, etc.

How was working on the Trash Deity project different than the process you had with your respective bands?

GM: It had a spontaneous momentum thoughout. I would Jump in & out. Comeback do it again. Less Puzzle Like more freestyle xpression. I guess that's my standard?

JDN: Blue Eyed Christ is essentially me in the studio, or working with other people on my vision, so this being a collaboration I have to realize the strength and the crutch is it’s a collective vision and no one singular vision.

Two of the strongest tracks on the release are Harddrive and Finger on the Trigger. Can you take us inside those tracks and talk about them and their lyrics?

GM: Finger happened early on so its less contrived to me where as the Gutty Hardrive came as we were further into it as it was the 4th track we wrote pre-lp concept.

JDN: Finger on a Trigger has an interesting narrative, one of the most open for interpretation really. I always think of it as more of a psychological trigger than the literal interpretation of a gun. The video concept was all of Groovie Mann’s art in a video, but I was actually adamant about not having guns involved since it’s too easy and obvious.

The album was created over the course of 5 years, right? Why did it take so long and how many tracks did you have to leave off? You noted that the final set of tracks were intended as a journey. Were the songs left off because they didn't fit a part of that said journey or theme?

GM: This took about 3 years. There were tons of tracks to chose from, I picked what I liked to work with, mostly so the others weren't developed but set aside, I'm sure there's a followup hiding in the shadows ??

JDN: Yeah, 3 years, but a lot of that was because Groovie may be off touring, I was off producing or mixing, so we weren’t on a regular schedule of getting together. I’m sure the next one won’t take so long since we’re in the groove. We have some bits and pieces with vocals, and often when working on new Blue Eyed Christ songs I’ll set tracks aside that sound a bit more Trash Deity.

Some fans might be curious from a technical standpoint, what equipment/programs were used to create the album. Can you talk about that a bit?

JDN: Everything ends up recorded and mixed in Pro Tools. I use a lot of plug in synths and samplers but love my hardware also. I have a lot of vintage synths from a 1977 Micromoog to a Modern Novation Bass Station that I love too, a lot of 80s Roland synths. I used my Roland Juno 1 for some effects on Hardrive.

Many many years from now, a very distant relative locates a box in the attic of an old house. In the box they find the Trash Deity album and something to play it on. What do you want this person to know about you if only listening to the music and words?

GM: This this is the Sound of the GlamPunKXperimentalArtMusic. Cross & Divide the otherside!!! Groovie Mann/Franke Nicholas Nardiello

Thanks for yr. time... the final words are yours.

GM: (cross & divide) the otherside which means Cross the borders & live your life true for YOU. dividing it is Splitting it in half so YOU can walk through the Center of it and BE THE CENTER OF IT ALL> YOU.!!! HEEEEEEEEEAAAAVVVVVVVVVEEEEEEEEEEEEEEEEE!!!!!

SONOLOGYST • A ‘Vertical’ Approach To Music
MERZBOW • Interview with Masami Akita (Merzbow)
STRONG PRODUCT, 0KONTROL • What RUSSIAN EBM and ATOMWAVE are all about
SOPHYA • Luckily The Human Being Is Bored Easily And Vinyl Saved The Day
DEAD ASTROPILOTS • There Is Also Something Related To Decay That We Love With Vinyl Records
MICK HARVEY • Interview with Mick Harvey (The Boys Next Door, The Birthday Party, Crime & the City Solution, Nick Cave and the Bad Seeds, PJ Harvey)
SN-A • I Also Love Telling Stories Without Words
RAT SCABIES (EX THE DAMNED) • 'I never planned to make a solo record... It was something I was doing for fun.'
LIZARD SMILE • 'I still see it as the expression of appreciation par excellence to buy a physical album. It still remains more ‘real’ … one way or another.'
DANA COLLEY (VAPORS OF MORPHINE) • From the beginning to the last note