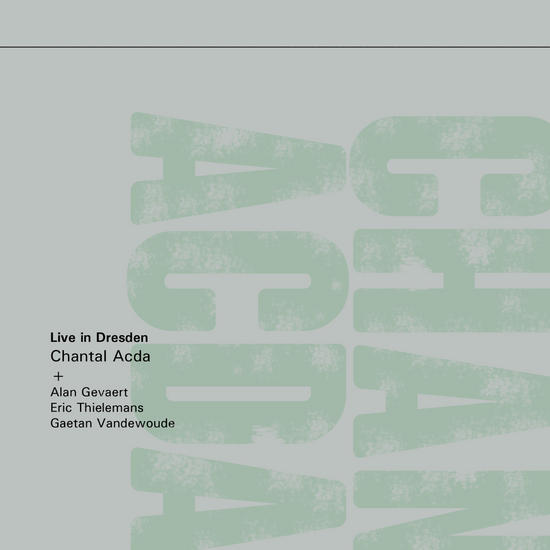 The album 'Live In Dresden' by the Dutch-born singer and songwriter Chantal Acda is another refreshing release from Gizeh Records.'Live in Dresden’ features six songs from ‘Let Your Hands Be My Guide’ played by Chantal Acda, Alan Gevaert, EricThielemans & Gaetan Vandewoude. I have been listening to this enchanting album a few times and it keeps growing on me after each listen. There is a mesmerizing, low-key intensity to her music making. Comparing the songs performed live with the studio versions, the timbre of her voice had another, fresher bloom. She and her fellow musicians are definitely going places with their exquisitely colored sonorities. The musical fabric is not dense or thick, but mellifluous and weightless. Her singing approach makes the vocal line seemingly just another instrument among the others. A reticent, pulsating, warmly glowing instrument, that is.

So what kind of music does Chantal make? Acoustic? Indie-folk? Ambient? Singer-songwriter? The ever importunate murmur: categorize it, categorize it. She is, in fact, all those genres mentioned, and yet so much more. Chantal is Chantal. If you listen attentively, you will be able to trace some of her influences like Mark Hollis. It will not make people go ah-ing and oh-ing in awe, but nevertheless it will most certainly cast a light spell on you. Beautiful. Chantal is definitely an artist of more with less. Moreover, and to my great relief, she doesn't try to sell herself by the means of clichés like sex, religion, Teutonic fairy tales and cheap leather imitations. She's just herself, letting her talent and musicality speak for itself.