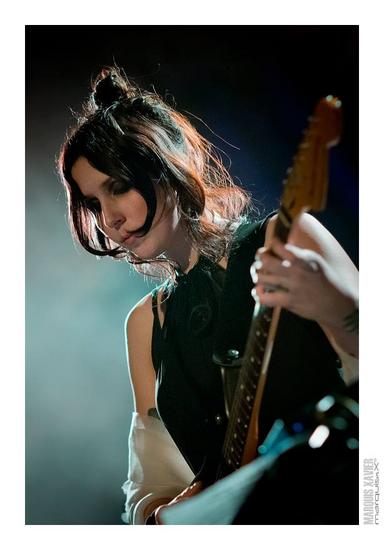 Only 6 months ago, Chelsea Wolfe had given a remarkable concert in Antwerp with one acoustic set and one electric set. This time, she was playing at the Vooruit in Ghent in the framework of a tour as co-headliner with Russian Circles. A strange combination as Wolfe's dark-folk-electronic crossover music has very little in common with Russian Circles' instrumental post-metal. But both band share the same label (Sargent House) and are very good friends in real life and wanted to tour together, as Wolfe told me after the show. One thing was sure: as you entered the Concert Hall of the Vooruit, you could tell by the t-shirts that the great majority of the audience was there for Russian Circles.

Chelsea Wolfe was presenting her brand new album, "Pain Is Beauty", one of the best albums of 2013, in my opinion. Before she took the stage, there was a tape playing the dark and lyrical music of the Polish composer Henryk Górecki. Then, Wolfe appeared, dressed in black with a long white veil floating on her shoulders and arms. The first synth notes of "Feral Love", the first song on her last album, resounded in the hall and we were plunged in a dark trip-hop and tribal atmosphere dominated by an amazing drum pattern on the low tom by drummer Dylan Fujiok. Then came a surging progression in power which culminated with bass synths, eerie noises and Wolfe's very high vocals, until the introductory synth notes played by Ben Chisholm returned to close the song beautifully. The second new song, "We Hit A Wall", was a more 'classical' Wolfe track with its hypnotic bluesy overtones, reminiscent of Wolfe's first two albums.

A perfect transition to a short flash-back part featuring two older tracks: "Mer" and "Tracks (Tall Bodies)", both from the album Ἀποκάλυψις. The sound was good although the mix was giving a bit too much importance to the drums and the bass sounds. Then it was back to the new album with the long and hypnotic "Reins": it started like a simple waltz with just Wolfe's voice and acoustic guitar but after a while, a tribal drum came in and the composition took a new direction, with a relentless progression in power and vocals that sound like incantations, supported by Kevin Dockter's subtle guitars, until the piano made place for the final heavenly voices. Simply astounding.

In the next song, "House of Metal", a gorgeous atmosphere à la Dead Can Dance set in, with a bass organ and a melodic synthetic xylophone riff. Chelsea's lingering voice was ghostly and the song swelled slowly, with beautiful voices in thirds, trip-hop-ish drums. Here we missed Andrea Calderon's violin a bit.
"Sick" stressed even more the dark and gloomy atmosphere: first a drone bass sound, then beautiful romantic synth string chords and Chelsea's voice, simply heartbreaking. Then the instruments went away and the voice was left alone with a minimal, pulsating synth beat. Wolfe then quit her microphone stand and came to the front of the stage. Even the metalheads were silent and you could hear a pin drop. Slowly, we were carried away in a trip-hop bliss evoking Massive Attack: amazing!

When we thought we had reached the summit, came "Kings". Again, I was simply crucified by the tantalizing beauty of this new song. Think of a gothic Portishead melody, hypnotic and very dark, with cascading minor chords and a melancholic voice that took us very, very far. Then in the middle, again, a radical change: the music stopped and Wolfe played a distorted, descending guitar lick. Ben Chisholm left his keyboards and grabbed his Rickenbacker bass for a noisy, nearly prog-metal instrumental ending. Check the video of this unique moment below:

After this climax, the band played three of their most powerful 'old' songs: the terrifying "Demons", the bluesy "Moses" and the mesmerizing "Pale On Pale". Following the organ intro, Chelsea played the bluesy riff which has now become a sort of classic, and started singing this beautiful and plaintive melody with arabic overtones that are somehow reminiscent of Lisa Gerrard. The end of the song was an amazing noisy, free style wall of sound that lasted for more than two minutes, until Ben raised the hand with authority to put an end to it. A moment clearly appreciated by Russian Circles' fans, as the whole venue applauded with enthusiasm.

We thought that the set was done but no, the band stayed on stage to play "Lone", from the last album, a very simple song consisting of four simple acoustic guitar chords (detuned one tone lower, in Dm, as usual), on which Chelsea's unique voice hovered wonderfully. Here, again, the concert hall was completely silent, as if hypnotized by the music. "Echo", their cover of the Rudimentary Peni song, finally closed the set. The guitar intro evoked again Dead Can Dance, more precisely the intro of "Cantara" and Chelsea's enchanting voice gave us shivers down our spine until the band left, leaving us wanting for more.

In a nutshell: a truly fantastic concert! Chelsea Wolfe and her band have pushed their craft even further towards perfection, creating a sum of (nearly) everything that I love in music: depth, power, inspiration and soul. It was like a dark ceremony led by a beautiful and talented witch, who presented us a musical kaleidoscope with blues, folk, metal, drone, tribal, trip-hop, dark folk, classical, rock, all this combined with coherence and authenticity. One of the best concerts of 2013.

After the show, Chelsea Wolfe and Ben Chisholm came in the concert hall to talk with fans and sign autographs. Talking with them, I learned that Wolfe is working on a release with American dark-folk legend King Dude and that the band is already working on songs for the next Chelsea Wolfe album.

Read my interview of Chelsea Wolfe, done in May in Antwerp, here.
www.chelseawolfe.net/‎

After a short break, the second co-headliners, the Chicago-based Russian Circles (the name is taken from a drill exercise used in ice hockey), took the stage and though their instrumental post-metal is not my cup of tea, I was impressed by their musical mastery, especially that of guitarist Mike Sullivan. The band played on a very dark stage, with a minimalistic light-show, all the attention of the audience being focused on the music.

From what I heard, they played two songs from their last album, "Memorial" (Sargent House): "Deficit" (my favorite) and "1777" and a few songs from "Empros": a.o. "309" and "Mlàdek". During the encore, Chelsea Wolfe joined the band on stage for the title song "Memorial" and from the cheering of the audience, you could tell that her show had convinced a lot of metal fans! Then Russian Circles closed their show with the powerful track "Youngblood", from the album "Station".

A very energetic show but I can't help thinking that this instrumental post-metal music, very much in fashion for the moment (Heirs, Isis, Godspeed You! Black Emperor, Pelican,...) sounds unfinished or at least incomplete: it's like a backing track for a singer to sing on. The problem is there is no singer (with the exception of "Memorial") and that's precisely what's frustrating. A bit like in techno, the music is stripped down to two elements: rhythm and basic sound. You have to accept the predicate to enjoy the music. That's why I prefer bands like Tool (for which they opened in 2007) or Katatonia, where instrumental parts alternate with brilliant vocals.