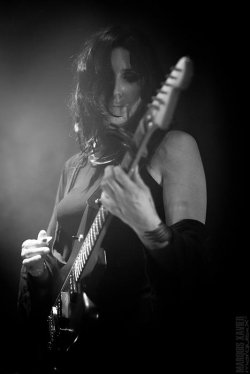 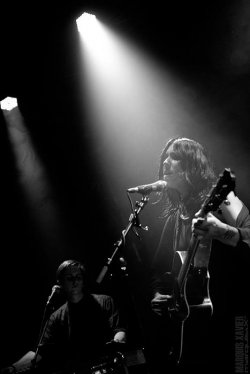 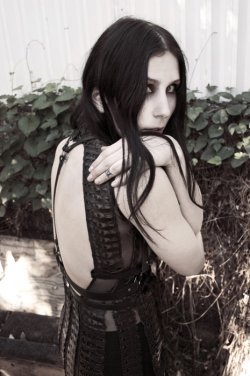 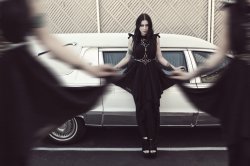 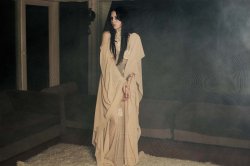 On May 6th, Chelsea Wolfe played a fantastic concert at the Trix in Antwerp. Before the concert, Phil Blackmarquis had the opportunity to meet Chelsea for an exclusive interview, done together with Michael Thiel, aka Weyrd Son, founder of Weyrd Son Records and a huge fan of the American singer/songwriter.

PhB: Thank you very much for this interview. You are in the middle of your European Tour right now. How is it?
It's been cool. It's been different than usual because we're doing a half acoustic, half electric set, so it's been a little wierd sometimes to balance the energies of the two different sets. But it works out well.

PhB: Why did you decide to split the concerts in two sets?
We had the new(ish) acoustic album that had come out in October, so we incorporated a fair amount of it in the set but without doing an entire acoustic show, just to challenge the 'old' songs with something new... And we split the show in two sets...

PhB: In the US, I think it was only acoustic?
Yes, it was a suggestion from some of the venues that we'd do an acoustic and an electric set and it kind of worked out, so...

WS: Is your acoustic album, "Unknown Rooms" a sort of bridge for you between the 'old' and the 'new' Chelsea Wolfe, especially since you changed label?
I think so. My label had asked me if I wanted to do an acoustic album because I had so many old acoustic songs. People were asking me when I was going to release songs like 'Flatlands', which I had done years ago but hadn't released yet. So, when the idea came up and I started compiling these old recordings, I decided to do some new ones as well. At the same time, I wanted to get away from the imagery of my former label, Pendu.

WS: Is there any reason why you hadn't released these old songs before? Because, to me, they have as much strength as songs from 'The Grime And The Glow', for instance.
There's no real reason. Music often happens without order or time, you know. The album that come out this fall has songs which I composed two years ago. It's all about finding the right time and context for a song rather than writing it and putting it on a record immediately. Sometimes, it's an older song that seems to fit or something you've just written that helps putting the puzzle together.

PhB: I heard that 'Unknown Rooms' has entered the charts in the US?
I have no idea. I don't know.

WS: It's something we saw on your Wikipedia page. It says that this album is your first album to enter the Billboard charts in the US. (Note: No. 25 in the folk chart and No. 35 in the Heatseekers chart)

WS: On the next album, there will be several electronic songs. Is it something to do with the 'Wild Eyes' project you have with Ben Chisholm?
Yes, we've had that project for several years but it just didn't do right to have it separated from the Chelsea Wolfe project because it's the same people, Ben and I. Same vibe, just a different sound and different instruments so we decide to combine both in one project.

PhB: Like the new song, 'Kings', for instance, which you play, would you say it is an example of a new song in the style of Wild Eyes?
Yes, it's one of the songs that come from it.

WS: So, Wild Eyes is totally behind you now?
As a project, yes. A lot of the songs end up on the new album...

PhB: And are you going to release the cover of 'Dark Rooms'? I really love it.
'Dark Rooms'? You mean that cover we did a long time ago? I don't remember why we did that. No, I don't think we will release it.

PhB: So the next album is planned for September/October? I understand it will be more electronic, but also folk and rock?
Yes, with a wide range. It's gonna be on Sargent House as well.

PhB: Do you already have a name for the album?
I have one, pretty positive but I'm not sure I can tell already, but we will announce it pretty quickly. So I have to make up my mind.

PhB: You also played another new song, 'Feral Love' yesterday?
Yes, this one has been there for a while as well but we re-recorded it for the new album.

WS: I read in an interview that you wanted to do something with a choir of singers?
It's always been like a desire to do that. You know: I have a lot of idea's I want to try out but I hope I have enough time to keep experimenting with things like that.

WS: Every album is quite different, that's the great strength of your music!
PhB: You also introduced a violin on the last album, with the very talented Andrea Calderon?
Yes, she played on the acoustic album and also on the new album, so...

WS: Will she become part of the band?
I don't think it's permanent but probably for a number of shows and tours.. In every tour, we try to make things a little bit different so,;.. But she's definitely a great addition to the project. I love to be able to have the vocal harmonies. It's always hard to find someone who is good at harmonies and she is really good.

PhB: And her instrumental bridge on the violin between the two sets is really nice!
Yes: I asked if she could write something and she came up with that really fast...

PhB: Let's talk about your sources of inspiration and your lyrics. Why this fascination for death, car accidents and all these things?
A lot of my songs have to do with death because I've never really had to deal with it. No one close to me has ever died yet. And I think that singing and writing about it is my way to try to understand it. I'm also interested in materialities of the world, natural disasters, the way that life is shaken up so quickly and unexpectedly. You think about life as a routine and one day, an earthquake or a tsunami can change it all in a second. That's the kind of things that I find interesting to write songs...

WS: What about this song, 'Boyfriend': I knew it was a cover but I didn't know that Ben (Chisholm) co-composed it.
Yes, it was composed by Karlos Rene Ayala, a friend from my hometown, which we both knew before we started playing music together. I really loved this song when I heard it and I didn't realize that he had played on it, so we ended up redoing that song on the acoustic album.

WS: How was the tribute to Rudimentary Peni received? Because it didn't really get lot of coverage in the press.
I think some people were confused. I called it a Tribute album because it's not just covers, I just took the lyrics. But I haven't heard anything negative about it, apart from people being mad about the way the songs were covered but I like it a lot!

WS: Are you still in touch with the guys from the band?
They heard the album and seemed to like it. C. Orr did the artwork for it.

PhB: What happened in Aachen? You had to change the venue a few days before the concert?
It's because of a cover I did years ago and the guys of the venue thought that we were a fascist group. So, we were kicked out of the festival where we were supposed to play, so we ended up playing at the Musikbunker, which is ok. It was a nice show; I liked the place. It's too bad that people associate us with things like that. I don't want to be insensitive; I'm not from Germany so I understand that feeling, with history, you know... But I don't want to be associated with fascism...

PhB: Thank you very much, Chelsea!

Check the review of the concert here.

IMPLANT • Run, run, run... Non-stop scrambling on the hamster wheel to become the perfect productive citizen!
SNOWY RED • This tribute to Snowy Red allows us to discover a whole new generation that gives new life to the minimal wave music (exclusive interview of Weyrd Son)
PSYCHE • One thing I learned is that you should really treat your fans with respect...
SURGYN • You are a product. Sell yourself.
LEBANON HANOVER • We live in a completely different way from everyone else. We have no jobs, this gives us a lot of time to think and to write.
ATTRITION + MONA MUR, JOANNA DALIN, TY LEAN & IAN ARKLEY • Attrition is my personal cathartic vehicle for attempting to make some sense of this world I find myself in.
ROME • I like living out of a suitcase!
METSATÖLL • Watch out, we are Estonian Werewolfs!
FUZE BOX MACHINE • It all started when 2 crazy guys met back in the eighties....
PIETER NOOTEN • In my music I have definitely kept a sense of melancholia from the past, distilled into a new flavor.