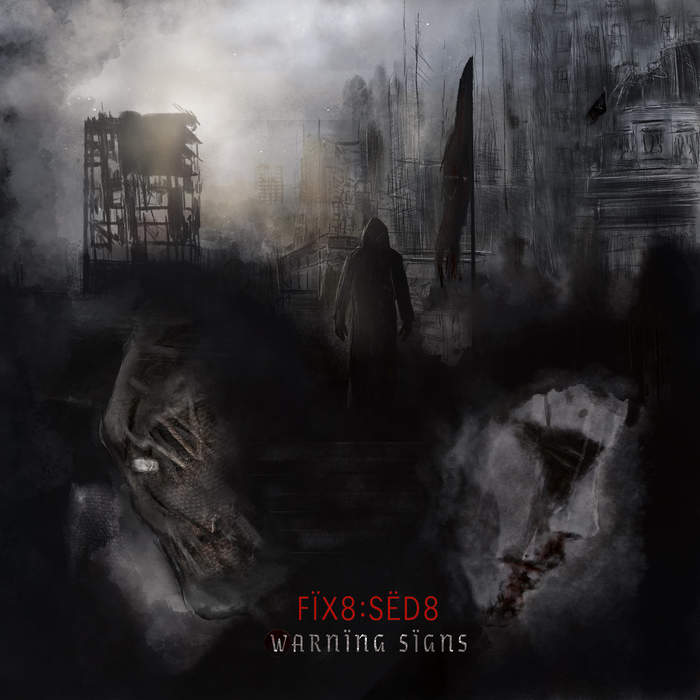 On the Amphi Festival 2019 poster a special name is featured. On the last line, in small letters, it says Fïx8:Sëd8, an artist which you would not really expect at a large festival that supports names such as Blutengel and Lord Of The Lost. I have seen Martin Sane (real name: Martin Januszewski) perform in small clubs several times, at small-scale dark electro events that usually only attract a niche audience. The fact that Fïx8:Sëd8 is now also programmed at one of the most successful gothic festivals in Germany is therefore relatively surprising, although it helps if you are signed to a leading label such as Dependent. However, Martin will have to be content with a modest slot as an opening band: Fïx8:Sëd8 is already playing at the Orbit Stage in the early Sunday afternoon.

The timing could not be better: last month, Fïx8:Sëd8 released the album 'Warning Signs' and it is to be expected that Martin will play many songs from this new album on his summer and fall tour, which recently took off with his passage at the Familientreffen. Already at the time of the previous album 'Foren6' he had announced that the new CD would be fundamentally different. For 2 years I was wondering what he meant with that. With 'Warning Signs' playing nonstop in my car in the last few weeks I think I finally know the answer: the new Fïx8:Sëd8 is more alternative in a way. As in less electronic than what you would expect from a dark electro act. Tracks like 'Syringe Relation', 'Love' and 'In Denial' (the latter being featured on the bonus CD 'Aftermath' which you get with the limited edition) are not typical dark electro and not even typical dark electronic music generally speaking. That may sound rather cryptic, but I would not know how else to describe it.

Do not fear: there are for sure authentic (dark) electro tracks on this album as well. My personal favourite is the title track 'Warning Signs' which is the last song on the CD. This one starts ominously, with various unearthly vocal effects that are reminiscent of Skinny Puppy. After a dark and atmospheric intro/build-up of roughly 2 minutes the tone changes, which changes once again a few minutes later, after a kind of cinematic interlude. Very cool, although I wonder if and how Martin could bring such a complex song live. Another track that stands out for me is 'Within Cells Interlinked', which is strikingly "clubby" by Fïx8:Sëd8 standards. The same goes for the 'Ruptured Blood Vessel' remix of 'Embolism' on the limited bonus CD, which is more dancefloor-friendly than the original on the actual album. My top 3 is completed by 'Futile Attempts', not in the least because of the lovely vocals/vocal effects and occasional piano. The other songs do not appeal to me to the same extent but I must admit that they are really well-made. Then again I do not expect anything else from a dark electro artist who knows what he is doing.

On social media certain diehard "Fixie" fans claim that 'Warning Signs' would be (even) better than 'Foren6', but I do not agree with that. Both are very good albums, but personally I prefer the more classic dark electro style on 'Foren6' which explains why I have deducted half a point (my ratings always reflect a combination of objective and subjective considerations). But all fans probably agree on one thing: Fïx8:Sëd8 is by far the best (or at least the most interesting) addition to the BIMFEST line-up this year. Go watch it!

Other reviews from FIX8:SED8
FIX8:SED8 • The Inevitable Relapse (Limited Edition)