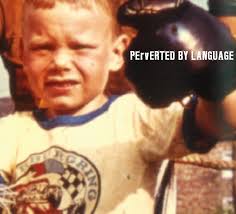 In 1983 a Mancunian schizophrenic released an album named Perverted By Language. Three decades later the name comes back, but in the form of Belgian band with some international roots. Never give up on a dream as after years this international combo (singer Jeremy Thomas is a Brit) comes up with a first full album. Ten tracks of post-punkpleasure that sounds as tribute to forgotten heroes, but also as a middle finger to today’s music scene that only seems to embrace polished pop songs (all wrapped up, of course, as alternative).

The production is neat, but raw too. From the very first minute that opener The Box is coming out of your speakers, it feels like Gang Of Four are back (not that they were ever away, but you know what I’m trying to say…)

Elephantine is a break, a sort of Crépuscule-interlude in where the guitars Guy Wilssens and Ronan Collot do a sort of Vini Reilly-twist. Elise even proves that she can sing on Amandine: quite Anna Domino-like. But after this, apart from closing track Pewter Eyes, the band continues to smash your face.

Boxers is a debut that matters. I really hate to review music that is created by friends, but to quote the almighty Moz: I certainly wouln’t hate if they become successful!

Harsh, raw, in a way poppy and melodic. The sole thing you can blame them for is the fact that they come up with an album that sounds like it’s been made in 1983. But then again, who wants to sound like Snow Patrol?