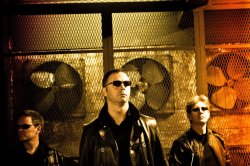 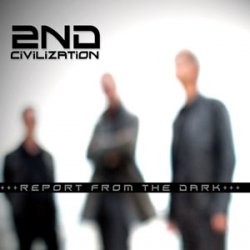 It all started somewhere in 1986 in the garage of my parents...

It was more than 25years ago that 2nd Civilization first saw the light of day. After releasing a few tapes, a little stop at Humo's Rock Rally and terrorising a few local stages they called it a day. But now, the Belgian electroheads are back with a brand new album due to be released the 20th of April. Time for a chat!

Hi guys, you’ve been around since the 80’s, give us a brief 2nd Civilization history. When did it all start?

Dekay: It all started somewhere in 1986 in the garage of my parents. After hearing the album Geography from Front 242, I decided to buy a synthesiser and a drumcomputer. Together with a school friend, we played covers from bands like DAF, Kraftwerk, Front242. After experimenting, we released a first demo tape Eros And Civilization in 1989. It was a collection of my own songs and covers. In those days, being young students, recording was done live on a 4-track portastudio with just a few synths and one sampler. Electronic gear was still quite expensive, but we were pretty creative with it. After that release we started to play some live gigs. Trick joined us and introduced the guitar in some of our tracks. The original album Report was recorded in a professional studio, but was only released on cassette. In 1991 we were selected for Humo's Rock Rally. Back then, combining synths, guitar and heavy body beats was really not done. The critics didn't have any mercy for us and after that each of the band members went his own way.

What was the trigger to start again with 2nd Civilization?

Dekay: Actually it had been on my mind for a few years. I always had the feeling the Report album deserved a much better release than only on K7. So when the Italian record label Elektro Kommando (EK) contacted me to release the original Report album on CD, we got in touch again. Since the original master tape was lost at that moment and the people at Elektro Kommando were really enthusiastic, there was only one thing to do: record the whole album all over again. Johan, the singer had completely stopped with active music playing. But Trick, guitar player and also a singer, was immediately ready to try out some reworks of the tracks. Since Trick and me were already doing the vocals on some songs in the past we just needed to test how they would work on the songs Johan did, and actually it works perfectly. We both have different vocal timbers, I’m good for the more EBM tracks while Trick has the talent for more futurepop songs. And in some tracks they make a nice combination and contrast. Last but not least, we called in our long time friend and musician Vidi, to boost the tracks with extra synths, drums and further arrangements. And so the ball started rolling again.

Were there any other projects besides 2nd Civilization?

DeKay: We all had our own projects after we split up in 1991. For me, mostly solo stuff and hardly anything commercially released, so hard to find today. To name a few, solo: Heat-Ray, Forgotten Heroes, Mindscan. And some collaborations with former elektro band Killvision under the name Trans-Vorm and Acts Of Worship the ongoing project of Peter V. Trick had been working as a producer/musician in his own studio. He combined his love for both the guitar and electronic gear in a project called Watts&Ohms, that still exists on the side. Vidi was active in the nineties in the band Rumble Creep, but later on focused on producing.

Your debut album will be released, 20th of April. Can you tell us a little bit about it?

The album will be released by Elektro Kommando, and we’re actually very glad and proud of that. It is a small Italian label, but they really specialize in bodymusic and dark synthpop. They know their territory well and constantly hunt for talent. The people at Elektro Kommando knew almost each and every demo and tape we did in the early nineties, which is really amazing. And they were very stimulating in the whole creative process. Our music might be hard to categorise, but Futurepop could be the closest genre I guess. Some tracks are just straightforward dancefloor tracks like D69 and Wives, but we also have some softer/moody tracks like Words and I wish you could be mine, for those lost souls driving their car in the middle of the night to an unknown destination :-)

Will there be new tracks on the album as well? Or did you refresh some old tracks from your tape days? It would be a shame not to use a track like D69 for instance.

The answer is three times yes. We did refresh the tracks from the tape, we did record a new version of D69 and yes, we added some new tracks. Since EK came up with the idea of releasing the old tape and the digital master wasn't to be found anymore, we first tried to take out a couple of tracks and give them a new arrangement, with todays synths and plug-ins. And we, as well as the record label, were quite pleased with it. So, one after the other followed. Dekay or Trick did the first recording and programming, then Vidi took this still raw material and re-arranged it. A refreshing approach that worked well for us. The result is a full CD album with almost all the tracks from Report, one song from the older demo Agony and terror and 2 brand new songs of which Wives could be a real underground dancefloor killer.

What were and are your main influences?

Of course bands like Front 242, Frontline Assembly, DAF, Trisomie 21 were our main influence in the old days and still are. But later on, acts like Praga Khan, Mind.In.A.Box and The Hacker were very inspiring.

Are there any plans for re-releasing the other tape Eros And Civilization as well into CD format?

Probably not. Although nothing is excluded, since the original digital master tape was recently found again,and the tracks certainly had their charm. But on the other hand, all the tracks were re-arranged for this release and some bonus tracks were added. So we think that's a better deal for the buyer.

You performed a few times in the past. Are there now any plans for gigs to promote the new album?

We did some local gigs at the beginning of the 90’s. We were even selected for the Humo Rock Rally in 91. We remember it well, it was in the famous Nijdrop in Opwijk. The audience was very enthusiastic, we saw them jumping up on our beats. But as we said earlier, being a synth band in a rock rally, was not simple in those days. But in a way, we're glad that 20 years ago, we were one of the first bands to clear the path for this years winners, Compact Disc Dummies.

What's next on the 2nd Civilization agenda?

We are currently working on a live set and working on some video material. We hope to go live around summer. And now that we've found our drive again, we're already composing new tracks. We hope this first release of Elektro Kommando will be a success. Because working with those Italian guys is a real pleasure. Their enthusiasm is very inspiring.

Final word? Nah, final words are for the dying. We are alive and kicking !

Thank you for your time and good luck with the album!

SERPENTS • I think Serpents could have been bigger, if we had signed a CD/LP contract after publishing the first tape. It was the beginning of the dark wave and EBM movement in Germany, but we didn't.
VISION TALK • We will try to make the best synthpop album in years. That is our plan. Lets see if we can do that.
AIMLESS DEVICE • We were a hard working band in the rehearsal room and in the studio, and we took our gigs very seriously. But in terms of promoting ourselves, we were absolute shite!
GUILT TRIP • Our expectations are World Domination. Why not? If Barry Manilow can do it so can we.
DEINE LAKAIEN • After hundreds and hundreds of concerts in our career we must tell that no venue is better than the audience!
WHISPERS IN THE SHADOW • We take you back to the wound Return to the pain We show you where it hurts the most And you will gasp for rain (from “Back to the Wound”)
DIORAMA • 'There’s something strange and uncontrollable happening on stage that flips a certain switch'
THE KLINIK • We always prefered to be the underdogs and do what we really like to do without making compromises.
MILDREDA • Mildreda is like talking in my mother language again, as the dark electro tunes comes out very naturally…
AND ALSO THE TREES • Nobody likes touring in the UK, it crushes your soul.

Other reviews from 2ND CIVILIZATION
2ND CIVILIZATION • I feel with this album something is starting to move and if promoters are willing to book a good live band, they know where to find us.