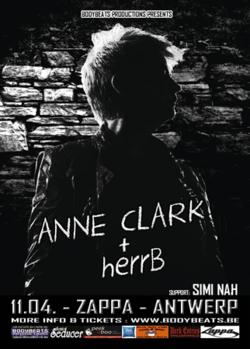 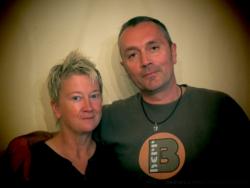 I have read on the (Dutch) Wikipedia that you started you career as a nurse in a mental hospital, was that experience the seed and inspiration for what later would become the artist/poet ‘Anne Clark’ as we know her?

Well, I don’t know about “starting my career working in a mental hospital” -­‐ I took various jobs after leaving school but for sure, my time spent working there had an enormous influence on me. I can truly say I probably learnt more there than I ever did at school!

Some days ago, my I-­‐Tunes music player (which is on random play all the time) played one of my all-­‐time favorite tracks of yours ‘Self Destruct’. I was surprised to find out I still know 80% of the lyrics by heart... and while listening to those lyrics again I realized something... You seem te be on of those few artists, who seem to write down their experiences, feelings and thoughts so pure and honest, who manage to survive in this world pretty well. I think of those who couldn’t cope with live in the end... Like Jim Morrison, Ian Curtis, Kurt Cobain, Janis Joplin... to name a few... So what ‘s you secret? How did/do you survive? ☺

My God! -­‐ What comparisons! ;­‐) People all over the world commit suicide and feel despair every day, not just rock stars! I too have had my bleak periods but quite simply I love life!
As Jean Paul Sartre said “Hell is other people” and indeed it very often is BUT there are so many other things and experiences that make life precious and beautiful!
“Simplicity” is often the best remedy.

Can you still get angry and or sad about the things that happen in the world or do you try to ignore the ‘news’ it in order to survive? For instance when was the last time you feel sad or angry towards the world?

I made a very conscious decision to stop reading newspapers some years back. The same goes with most of the “News” broadcasts. I did this for a number of reasons including yes, the amount of anger and sadness they brought up in me and also the complete sense of hopelessness I feel when it comes to various situations going on in the world. What can I do about the likes of Bush and Blair attacking and murdering the people of Iraq? The situation in Syria? Suicide bombers? Child abuse? Animal cruelty?
I can’t stop people doing evil acts. I can’t stop earthquakes and tsunamis.
ALL OF US can try and do something positive in our own small worlds. If we can make a small difference to someone else's life, hopefully this will spread further and they in turn will do something for someone else.
The media only ever chooses to drown us in negative news stories. It is poison and it is manipulation.

Me myself I had the impression that when your album Hopeless cases (1987) was released many people lost interest... not only in ‘Anne Clark’ but in general, for this kind of music. Did you experience that also? If so, what do you think that happened?

Well, after the dynamism and energy of Punk Rock and New Wave in the late 70s and early 80s there was definitely a change in the music industry. It took what it wanted from those sources and then spat out and trampled on whatever was left. However -­‐ fortunately, a lot of people stayed, both artists and public and I have been very lucky that many of those people have stayed beside me throughout the years. Also, amazingly, even new generations of musicians and music lovers discover the special energy that still echoes down the years from that massive cultural explosion and that’s great!

In the past you collaborated with artists like David Harrow and John Foxx. Are you still in touch with them or do you for instance know what John Foxx is doing these days?

I’m not too sure what John Foxx is up to at the moment, although I understand he tours still. As for David Harrow, yes we keep in touch. However he has lived in Los Angeles for quite a while now so we don’t see each other. Other collaborators like Martyn Bates and Paul Downing are good friends. In fact I will be playing in London with Martyn in April!

How/where did you meet Herr B and how did this collaboration happen?

I met herrB through the wonderful world of the internet! I love what he does and the energy in his music. As well as that we have a wonderful “communication” which makes writing and working together a real pleasure.

Instead of touring with a complete live band, your shows featuring Herr B. are with just the two of you on stage. How does that feel for you? Having almost all attention going to you....

In a way it takes me back to the “old days” of playing as half of a duo with David Harrow! Now though I have had a lot more experience and have done a lot of living, so it’s different!

The first EP ‘Fairytales from the Underground’ sounds unmistakably ‘Anne Clark’, I would dare to say, even more like your early records... So, Did Herr B. listen well to your back-­‐catalogue or did you use a whip to teach him how to support your lyrics in the right way? :-)

I noticed on you website you are going to release a second EP with Herr B. , ‘LiveWires’ and the previews sound very promising. Anything you can tell us anything more about this release?

It’s a 5 track CD ep and I hope it continues where “Fairytales From The ! Underground” left off.....

When can we expect is and will it be released on vinyl also like its’ predecessor?
“Life Wires” will be released at the beginning of April, herrB and I are currently considering whether to release it digitally and on vinyl.

And last but not least, you will be performing in Antwerp on April 11 , what can we expect to hear and see from Anne Clark?

There’s only one way to find out and that’s to come along and find out! ;-­‐)

We will do that! Thanks for you time!

Thank you very much for the interview!

SOFT METALS • Electronic Romance in the Shadow
PORTION CONTROL • Portion Control is working on the continuation of a great story!
XMH • We would love to do the big summer festivals in Germany and the rest of Europe!
DOGANOV • If the club survives? Not if it is up to us…
BLAKOPZ • As we start to think outside the box we are starting to surprise ourselves at what we can do
PSYCHOGENERATION • Our society has become one big Frankenstein that spits out and convicts it’s monsters with the regularity of a clock.
KARAWANE • There's a lot of creativity and you need to keep busy to let it flow.
[PRODUCT] • I believe that people are largely controlled by corporations and media outlets!
AVSKYDD • Everything that makes you feel sad or scared that is Avskydd.
ILLUSTRATION SONORE • Nothing was really planned for this album, it came out naturally after 2 years of existence of the band.. We didn’t pray for it neither, we just did it ourselves!