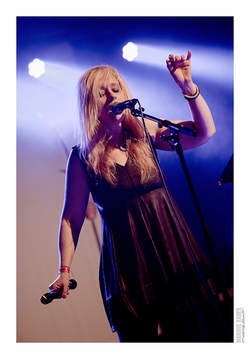 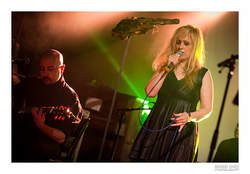 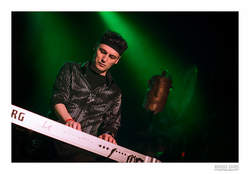 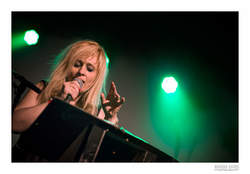 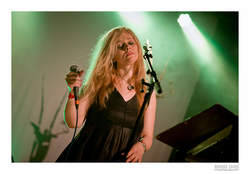 'Music is the miracle of coming into being and vanishing'

Italian formation Ataraxia was originally set up in 1985 by Francesca Nicoli and Michele Urbano. The band went through different line ups but finally found its base around the magic voice of Francesca Nicoli, joined by Vittorio Vandelli and Giovanni Pagliari. Ataraxia recently released their 25th full length album on the Greek label Sleaszy Rider Records. I got in touch with the band for an interview, which deals with much more than only music…


I think you consider music as a ‘voyage’ so where is the latest travel “Deep Blue Firmament” taking us to?

In order to start a new voyage we have to welcome inspiration and mystery as something you can’t control. We choose the option of letting things appear and go. To give up controlling is not a passive act, it must be cultivated and it engages all our intelligence, sensitivity and will. Music is the miracle of coming into being and vanishing. It is still possible to feel this vertigo if we cultivate our own availability to the GRACE OF THE EVENT. This is the starting point of “Deep Blue Firmament”’s voyage. “Deep Blue Firmament” is our trip as sailors before the stars, the firmament is our life-map over a sea of notes. These songs help us see our fears and weaknesses but at the same time bring awareness and clarity of vision. This is “Deep Blue Firmament”’ s aim.


It sounds like music is becoming a symbolic travel through the inner-self… like a quest to discover hidden thoughts, fantasies, images etc. Your music and work is a kind of meditation or mindfulness, right?

Imagine the act of inhaling and exhaling, it is exactly the same for inspiration. We feel like channels that inhale a peculiar information and we expire it in form of a music alchemy. It is just like breathing, inhaling and exhaling keep us alive, their interchange creates a balance. Our essence is emptying progressively in order to get in touch and be filled by the harmony of creation as ‘what it is above it is also down here and within us’. It is both meditation and mindfulness, of course.


Ataraxia has always been a mix of different influences and different cultures, creating a kind of ‘union’. This is an essential aspect in the world (Europe) of today so what’s your perception about it?

Our personal musical experience has grown and has been enriched all over the world meeting different cultures, different people all in touch with an inner research. We brought our own experience and we received the same from the others. Every person chooses his/her own path to be followed (and, everyone has his/her own roots, memories, hidden fears and deep desires) but if we do not feel separated, if we are connected, we are able to create a powerful energetic net. For this reason a concert is such an important thing. It enables everybody (both the musician and the listener) to know better his/her own essence and find the energy and, eventually, keep all of this in everyday life. It’s an exercise of life, to feel ourselves and to feel the other. Diversity and connection can go together.


Tell us a bit more about the composition process of your work and I especially think about aspects such as the incorporation of multiple classic/authentic instruments and the use of different languages?

Folk music means a main use of acoustic instruments rather than machines or computers and a special taste for traditional airs or themes but in our opinion, all of this has to be transformed into something new. A completely new chant born from the immutable heart of time. We feel free to play acoustic instruments together with electronic pads or instrumentation. We always did it from the very beginning and we feel that this enriches our work and gives us the chance to tell stories like modern minstrels, trying to filter what mythology, traditions and legends have handed down to us.

Concerning the use of different languages, we are mainly interested in magic power of the word, in the practice of the enchantment. Enchantment means ‘singing-inside’. Pronouncing a word is a pure act of creation and we are conscious that this creation is a revelation, a process of deeper knowledge and self-knowledge. The magic word resounds before being pronounced. Knowledge and experience happen at the same time and all of this is a sacred announcement, a message that doesn’t need rationality to be caught. It is a sort of spiritual call coming from the depths. Sometimes our music is born to speak the pure language of nature. The ancient rituals celebrated the art of the essence. They were able to concentrate into mantras, dances, sequences of sounds and rhythms the energy who passed through human beings and kept them alive. These rituals renewed the connection between human beings and the forces they were made of.. French, Italian, English, Spanish, Latin and other languages are not always pronounced in the right way, they become a sort of clay that we like shaping.


Ataraxia has always been a kind of ‘total artistic concept’, where music only seems to be an element next to poetry, imagery, theatre etc. Tell us a bit more about this approach and eventually some referential artists?

We love poetry most of all. We are at ease when we adapt poetry to music. Sappho and several other Greek poets of the classic age were deeply inspired by nature. Their poetry was full of the visual and aural suggestions of the natural elements. They didn’t write complex, long verses to portray their feelings, they simply observed and lived the nature changes, the different lights of the day, the tides, the moon phases, the seasons of birth, death and rest and translated them into words. Every word embodied a color, a surface, a perfume. Their poetry was written to be accompanied by the lyre. It was bright, sensual, absolutely musical.

Other great influences are the landscapes, especially those places that are full of energy. Other forms of art inspire our music directly (theatre, painting, photography, mask craft) and we have always collaborated with artists who physically or with their art took part in our performances and albums. They inspire us and we inspire them. It is a circular and creative process. Some names: Andrea Chiesi, Angelo Zanella, Livio Bedeschi, Norma Gombok, Mick Mercer. From the past we have been mainly inspired by Waterhouse.


“Deep Blue Firmament” is your 25th full length album in history. Does it have a particular meaning and how would you analyse your evolution as band/musicians throughout the years and what do you expect from the future?

In November 2015, we entered our recording studio without any idea, any melody in mind, completely empty as channels ready to be filled by grace. This is what we need every time we appraoch a new album, in order to start being free you need to be empty and to purify all what has become a limiting barrier, the original innocence has to be born again this means to go back to a holy source.

The meaning of “Deep Blue Firmament” is that in the darkest nights of life, obscurity sharpens our subtle sight so we are able to see the firmament more clearly, slivers of insight make us lift our eyes up to the deep blue sky opening our heart and mind to an interior teaching or revelation. Our artistic evolution has been natural, felt and we have always lived in a state of awareness.

About the future, a new album will be released in 2018, there our very first demo tapes, “Prophetia” and “Arazzi”, will be finally released on CD format. We also go on with our live activities bringing “Deep Blue Firmament” performance where we are called.

Other reviews from ATARAXIA
ATARAXIA • We all are one and separation causes blindness and had a destructive power.