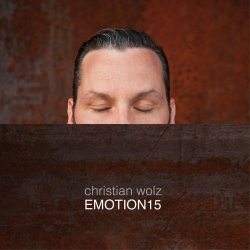 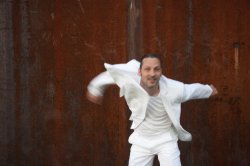 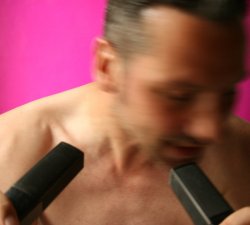 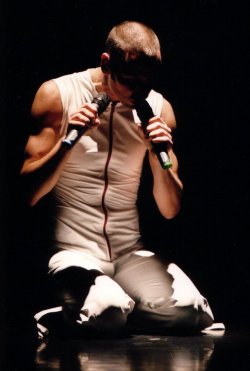 On the 21st of September 2011 the German vocalartist Christian Wolz will introduce his new album “Emotion15” to the public with a première at Berlin. His last album was released in 2007. We wanted to know more about this new project, his vocalart, workshops and relationship with contemporary dance.

How would you discribe vocalart?

Vocalart is a special way of working with the voice. It's a combination of singing and producing sounds with it. It’s using the voice as an instrument.

It could be done in a natural and artificial way or in combination of both. You can produce so many different sounds with it so that you don’t hear a human voice anymore. There’s a big connection to bodywork as well.

It's been four years since your last album. Why did it took so long to produce a new one?

During that period I did work on music or projects where music was involved. I collaborated with dance companies and was touring through Europe and New Zealand. There was no time to produce a new album. I did some improvisation concerts to sample material which will be part of future projects. Last year I had the need to produce a solo project without doing compromises with other artists. It was time for something of my own.

What has been the driving force, the impulse behind “Emotion15”?

“Emotion15” is a result from my inner self. I started last year with this project and it was just coming to me! I always worked with emotions and it was clear for me that I had to deal with this specific subject one day. On a personal level the last year was very intense and this album made it possible to work and experience with those personal emotions. Although it started with improvisation the work is very composed and structured.

I also wanted to have a scientific look on it. There’s a pattern in our brain which works with emotions like fear, rage, happiness etc. Science found out how that is working. In music we don’t have simular results but I think it’s also possible to find them. For example: we can diversify harmonic and disharmonic sounds. I find the combination of science and ourselves, as human beings, interesting for my work.

There are 15 tracks on the new release. Does every track symbolise a different, specific emotion as the title suggests?

I have put 15 parts in one work, but you don’t have 15 different titles like in a normal album. It must be seen as one piece with 15 sequences which are all connected to each other. Some of them have a very clear meaning, some are ambivalent. When all is put together you’ll go on a journey and experience new things with emotions you already knew. This is caused through association and connecting these emotions.

The première of 'Emotion15' will take place at Villa Elisabeth in Berlin on the 21st of September. What can be expected of this concert?

This villa is an old building in Berlin Mitte. The performance will be in a ballroom, filled with galleries. It has a very special charm. There will be a simple setting: just lights, two microphones (without stands) and me, in a white suit. Very clear and simple with enough space for emotions and accociations.

You give workshops for vocal training. How does is work? Does it inspire you?

I give workshops, lessons and give courses for vocal training. It's very enriching because I have so many different students: from classical singers to non-singers. Things always start with finding your own voice. Next to those lessons I also teach a lot of improvisation. By doing that I get influenced for the work with my own voice and learn about that. Although this has not really influenced me in a musical way. I just like the combination of teaching togehter with my passion of working with the voice.

Earlier this year your music could be heard during the dance performance "The Bog Forest". What's your relationship with contemporary dance?

I’ve not only made the music for this piece but am a member of the dance company as well. I sing, do vocalart and have a roll to play. When I'm working for a dance piece I always compose new material for it. I'm working with dance now for more than 13 years. It's very familiar for me. On the other hand it’s a completely different way to work with music. I like contemporary dance because I like the bodywork and also because they don't use classical text. It's expressional work which is simular to my own art. Although the way dancers and musicians work is very different.

For most people vocalart is not really accessible or even ‘uneasy listening’. Do you ever consider making changes to your music to reach a larger audience or can there be no compromises for achieving that?

For me, in a personal way, it's not really possible to make compromises. I don't want to feed the people with that, what they expect or want to have. I am an artist so I have the freedom and also the assignment to tell about that which I see and feel around me in our world. This is most important for me in my art, and of course I wish that a lot of people listen to me and think about it.

What kind of project do you still want to work out in the future?

I have no concrete ideas. It will come to me, like it always does. We will see what happens in the future. There are so many things which I'm thinking about, but it has to become clear for myself to deal with. When that happens I will let you know about it!

I‘ll keep that in mind. Thank you for the interview.

PSYCHE • Computers are great for looping, and editing, but nothing replaces playing by hand, and writing what you're feeling.
POUPPÉE FABRIKK • Hail Jägermeister!
SEVERED HEADS • Being in a band is a fine thing for the young, but stifling once you’re old
UNITARY • I don’t believe in limiting myself strictly to one concept.
SOL 19 • SOL19 is able to move and touch some people who in their turn respond great, so I’m happy about that.
XMH • XMH is primarily about the music, not about lecturing people.
TRUMMERFRAU • Man, we live in 2011, we are Generation iPod! We can discover tons of music and mix it all into our personal usage.
NINE CIRCLES • People did not understand us and were thinking that we were very strange people...
ATTRITION • We will be playing in Bredene on Friday September 30th!!! So the timing for this interview is pretty good …
PARADE GROUND • Suicide is the only truth , space changes form , it’s the choreography of chaos.