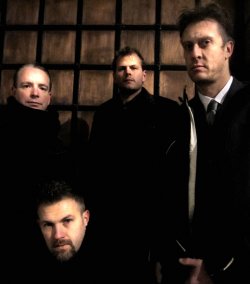 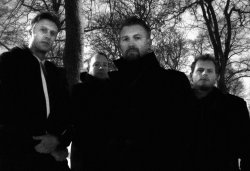 One of the guests on this years BIMfest in December are Swedish EBM outfit Pouppée Fabrikk. Starting out in the early 90’s as a powerful version of DAF meets Nitzer Ebb, Pouppée Fabrikk released albums such as 'Rage' and 'Portent', both to be considered classics in their genre. Later on mr guitar is introduced resulting in a few crossover albums. Now after 7 years of silence they are back, with a new 'old school' album in the pipeline, and are ready to blow you away on stage. We caught up with keyboard player Leif Holm for a little chat.

I always loved the band name Pouppée Fabrikk, but has it an actually meaning?

The name Pouppée Fabrikk is from 1987 and has no meaning at all, it's only our band name. The way it's spelled now is one of our friends fault. The orginal name was Poupé Fabrikk , a French (Poupé) , Norwegian (Fabrikk) combination. Andreas made our first posters in 1988 and spelled the name Pouppée Fabrikk and we liked it and since then we've spelled it that way.

After a break of 7 years you decided that it was time for a comeback. What triggered that decision?

Henrik (Björkk), Jouni (Ollila), Jonas (Aneheim) and myself were at the same wedding and we were talking about doing one last round with Pouppée Fabrikk and so we did. Jouni had too many projects going on and did not join us, so Christiaan R from CAP replaced him.

You already played 2 gigs, first one on the Bodyfest in Sweden and now just recently at the Wave Gothic Treffen in Germany. How did it go?

Actually we played already  3 gig's so far, we also did a small club gig in Stockholm. But all concerts were so great. I never thought that so many people would come to see us. We were so happy that people wanted to hear our old songs.

In December you will finally enter a Belgian stage as one of the guests at the BIMfest. What can we expect?

Some old songs, some new songs, maybe some CAP songs, we're not sure yet, but I think you will like it. It's gonna be our first gig in Belgium, so we might do something special for you.

Who else will be on stage with you and Henrik?

Hopefully all members + our new mascot: Stefan from  Spetsnaz.

A new album is on the way, which will be released on the Belgian label Alfa Matrix. I already heard the track Symptom, which sounded very promising, I have to say. Can you tell us a bit more about the upcoming release? When will it be released?

This album takes longer to record than we expected. I have really high standards when I create songs and they must be great before I pass them on to Henrik. It sometimes takes time to get things right. It should be released before the BIMfest.

I think it will sound a bit old school.

I write music together with Christiaan and then it goes to Henrik for feedback.

D.A.F. and Nitzer Ebb were big influences for you guys, but are there other bands who were really important for you as well? Bands that people maybe don't really expect?

Well there was a Swedish deathmetal band called Entombed, who gave us our guitar influences.

Your first album 'Rage' was released more than 20 years ago. Was it more fun to release records in those days or do you prefer the technology you can use in 2011?

When we released Rage we went to a studio and that was fun for me. Cause we could play with all the different gear that was there, hanging around, mixing stuff and that was always fun. These days I sit in my homestudio and do everything there, which is fun too, but it was better in the old days.

After 'Rage' and 'Portent', you released a few more guitar oriented albums, such as 'We Have To Come To Drop Bombs' and 'Your Pain – Our Gain', are you still behind those releases, cause I remember lots of fans weren’t really amused with that direction?

For us it was a normal evolution at that time. I personaly wasn't so much into guitars, so I started CAP in 1994 to play the stuff I liked.When we played in Germany in those days, there were always fans coming up to us to ask why we used so many guitars on the new tracks.

You both are in several sideprojects, such as Mz 412 and CAP to name the most well known ones. Can we expect more releases from those projects as well, or are they on hold now that Pouppée Fabrikk is back?

I know Henrik is very busy with several things, releasing many of his projects. I am taking it easy with CAP, there are some new CAP tracks, but only as demos. Pouppée Fabrikk is taking all my time now.

On nearly every Pouppée Fabrikk release you can find the “Hail Jägermeister” quote. What’s the story behind that?

Ha ha ha, the short story. Well we used to drink A LOT OF Jäger and we had a DAFish band called PAF (Pouppée Ater Koma Freundschaft). And to be a member of that band you had to drink a bottle of Jäger, 70cl. We had a special Jäger position to drink it and it was totaly crazy. On one party we had some record drinking of 12 bottles of Jäger. As for now we cant drink Jäger anymore, I get so sick of it. Jäger and redbull, maybe.

What's the weirdest record in your collection?

I dont have that many records left. I sold them all to Jouni. But some are special to me and are still in my collection. I have a record of Belgian band Coyote And The Lost Dakotas for instance and one of Deathstars which is maybe a bit odd for some people.

We don't know what will happen after this record, there are no plans for the moment.

Thank you for answering the questions, we look forward to seeing you live at the BIMfest in Antwerp!

SEVERED HEADS • Being in a band is a fine thing for the young, but stifling once you’re old
UNITARY • I don’t believe in limiting myself strictly to one concept.
SOL 19 • SOL19 is able to move and touch some people who in their turn respond great, so I’m happy about that.
XMH • XMH is primarily about the music, not about lecturing people.
TRUMMERFRAU • Man, we live in 2011, we are Generation iPod! We can discover tons of music and mix it all into our personal usage.
NINE CIRCLES • People did not understand us and were thinking that we were very strange people...
ATTRITION • We will be playing in Bredene on Friday September 30th!!! So the timing for this interview is pretty good …
PARADE GROUND • Suicide is the only truth , space changes form , it’s the choreography of chaos.
LEAETHER STRIP • For me it has always been about the music and the lyrics. All I want is for people to get something out of what I have to offer.
LENTO • We really don't care a lot about music business. We just try to make our way and be sincere in what we do.