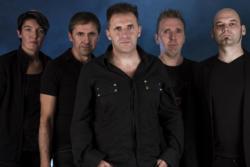 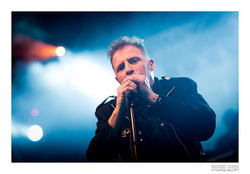 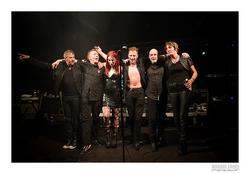 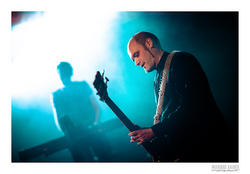 You can create music that’s inspired by someone else, or you can create something that inspires others. I think the last is very important.

On Monday eve, 1st December, I headed toward Ostend for an interview with Der Klinke in their home studio on the occasion of their latest excellent release The Gathering of Hopes. I was curious and a bit nervous for interviewing them, but it turned out to be a very relaxed and smooth conversation.

What is the meaning behind the title? What interpretation can we find in it?
Chesko & Marco: The title of the album was actually already determined for some time, since the track The Gathering of Hopes was already created. In short it stands for children, being the symbol of our future. On the cover of the album you can therefore notice the children of all band members. This actually became the main thought behind the development of the album. In every album we try to work with one course of thoughts, so that eventually all tracks combined manifest in one story. The recording of this ‘story’, as well as the mastering of the tracks takes place in this very studio.

The artwork of this album is quite different compared to the one of The Doll. Less dark, while still containing the essence of the album’s context.
Sam: We’re very fortunate to have Heidi in our midst. She’s a professional photographer, so we have full access to the photo studio she owns in Bredene. This way we actually have someone in the group who is capable of creating all the artwork. And more importantly, she has loads of talent and the right material to develop some very professional and breathtaking end results. Furthermore it’s something she would like to do in future for other bands as well.

The songs of Der Klinke, how are they created?
Chesko: Mostly I have a general idea about a song, or something that I already made in rough lines. Afterwards the group works out the idea in the studio. Mostly the drums, than the bass and guitar are recorded first and meanwhile the keyboards are further refined. It’s a whole process before a song is finished, because the songs continue to evolve during rehearsals and live shows. The regrettable thing in this scene is that very often pre-recorded music is implemented on the stage. Sometimes this happens out of necessity (being short on resources) or just because they feel the pressure of performing a perfect live show, without mistakes. Today, with smartphones, your performance is easily uploaded to any social medium, as well as your mistakes. Personally, we don’t make a big deal of it. We use some backtracks of our own, but if they should somehow fail to play, it won’t turn out into a disaster because almost everything is played live.
Sam: We put a high value on playing live, because it’s particularly that part that makes it fun for us. Even with recording videos having fun is the priority.

You acquired a new keyboard player in your band?
Chesko: Yes, this way we can achieve more live, as stated before. “Lollirot” brings an extra dose of positive energy in the group and because of her we are also able to bring a stronger live performance. Beside that we also value the presence of our sound engineer Didier Moens at our shows. He manages the sound and makes sure that every show we sound spot on. Naturally this is a very important aspect, but not always that easy because of the complexity of our music. Fortunately Didier is very experienced in his profession.

You have already worked with the singer of The Bollock Brothers. Is there someone else you would like to work with as well?
(They give each other meaningful looks and start to laugh) At this moment we can’t really tell a lot about this subject, but you can be assured that there is an exciting future ahead of us. We’ll collaborate with someone with a high national status, of which people hopefully will be amazed of. But all details will be revealed in 2015.
Chesko: Echozone extended our contract with 6 years, so we can completely do our own thing. For us it’s a sign of respect and trust. We’re are really pleased with that and with fact that a complete team of our record label in Germany came over to our release concert to film everything professionally. On the subject of the collaboration with the singer of The Bollock Brothers, this happened because in the past I went on tour with them as keyboard player.

Now maybe something about the tracks on the album… We are here is a strong opener: crafty and direct.
Marco: The track is somewhat a statement.
Chesko: Particularly for the people who thought we would never make it. With this song we want to say: “Yeah! We’re still here and this is who we are! And we’re damn proud of it!”

The Doll is clearly a live favourite and on the album as well.
Hazy: Indeed, the track has evolved a lot in the meantime. It’s been rerecorded and this way it makes a better part of the album.
Chesko: First of all The Doll begun as an instrumental track that, as a DJ, I played in setlists. People came to me and told me they thought the song rocked. After some time we started to record a video for it. We collected some old attributes, among them a doll, a pram and such things (mutual laughter).
Marco: Because of a misunderstanding the camera was still filming while we were talking amongst ourselves.
Chesko: And on that day the text of The Doll was created, as it was nonexistent before. So all very by chance actually. We’ve put the track on an EP, with some extended mixes, like back in the eighties.

Night Air is a cover of the eponymous song by Jamie Woon. I think it’s a great achievement that it’s not an exact copy of the song, but really molded into a Der Klinke track.
Marco: Yes, it has been our intention when Chesko told us the idea. We wanted to create a new version that somehow would give more value to the song and actually sounded just like us.
Chesko: We are also very proud to officially have received the permission of Jamie Woon after he heard our version.
Sam: We think the track has a lot of potential. It would, for example, fit perfectly in a show as Duyster on radio station Studio Brussel.

The Facts of Life has very strong lyrics I think.
Chesko: I like to keep most of the lyrics as universal as possible. This way a lot of people can identify with them. This text is just the same, it’s about a soldier during the war. It was written last year, even before I knew there would be a hype around WO I. But nevertheless the lyrics are written so that there are multiple ways of interpreting them.

Follow me has a really fun, almost ‘disco’ bass in the intro.
Sam: Actually, I think that as a band we always had some funk influences. Something rather unique in the goth scene. It’s like goth meets funk.

Somehow I think you partially transcend the goth scene.
Chesko: It’s a fact that we have our roots in the 80’s, but we have a very elaborate taste and that influences our music as well.
Marco: The dark touch remains in our music, but we think we are nevertheless more than that.
Sam: On the occasion of our release concert, I was asked the same question: “Won’t it be too black, your performance?” But once they hear us, they are forced to review their opinion.
Marco: We’re not that easily put into one category like some other bands, for example at Amphi-festival, the bands that I see and that have success, play a particular type of electro like Project Pitchfork, VNV Nation, etc… Beside that, there are also the things we like to call metalschlagers, like Umbra Et Imago, Unheilig and Lacrimosa. And we fit just right in between.
Sam: This actually makes it harder for us, but we choose to do our own thing and achieve status this way.
Chesko: You can create music that is inspired by someone else, or you can create something that inspires others. I think the latter is very important.

What are your favorite songs so far?
Chesko: The Doll and “We are Here
Sam: Phew, hard choice, I like all songs we made, but the title track still gives me goose bumps.
Heidi: Las Fabricas, I really like the aura in that track.
Marco: Last Moments
Hazy: We Are Here and In Flames

Finally, what do you hope to achieve with this album and this group?
Marco: That we can perform at some nice concerts and hopefully abroad too (agreeing nods from the others).
Chesko: Every member plays his/her own part in the group. We have people who like to work and develop the songs, people who love to perform, others who like to create the artwork. We are a team, we hope we can continue like this.

Then, the only thing left for me is to thank you for this interesting conversation.

Der Klinke will play Friday, 19th of December on BIM-fest in Antwerp.

BACIO DI TOSCA • Choosing a lyric often happens when I read old poetry and find a poem that deeply touches me.
ELUVEITIE • I just wanted to do what I love, that's why I formed Eluveitie 12 years ago!
ATE DE JONG (DIRECTOR) • Most students were much smarter than me, and they had much more talent, but they had fear of failure.
PIETER VAN HEES (DIRECTOR) • Perhaps it is true that the further Wallony and Flanders grow from each other, the more exotic and exciting it becomes. That never hurts in a relationship.
SEX GANG CHILDREN • Your analogy of squatting as 'living in the gutter' is way off the mark.
2ND CIVILIZATION • I feel with this album something is starting to move and if promoters are willing to book a good live band, they know where to find us.
RASTABAN • We create, record and produce our records ourselves, and we want to keep this freedom!
JONAS GOVAERTS (DIRECTOR) • The question is not, 'What can't you do?', it is 'What hasn't been done yet?', and also, 'Why isn't Emma Stone answering my calls?'
JOHN CARPENTER • I’m encouraged for the future.
VANNESSA VASQUEZ (ACTRESS) • I am a very free spirit, I don’t know what lies ahead but I trust that they universe has great things in store.

Other reviews from DER KLINKE
DER KLINKE • I think if our label would decide to release 'a best of' say in 2020, 60% would still be tracks from our new album
DER KLINKE • I believe we are good in our own way, and we are still growing and improving.
DER KLINKE • Today there are more possibilities and ways to make music, but at the same time less freedom as everything’s been done before.