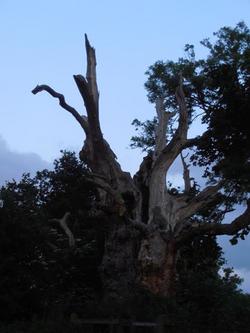 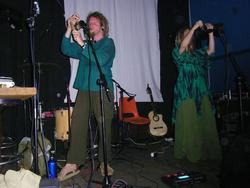 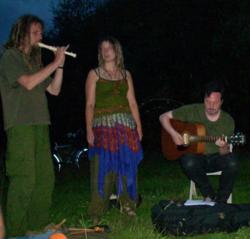 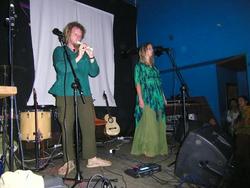 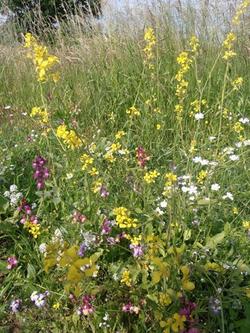 The inspiration to write music comes completely from spending a lot of time within Mother Nature in her various dimensions.

Upon hearing the name ‘Kinderen van Moeder Aarde’ - Children of Mother Earth - you may be thinking primarily of vegan hippies bringing paeans to nature. And oh surprise, that’s exactly what this band consists of. Kinderen van Moeder Aarde came out of the brain of Bart Piette - hopefully known as the mastermind behind Dead Man's Hill, Experiments in Darkness and many other projects - and his life partner Els. Since they will play at the tenth Dark Entries Night on January 9, we thought it the appropriate time to ask them some questions about their inspiration and their goals.

Hi Bart and Els. Kinderen van Moeder Aarde is a relatively recent project of yours. I heard about it for the first time in September 2012. Tell me how the project originated…

Bart: Well, it's always a bit the same story. After another long time spent in the forest, the inspiration - the whisperings of Mother Nature - came again. I heard lyrics and melodies in my head singing about the beauty of Mother Earth, the plants and the trees, the animals, the subtle dimensions that are similar to ours. After a lot of thinking about how to create this music, I told Els about the idea and we decided to work together, and we started thinking about how we could translate this into music.

Els: The idea of making music together was already playing in our head for a while. In the summer of 2012, Bart began to write the first songs for Kinderen van Moeder Aarde, and the concept immediatly had the right feeling.

If I google ‘Kinderen van Moeder Aarde’, I find an eponymous novel by Thea Beckman. Is this where you got the name for the project from? If not, what’s the source of the name?

Bart: No, not really. I never even read the book. The name actually comes from the simple recognition that we are all children of Mother Earth, and must see her, treat her and care for her as a mother. Mother Earth and Father Sun feed us, they make our lives possible.

Els: I've never read the book either, so the band has nothing to do with the book. As Bart said, it is indeed about the link with the Earth.

Bart: Absolutely. The inspiration to write this music comes completely from spending a lot of time in Mother Nature in her various dimensions. We are part of her, so the more we return to her, the more we know true happiness and feel the true commitment that she has to offer us. That’s what life is about.

Els: Our music is an expression of our animistic worldview and way of thinking. The closeness to nature is everywhere. Our Pagan worldview has a great influence on our music. Songs like ‘Holly King’ and ‘King of the Oaks’ have clearly Pagan themes. Our philosophy, which also stand out clearly in our music, is also reflected in other things musically. For example, we only use vegan drums on ethical grounds.

The first CD is ready to be issued. What can we expect of it and what are your specific outlooks with regard to the issue?

Bart: It is ready indeed, and we are currently looking for a record label. This CD connects songs on both the light and the dark side of Nature. Guitar and flute are almost always present in these songs, supported by dark experimental sound collages of natural sounds that represent the different layers in nature. If you want to put a name on it, then let's call it shamanistic ritual folk.

Listening to your songs on Soundcloud, I discovered a great diversity. On the one hand you have the previously mentioned folk songs, and on the other hand more ritualistic, meditative pieces. I understand that the second category will be prominent on a CD that will have ‘sources’ as a theme. Can you tell us more about it already?

Bart: That's right. The work of Kinderen van Moeder Aarde splits in two directions. On the one hand more folk-like music, on the other hand ritual ambient with a deep sacral element. This work will focus on some of the sacred sources in Europe. We have spent time in these places, sang, listened and received there. The four songs that will be on this CD are not created to be musical gems, but rather to drag the listener fully into the depths where these sources spring from, and to transpose the story of these holy places as accurately as possible into sound. The music acts more like a gate through which the listener can go inside, to enter the paths of subtle realities.

Els: The compositions on the sources are a way to pay a musical homage to the places they describe. It is a kind of music that converts the energy that we experienced in these special places. The tracks convey that feeling. These songs sound and indeed feel very different than our more folky songs. Hence, we decided to put them on another CD. This music is better suited to meditation, trance travel or listening quietly. The atmosphere is different from the other songs, and the songs are much longer too. As Bart said, you can actually see these tracks as a kind of musical journeys to the sources.

You also have ideas to make musical hymns for plants. But that is still something for the future...

Bart: Indeed. We have already written a few songs for that project, but it will take time to get this whole concept going. We need to think deeply about the hymn, because it must be worthy of the plant.

Els: Nature in its totality is the subject of our music. Bart came up with the idea of writing songs dedicated to certain plants and trees, with lyrics and melodies that reflect the energy, but also the folklore and mythology of the respective plant. The plant kingdom can teach us so much. It would be nice for us to transpose a piece of it into music.

Bart, we also know you as the man behind Dead Man's Hill. In a previous interview, you told me that you had no more inspiration for this project and that it would merge with The Earth King, an evolution for which you took a first step in 2013 with the CD Cycling Between Sun and Moon. But you did put two new songs of Dead Man's Hill online lately. Did your plans change?

Bart: Yes, the inspiration is less predictable than I originally thought. I now have eight new compositions that clearly fall under Dead Man's Hill, while The Earth King came to a standstill. I am currently actively working on a new album, so there will be new work of Dead Man's Hill coming up soon.

On January 9 you will play together with Empusae in the Kinky Star for the tenth edition of the Dark Entries Night. What can we expect?

Bart: We will mainly bring more folk-inspired songs. We are also happy that for our third live appearance, we can introduce our new live guitarist to the general public.

Els: We can not bring the tracks about the sources live currently. They lend themselves to a different kind of place than live concerts. Our set will indeed consist primarily of our folk songs, but also includes ritualistic elements. This is our second amplified concert and the first time we will share the stage with our live guitarist Xavier. It will also be a bit of a surprise for us. In any case, we hope to bring nice energy and a beautiful musical event.

Thanks for this interview. Do you want to add one last word?

Bart: Thank you! The people who are interested in our music can visit www.facebook.com/kinderenvanmoederaarde. Links can be found there to music and videos of our project.

SHE PAST AWAY • And, finally, at the end of the day, the night emerged…
EMPUSAE • I can just completely let go when I'm alone with my muses and my instruments.
BORGHESIA • Today we live in a smart world where every kid has studio in his smart phone. More than 90% of top chart music is electronic. But there is still a place for innovative music.
TYSKE LUDDER • Our roots are more in the 70/80th wave and goth music than in the Oldschool Electro-classics.
COCKSURE • I would like to think people see the humour in what I write
CUÉLEBRE • We are very excited about Trolls et Légendes and the people we will meet!
PER-INGVAR TOMREN (DIRECTOR) • Much sicker stuff could have tumbled out of my head, but I wanted to make something that I could show my grandparents without being embarrassed.
OSLAVA • Assertive music is my thing
DER KLINKE • You can create music that’s inspired by someone else, or you can create something that inspires others. I think the last is very important.
BACIO DI TOSCA • Choosing a lyric often happens when I read old poetry and find a poem that deeply touches me.