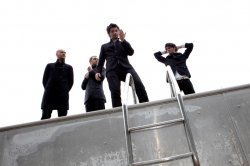 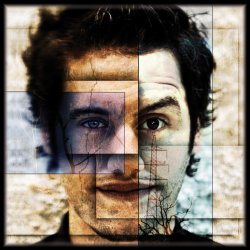 Our dream is to see our music growing and get listened by more and more people.

There’s a new magnificent band born in Italy. Their name is Martin Kleid and they play gorgeous postpunk which is added with a electronic touch. The music can be best compared to The Sound (just listen to A Man With A Code Gun) or The Exploding Boy even if the band doesn’t know who they are. But enough pigeonholing, they just released a splendid mini-album on Alice In… and it’s a tip for all postpunk-devotees.

Sorry to ask this, but I think the name is kind of strange….so please explain.
Honestly it was just a case. We wanted to find a name of a fake person that could combine the four of us into a single person. We were just talking trying to associate two words and Martin Kleid came out. We found the word Kleid in a German vocabulary.

I guess you can be categorized as post-punk. I know a lot of excellent Italian bands but not one of them is making post-punk.
Well, maybe there is a little bit of post punk, synth pop, new wave, indie rock, pop.

You’re signed on Alice In… which is a bit of a gothlabel. How did you got in touch with them?
We sent an e-mail presenting our project and the owner of the label, Frank D'Angelo liked it. Then we stayed in contact for three or four months before deciding to sign.

With being signed by them, there’s a slight change that you’ll become more popular in Germany than in Italy, not? Look what happened to The Exploding Boy for instance.
Yes, you are right… maybe we will become most popular in Germany than in Italy and we honestly hope so. In Italy there is a sort of racism against bands playing this kind of music in English. If you are a British or American based band you have more possibilities… Promo and booking agencies are more open to them then to Italian bands. We honestly don't know who The Exploding Boy are…we will listen to them (starts laughing).

Your first album is a mini album. Why not a full one?
We recorded 8lights in September 2011 and those 7 tracks were the most representative at that moment. 8lights is rock, romantic, melancholy and a little dance, this is what Martin Kleid want to be! That's the reason why we did not record more songs! But we have a lot of new songs for the next album though!

I thought it was a genius touch to add your postpunk-sound with some electronics. This makes you quite original, not?
We were closer to a rock-new wave sound in the beginning, then we started to add some electronics on our songs and we suddenly loved it… I don t know if it's original or not, it's just what we like to do and the music we love to play. I cannot imagine now our music without electronics

Francesco: My favorite record is Facelift by Alice in Chains, there is not a specific reason why I like it…it's just a perfect record.

Michele: My favorite record is The Unforgettable Fire by U2. The compositions, the songs, the way they were made is so original

Sasha: My fave album is Ok Computer by Radiohead. It really shocked me when I listened to it the first time. I had never heard anything like that at that moment, it changed my life.

Michele: Beyoncé, have you ever seen the Alberto Sordi-movie Strange occasions?

Claudio: My director at work. It could be a good occasion to kill him

Sasha: I wouldn’t mind to be in an elevator for 8 hours with Bono…and play guitar for him

A special message for the Peek-A-Boo readers could be?
After a pint oh Blanche de Namur and a Leffe the best thing to do is to listen to Martin Kleid's 8lights (laughs).

TERROR BIRD • Despite what anyone says, Siouxie Sioux is not an influence! I swear!
PARADE GROUND • We’re the musicians of tomorrow. Our course is a race for eternity.
VV303 • Musica delenit bestiam feram!
DREAM AFFAIR • We are an amalgamation of things from the past, present, and future.
NORTHERN SADNESS • People don’t simply buy something because the dj says it’s great and that’s a good thing
JOHAN TROCH • The mood of the day, or music I listened at lately, can inspire me.
NGLOBE • I discovered that I didn't need to invest in expensive equipment anymore but could do everything and more with 1 computer program.
SUICIDE COMMANDO • The funny thing is that many other Belgian bands get tons of airplay on national radio, but don’t even sell half of what Suicide Commando is selling.
JOHN 3:16 • There is more darkness in the Bible than anywhere else in literature.
DER KLINKE • I believe we are good in our own way, and we are still growing and improving.