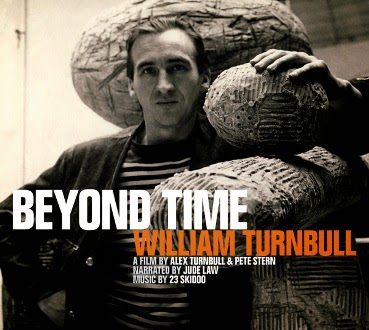 William 'Bill' Turnbull was a pre-war art student turned Scottish World War 2 fighter-pilot turned post-war art-student turned influential sculptor, whose creations were born partly out of the depression of '30s Glasgow and Dundee where he studied and from his wartime experiences.

His unique style married robust materials such as bronze, steel, perspex and glass with surrealism and textures, somewhat abstract but rarely dull. Turnbull was part of a younger breed of sculptors who were slowly beginning to break down the establishment of the art-world, something that his sons Alex and Johnny have continued to do with their own art project, 23 Skidoo.

This release sees two generations of Turnbulls conjoined for the first time. The Beyond Time DVD studies Bill's life and work, ably soundtracked by his son's 23 Skidoo project throughout. The artistic correlation between both father and son is apparent as the documentary rolls on - Bill Turnbull's work was never far from the left-field, while Alex and Johnny mined a similar seam with 23 Skidoo in the '80s heyday of early Fetish and Illuminated imprints.

Their father's marriage to Singaporean artist Kim Lim provided mutual inspiration between the artists and it could be argued that his later far-Eastern heritage has continued to steer 23 Skidoo towards the gamelan, cut-and-paste and spatial end of '80s post-punk, brit-funk.

Regardless of whether you find Turnbull's eye-catching creations absorbing or not, you can't ignore the film's resonating soundtrack. Written by 23 Skidoo, Beyond Time's unobtrusive accompaniment is comprised of reworked and new material including new mixes from the band's self-titled 2000 long-player, as well as a revisit of Urban Gamelan. Pick of the bunch is the new and beautiful cyclical Calypso, a remarkable eight-minute masterpiece that sits somewhere between Reich, Roedelius and Hillage, a musical sculpture that hypnotically concludes with brain-rattling downbeats and distorted riffs.