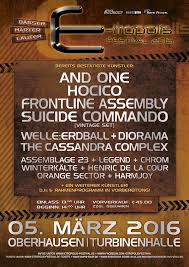 For the third time, the E-Tropolisfestival took place. since it was moved from Berlin to the Ruhr area in 2014, it has become more and more popular every year. The meeting place is still the Turbinenhalle in Oberhausen, an old power station for the steel industry until 1980, perhaps the perfect location for a festival with EBM, electro and industrial sounds.

The number of visitors of 2015 (4000) was equaled this year. The renovated rooms make everything more enjoyable : a new stage, a balcony and bars. This year more and more Belgian and Dutch visitors found their way to this indoor festival.

This year’s lineup was again very diverse and promising, and of course a real must for all lovers of the dark electronic genre. Due to the rain, my scheduled two-hour ride was a bit longer, and so I missed a few bands that played at the start of the festival. But no worries, there were plenty of brilliant gigs planned during the afternoon and the evening.

The first complete gig I saw was The Cassandra Complex. Rodney Orpheus and Paul Dillon founded the band in 1980 and scored a few hits in the indie scene. After many ups and downs, the band members wanted to prove that they are still alive. And they are, the oldies of the festival could compete with the youngsters, and the hits that were composed 25 years ago were highly appreciated. Rodney has a very good voice and songs like Nightfall and Ground were performed with some Irish flair, nice to see them again. (85/100)

Winterkälte was one of the few pure industrial bands at the festival. For some mainstream concertgoers this was a little too much, but the real fans of the genre stood in the first row and made ​​a party. You love it or you leave after a few songs. Personally, I belong to the first group, and I floated away on a sea of ​​unadulterated rhythm 'n noise. Udo Wiesmann, the big boss of the Hands-label, founded Winterkälte in 1991, and along with drummer Eric De Vries, he played the set as a fighter pilot on speed. The energetic sound of explosions and harsh electronics was like a tsunami in your head, Winterkälte remains one of the best and hardest industrial acts on our planet. (95/100)

A small minus on this almost flawlessly organized festival was the fact that some acts began when the others were still on stage That caused a chaotic situation. So, when I entered the hall in which Welle:Erdball was playing, the band wa already on stage for a while. This German band was founded in 1990 and makes minimal electro. There is always a cheerful and childish atmosphere when I see this band. Despite their adoration for the serious work of pioneers such as Kraftwerk, the lyrics are poignant. They just make fresh and simple electro pop tunes, and this was appreciated by the public that loudly sung the lyrics. The gig reached a climax when a dozen large balloons were dropped on the audience during Schweben,Fliegen Und Fallen. (80/100)

Front Line Assembly was founded in 1986, when Bill Leeb left Skinny Puppy. The name was inspired by the Belgian EBM pioneers of Front 242. The band nearly died several times, but always managed to recover by releasing surprisingly good records. I was obviously not the only one with high expectations as it was difficult to find a place in the first rows. There was not a laptop in sight, so this was a real old school set with drums and synths that enriched the EBM sound. They also used a large video screen that accentuated the dark and hard beats. During three decades Front Line Assembly showed us its black electronic side and influenced many young bands. This set was exactly as we expected, no nonsense or extremities, just a very good gig of this still very productive and powerful underground band. (85/100)

Diorama was one of the headliners at the festival, because these Germans are very popular in their own country. When I entered the hall, the atmosphere was promising, and this synth pop band was a relief after the harder work by others. Two members of Diorama also play in Diary Of Dreams and Frozen Plasma: Torben Wendt and Felix Marc. Musically, the set worked perfect, and Torben is always present on stage. His dance steps and musical commitment were greatly appreciated, especially by the many female fans. The set consisted of the greatest hits and especially during the club killer Synthesize Me the audience went nuts. Even though I saw this band several times, I was enchanted by the smooth electronic dark wave that was presented with great energy and perfection. The danceable beats and the melodies did the rest. I must admit that this was a positive surprise on the festival, and I look forward to hear the new album, which is expected in September. (100/100)

The best performance was the opening act of the evening: Hocico. Erk sang on a large video screen, while on stage two latex-clad angels added more strength to the beats with heavy drums, simply delicious. The latest album Ofensor was in my personal top 10 in 2015, so my expectations were high. Erk Aicrag and Rasco Agroyam made a party, and that resulted in a jumping and dancing audience. Erk didn’t stop moving and he caused quite some hilarity among the photographers. The hyperactive and pounding rhythms were fully appreciated. The brutal and harsh electronics make this band one of the top acts in the harsh electro/aggrotech scene. The explicit images on the video screen gave this performance an extra boost, and songs like Sex Sick and Bite Me caused violent moments in the first rows. It was really admirable to see what an energy Erk has on stage. Perhaps Hocico should add some variety to the songs, as for some spectators it may sound monotonous after a while. Anyway, the set was a perfect mix of older and newer material, but without a climax. This had everything to do with the fact that Suicide Commando had started playing in the other hall. (90/100)

A band I really looked forward to, was Suicide Commando. I had the luck to see this vintage set before, and I was euphoric about it, and so I thought this gig would be one of the highlights of this festival. Some may not know it, but the first tape of Johan Van Roy was made in 1988, more than twenty-five years ago. Johan realized that there are actually two generations who are familiar with his music. Because he wanted to separate the older and the new songs, he launched these vintage shows. No Mario on stage, and Torben was supported by Gert Haelevoet (Frames A Second). Suicide Commando was a nostalgic electro bomb, and the lyrics of the club hits Necrophilia and See You In Hell were loudly screamed by the public. It was wonderful to hear these old tracks. Johan slightly modified the set list by drawing the line until Construct-Destruct of 1998. It was extraordinary to see how a packed hall enjoyed the music of this Flemish pioneer and respects his older work. Some young colts were hopelessly waiting for Attention Whore or Bind Torture And Kill. But no, They'll have to wait for the 'normal' Suicide Commando shows. (95/100)

The main act then. And One or Rick Shah, Joke Jay, Nico Wieditz and of course Steve Naghavi. This band shouldn’t be introduced any longer as soon after its founding, Metal Hammer became a club hit, and these guys stayed at the top in the synth-pop genre until now. The musical secret is sublime and simple: heavy energetic bass lines, typical And One synthesizer melodies and the fantastic voice of Steve. This Berlin boys gave E-Tropolis a worthy ending,.Streve knows his job, his movements, the melancholy that he puts into some songs, and of cousre how to push this party to the cllimax. Sometimes And One uses an EBM style, sometimes (too) smooth synth-pop. The many hits made the public stay until the final song. (90/100)

This indoor festival had the perfect location, sublime bands, an excellent organization, all the gigs started right on time, clean toilets, plenty of lockers and rest areas. There was even a wide variety of food stalls and everything at very reasonable prices (2 Euro for a beer). Only minus point is as said that you can’t watch everything, personally I missed the Icelandic Legend. The next edition is already in our notebook: 18th March, 2017.

Here's a compilation video. The full tracks can be seen on my YouTube-channel (numanoid65)