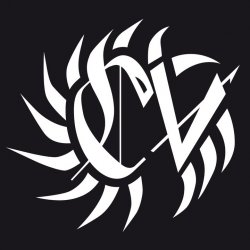 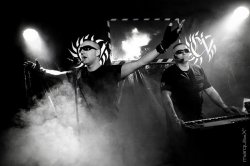 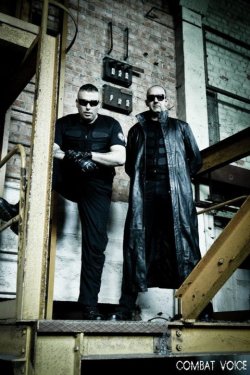 We really want to have our own, clear identity but it’s hard not to stick to these influences when you’ve been swimming into this kind of particular music for more than 25 years.

In a few days the next edition of the Electric Summer Night festival (ESN IX) will be taking place in Gaurain-Ramecroix (Tournai/Doornik). One of the guests is the Belgian duo Combat Voice. With a new album in the pipeline it seemed like a good time to have a little talk with the ever so friendly Combat boys, Bernard Feron and Richard Guillaume.

Hi guys, can you introduce Combat Voice to us?

Bernard: Combat Voice is a cold EBM duo created in 2010 in Belgium.

Richard: It’s a mix of several electronic styles like EBM, Cold EBM, Industrial, Gothic and these typical influences finally give a special and strong taste.

Bernard, you used to be in Fuze Box Machine and these days you are also active in Mono Electronic Density. But what about you Richard, were or are you in other projects?

Bernard, is there a difference in writing lyrics for Mono Electronic Density or Combat Voice? Because lyric wise you write more or less about the same subjects.

Bernard: Well, the topics are more or less the same, indeed. I’m fascinated by the human behaviour, psychology, psychiatry, quantum theories, science fiction, modern wars and the future of our world. Thus, you can find a mix of all these subjects in my writings for both Mono Electronic Density and Combat Voice, but I try to write them in different ways to clearly make different stories. My feelings are very different for each band. I also wrote and sang as guest singer for Ethan Fawkes and FoxP2 last year. I have to admit that my lyrics were close to these particular subjects too but I wrote them in another way to stick to their respective style of music.

It's no secret that you are both Front 242 fans, which can be heard in your music. But do you have less obvious influences as well?

Bernard: To name but a few, my main influences are Kraftwerk, Front 242, Nitzer Ebb, The Klinik, Fad Gadget, Joy Division, Depeche Mode, The Sisters Of Mercy,Einstürzende Neubauten, Skinny Puppy, à; Grumh..., etc... But I would say that I consider Combat Voice closer to The Klinik than Front 242 as we try to present cold music and also a cold imagery. We really want to have our own, clear identity but it’s hard not to stick to these influences when you’ve been swimming into this kind of particular music for more than 25 years.

Richard: My main influences are The Klinik, Nitzer Ebb, Leather Strip, Front Line Assembly but also younger bands like Hocico, Nachtmahr, Cephalgy, etc... Let say that my compositions are usually a mix of all these influences and a kind of link between old and new EBM.

Last year your excellent debut The Last Flow was released on Digital Density Records. How were the reactions on it?

Bernard: Very positive! We released the album in June 2011, we are now in August 2012 and we have only 60 copies left which is pretty good with regards to our small alternative market and the actual crisis.

I have to say, I really love it. It contains great tracks such as Illusion, Body Generation etc… and also the clips are pretty cool. I presume it was great fun to make them?

Bernard: For sure it was! Digital HD cameras and video software allow us to create very nice video clips and the results are really great in comparason with what we could do 10 or 20 years ago. And it’s very important to be present on youtube to promote and disseminate our music. Nowadays in our multimedia world, music and images are one.

Richard: Yes it really was! We are lucky to have a lot of friends who participated in our video clips. And Bernard enjoys the making of videos, so it’s always fun.

Digital Density Records is your own record label. The debut of Mono Electronic Density was released on it as well. Why did you start a new label in the first place, cause it’s pretty hard to run a label these days?

Bernard: When I created Mono Electronic Density with Jean-Marc Melot, we were supposed to be signed on a Belgian label but due to unfortunate reasons we had to cancel the contract and accelerate to creation of our own label to keep the promised release date of our first album. The advantage of such a label is that you are free to do exactly what you want to. No restriction on your music, lyrics, image and artistic choices. No deadline, no urgency. In the other hand, the weakness is the promotion, the distribution and the booking. Still it’s a big advantage to start and release any project or any first piece the way you want it to, before you get a contract with a real independent label.

Will you release other bands as well on Digital Density Records?

Bernard: We have two other solo projects signed on DDR until now: Brain Sektor (Electro Industrial) and The Face (Cold Electro). Most likely, it’s gonna stay like that cause it’s already a lot of work to manage the label, our bands and our respective solo projects.

You performed a few months ago live in Berlin with Vomito Negro, as far as I know your first foreign gig. How were the reactions?

Bernard: Very good! We were invited by the Common Roots organisation. They wanted us with Vomito Negro and K-Bereit. That was a great gig in the famous Tresor Hall and the audience moved a lot. By the way, thanks again to Timo and his team that was an amazing night!

Richard: That was, for me, a great experience and a great opportunity because Combat Voice is less than two years old, so it’s really positive to be invited in such a famous place.

In a few days you will be entering the stage on the next Electric Summer Night festival in Gaurain-Ramecroix (Tournai / Doornik). What may people expect from a Combat Voice gig?

Richard: They can expect a real EBM show with a new powerful sound because I remixed the whole live set.

Are you already working on a second album? And if so, when is it due to be released?

Yes we are and it’s almost done in fact. And we have to mention that as we took off really fast with our first album, the very active Italian label EK Product wanted to sign us for our second album. We can tell you that we proudly signed a contract in April this year and the official release date for our second album is the 18th of January 2013.

Bernard, how is the situation with Mono Electronic Density these days?

Bernard: There’s no concert agenda, we concentrate our time and efforts on our second album Human Inhuman (also on Digital Density Records). The release date is not known yet but most likely it’s gonna be in 2013.

Bernard, you played a few tracks of Fuze Box Machine during the Mono Electronic Density shows. Are there any plans to bring Fuze Box Machine and its releases back to life or has that chapter been closed for good?

Bernard:No no you're wrong there.Yes, indeed, Manu came on stage with Mono Electronic Density at Le Pot Au Lait in Liège in December 2010 as guest singer but it was to sing a Mono Eelectronic Density song. His first time back on stage since 1997! I was so happy that last year in April we reformed the original band (Manu and I, like in 1989) for a one shot gig to sing two Fuze Box Machine songs during a private birthday party at The Dark Cats in Mons. Thus the chapter is not closed for good. I can’t speak about a new album, it probably won’t happen, Manu is a very busy man nowadays. But I can already tell you that the band will reform for a unique, but complete gig with a vintage set (1989-1992). Wait and see... But you’ll be the first informed Jürgen!

What are the future plans for Combat Voice?

Bernard: Chaotic Universe, our second album on EK Product, followed by concerts and videos and maybe some good surprises.

Bernard: If you want to discover or support our band, join us at the ESN Festival the 1st of September in Tournai (with also Parade Ground, Void Kampf and XMS). And the 22nd of December at La Chapelle, Mons for an exclusive show to present our second album Chaotic Universe wiith the French electro duo Neutral Lies to open the show and DJ O and DJ Lady Irene to close the party.

Richard: I would like to thank our friends, fans and families for their great support since the beginning of Combat Voice. You guys are really precious!

Thank you for the answers and all the best with Combat Voice!

MIREXXX • ...after six electro-projects with different people, I realised that the working process with Posse was the most effective. And so Mirexxx was born.
EISENFUNK • On Their Way To Conquer Electroland
AGENT SIDE GRINDER • 'Analog equipment can fail you and adds the possibility of chaos, on stage and in studio'
LIGHTS OF EUPHORIA • ...becoming a father, aging and all that, has given me a broader pallet of experiences to write about
METROLAND • Making music never felt as good, over the past 20 years, as it does now.
DI*OVE • I'd love to hear AC/DC cover one of our songs. That would be ace.
DARK POEM • We need to be free to make whatever we feel like making, sometimes we’re soft and sweet, sometimes we’re hard and heavy and often our songs have a ritual or tribal character.
FOR GREATER GOOD • ...I feel our albums reflect us well as people. Eclectic, melancholic, not afraid of breaking the rules.
COMPANY OF STATE • Nostalgia is a gloomy thing, I prefer paranoia.
A.A.A.K. • There was a constant external ambiance of drills, road digging and heavy machinery that leaked through into some of the songs - it really is a buildingscape set of beats.

Other reviews from COMBAT VOICE
COMBAT VOICE • The force of Combat Voice is that every track has its own ambience!