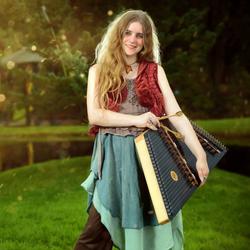 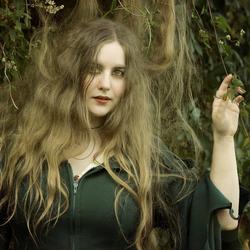 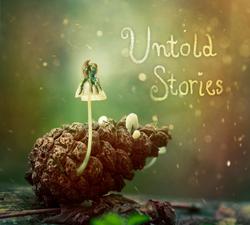 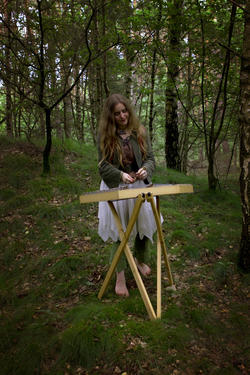 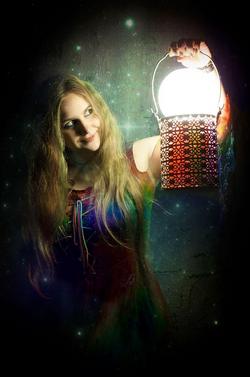 Our next challenge is to perform live as powerful as on the CD.

On Saturday, 26th March the Black Easter Festival starts, and the first artist you can see on stage is Elvya Dulcimer. Peek-A-Boo had a conversation with this talented Belgian lady.

Hello Elvya. Can you briefly introduce yourself to our readers?
Hello there! I'm Elvya, a full time fairy, an artist and a musician. A few months ago I released my debut album (Untold Stories), featuring a lot of guest musicians such as Arjen Lucassen (Ayreon), Fieke van den Hurk (Cesair) and Ivar de Graaf (ex-Within Temptation, Kingfisher Sky). It is my goal to make people happy with my music and to make them aware of the fact that our nature is in danger. I attempt to open the eyes of the listeners for the problems that are caused by humans on this planet. At this moment I'm working hard to gather a live band. It is a project first, and hopefully later it’ll become a permanent team.

Sometimes you perform as Elvya Dulcimer and that has everything to do with the hammered dulcimer. How did you discover this instrument, and what made you decide to use this as your trademark?
Years ago, I discovered a short movie on YouTube while I was searching for new music. It happened to be a movie with a hammered dulcimer. I was immediately sold, and I ran to my parents to show them the film, and I asked if I could buy one. My parents shared that feeling, and they decided that I could buy the instrument. A few weeks later, I finally had my own hammered dulcimer. I learned everything myself. The obsession was so big that I decided to make my it my stage name. It's my dream to introduce this wonderful instrument to modern people.

In Belgium, there are not many artists who play this instrument, I suppose you 're a bit unique, right?
That's right, especially in the beginning. Meanwhile, I know several people who play it too. Some thanks to me, others found it in some other way. It's always nice to meet people who play the dulcimer. They always are special to me (laughs).

Of course it has something to do with the instrument, but when I hear your music, I think of a daydreamer. Are you the kind of artist who is trying to escape the cruelty of the world with her music?
Yes and no. Yes, in the sense that I understand that some people will interpret my music as such, especially if they are not involved in fantasy as I am. That is fine. The music that I make comes from my dreams and my heart. Therefore it always will sound a bit dreamy, but then again I try to sing about the atrocities of our nature (the beautiful things too). Just listen to Nature. Another example is Leave Me. I wrote it after watching a documentary about a teenage girl from a poor family who wanted to study, but she could not because of her family situation. That’s also a cruelty of this world, I think.

Your music is also medieval, so I think we are talking to a woman who is fascinated by fantasy, right?
Oh, certainly! Fantasy is my world and I hope to make it my profession. What people usually do not know is that I am also a graphic artist. I develop artwork design as you can see on my CD and I write stories. At the moment,I am working on my first children's book that takes place in a fantasy world. I also like to visit fantasy fairs. I like to be on stage, but I'm happy if I just can attend the festivals. It's like going to a family party. You meet your friends and you can talk to them. The relaxed atmosphere at such a festival is delicious. People will judge you less, and how you look is unimportant. The inside is more important. Something the world can learn a lot from!

Two years ago, you took part in the preselections of the Eurovision Song Contest. Can you tell something about that, and were you not afraid to step into the media circus?
One evening I watched TV and suddenly I saw an advert in which they were looking for candidates for Eurosong. I thought: why not? I send them an audition. I really didn’t expect a response, but to my surprise I was selected for the first round, and so I made round after round, until I finally was part of the TV finale. I was too alternative for the jury, but it was a great time and I made great connections. In all honesty, I didn’t think I was ready for it back then. Eventually, Lordi was not exactly mainstream and they conquered Europe. Never say never...

Last year you released your first album Untold Series. Everything I read about it, was extremely positive. Yes, the reviews and feedback on my debut album were great. That's great for everyone who gave his/her heart and soul, and it certainly gave me a boost. Of course, now the next challenge is to perform live as powerful as on the CD.

When will your next album be out, and do you have any idea how it will sound?
Preparations for the second album already are in full swing. The songs ready exist in a raw version and they’re ready for the studio. The only problem is the money, because releasing an album cost thousands of euros, and at this moment, I still have to pay some debts for Untold Stories. So, I hope the recording will start as soon as possible. And how will it sound? Well, I already can promise you that it will be a very diverse album. I always try to be objective, and at least there has to be one song for everyone. A song of which you can say: that is written for me!

You played with many renowned names on stage. How did you get in touch with people like Liv Kristine?
I met lots of people via others. Some I contacted myself or they contacted me. With Leaves' Eyes I got in touch via their former guitarist, who I knew via someone else. At one point they contacted me because they wanted to have a dulcimer on their album. Since then, I play on their CD’s, and hopefully live soon.

Soon, you will play at Black Easter 2016. What can we expect?
Some songs with a dulcimer and also some tracks from Untold Stories. Because playing live is new for me, and as all my musician friends live very far away, I probably will work with a backing track. But who knows, if I’m lucky, I might have one or more guest musicians with me (laughs).

Are there any artists you want to see yourself?
I am very curious to see the gig by Jo Quail. Cello always has been an instrument I like to listen to. Her alternative style is definitely something I look forward to.

What's your favorite record of all time and why?
What a difficult question. There are so many and it always changes, but I do think Mother Earth by Within Temptation is a good choice. My parents introduced it to me when we were on holiday in Switzerland. I remember that we drove on a mountain pass and it was snowing. I was just 10 years old ,I think. Ice Queen came out of the speakers of our car and we all sang along when we drove off the mountain pass at five kilometers per hour. That was an adventure! And the beauty of it all? Ivar, the drummer of the album.... is now the drummer on Untold Stories!

With whom would you not mind to be in an elevator for 8 hours and what would you do then?
Again a difficult question! But I think I would like to meet two people in that elevator. John Lennon and George Blagden. I think I have a lot in common with John, and I would love to have a deep philosophical conversation with him about the music and the world. Imagine that! George Blagden because it is my favorite actor. I like to see him play, and he's one of the nicest men I've ever seen in my life. Moreover, his voice is great too. He plays Athelstan in Vikings, and now he has the leading role in Versailles. Of course, I watch the series only because he plays in it. I’m allowed to have some guilty pleasures, right (laughs)?

The Black Easter Festival will take place in Zappa, Antwerp on Saturday 26th and Sunday 27th of March.
More info and tickets: http://www.blackeaster.be

FORGOTTEN SUNRISE • 'It's nice to do something on stage when you don't really know what happens next'
OAKTREE • It is my goal to find some peace in the things I do, I am not interested in having a blitz career.
DOGANOV • Doganov has the tendency NOT to listen to others...
INNERWOUD • I like the fact that the music appeals to very diverse audiences, both heavy metal and drone-oriented fans and people who tend towards classical or minimalist music, but also people who have never heard it before.
ROSARUBEA • We will experience our performance at Black Easter with deep involvement and care.
SPOIL ENGINE • We did not want to be just another female fronted metalcore band.
CANTERRA • You don’t have to think long when you get the chance to support Lacrimosa.
KONER • We want to spread our own sound. It will be a long road, and it certainly won’t be easy, but we want it!
DAS ICH • Basically even a home concert in your living room can be the most beautiful experience as long as you have the feeling that your music draws a direct line of nonverbal understanding between you and the audience.
A;GRUMH... • 35 years of à;GRUMH... will be celebrated with a worldwide exclusive one-off reunion show at BIMFEST XV!