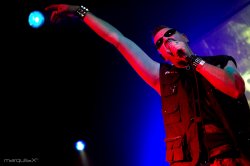 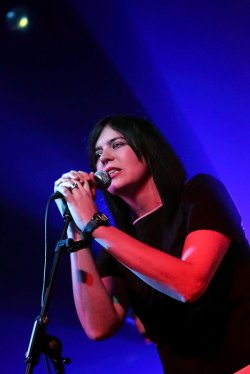 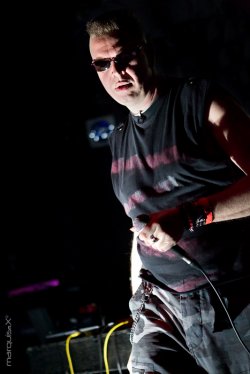 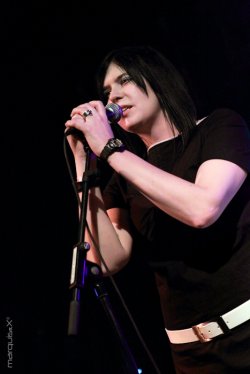 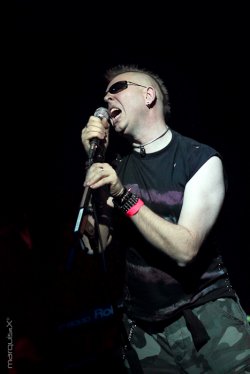 My roots can be found in the punk scene, and I try to bring this out in an electronic way.

On the 29th April Dark Entries will have the 2nd edition of the Dark Entries Night. Along with the Brussels-based band Perverted By Language, Liquid G will enter the stage in Ghent. A band that is doing their stuff for 25 years and still they believe in the power of the underground. We had a chat with founder Peter Van Den Bogaert.

Liquid G. does exist for 25 years, seems like an eternity or not?

Time flies as they say, but yes almost 25 years…don’t really count it myself.

In those 25 years you experienced music throughout 3 decades. Do you think a lot has changed?

Yes, I do. It’s not only the music that changed but the scene too as it felt like there was a much bigger freedom to do your own thing.

Now they decide what is good or not to be part of the scene, be translated as everything has to be perfect on both cd and stage. If you ever see Liquid G. on stage you know we’re nothing like that…

How have those changes influenced Liquid G.?

I guess chaos ruled like it always had. Even our musical style changes from time to time…from electro to industrial to noise….

I think we did everything and that’s fine for us as long as the fun is there.

It seems so important that we put a point after the G. in Liquid G., not?

We started as two bass-players with a rhythm box (Peter VB and Michel VDP).

It didn’t last that long till the garbage dropped, so yes that point has to be there!

When you started in 1987, what were your motivations and which big dreams did you had in mind?

I guess I never had that much of big dreams as for me it was a hobby, even if at that time it worked pretty fine. I was involved in the tape scene and that was an international thing : America, Portugal, Brazil, Germany, France, Holland, Japan.

In that time I only had one problem, I thought my stuff wasn’t good enough to be played on stage and so it happened I only was once on stage, with the 10th anniversary of Suicide Commando that was.

You could witness how some of your friends got successful, how did that feel?

I was always proud that I knew these people. I have a lot of respect for them and I know it’s not that simple to make it. It was great to be in the studio with them or sharing the stage:

Also Dirk Ivens taught me a lot about cd recording and gig playing.

All those EBM-bands over here in Belgium, do I have to see that as a sort of clan?

Well, honestly said I never considered Liquid G. as an EBM-act in the first place, and I’m certainly not an EBM-man. My roots can be found in the punk scene, and I try to bring this out in an electronic way. I never pigeonhole bands in the first place.

I agree on that one, Belgium is such a small band and certainly the black scene so we definitely should work together.

I don’t mean it with some aftertaste but I never thought Belgium had that much respect for its musical heroes.

So I guess you have to fight for every opportunity to get a gig?

Absolutely true, it’s not that easy to find a place on some stage.

When you don’t sell cd’s or your name isn’t hip, you can forget it.

Do you think digitalizing of music is a good thing?

What do you mean? Digital sales or digital recording?

I don’t care about it that much and good or bad, we have to go with it as it’s a sign of the times.

You did remixes for institutions like Crash Course In Science or Portion Control, something like that must make you proud, not?

Personally I think our version from “Being Boiled” is genius!

In 2009 Kim joined the band, how did that change the band?

Ah that’s something else as she really gave us a different vision on how we had to look on the music scene within Liquid G.

Now Kim has joined us, I can find more time to care about our music while she is concentrating herself more on the lyrics.

Playing live is also totally different as we can switch places now.

Everything clicks between us, we feel things that weren’t arranged before.

What is your favourite record of all time? And pleases state why…

Ah, that’s a tough one…for Belgian ones I definitely go for “Sabotage” by The Klinik which was just great and innovative and it still sounds good.

On a national base I can sum up something like 100 but let’s leave it to Sex Pistols, Dead Kennedys, Ramones, Cabaret Voltaire, Skinny Puppy,…..

MONO ELECTRONIC DENSITY • We have a natural capability for innovation. It’s sad we cannot say the same for the management of our country…
SUDETEN CRECHE • Many things in this world are cyclic and musical taste is one of them.
JULIANNE REGAN • I don't feel like I deserve the title of 'Goth Icon' really; when I hear that I think of people like Siouxsie, Nick Cave, and Peter Murphy, not me.
NACHTMAHR • Every music and art form is cathartic.
PERVERTED BY LANGUAGE • I think shoegaze dreampop no-wave disco with hint of post-metal and psychadelia would be a way of describing us
MISS FD • Love never dies
JEWELS OF THE NILE • Decadence and Pleasure!
SONAR • I really would like to see SONAR at '10 Days of Techno'
IONIC VISION • Did you think we became people without dreams?
SPECTRA*PARIS • Magazines, illustrated books, movies, dreams... are just my 'detective area'.