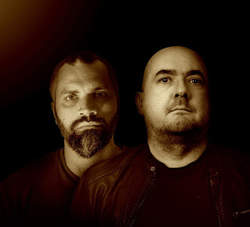 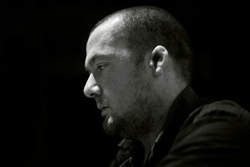 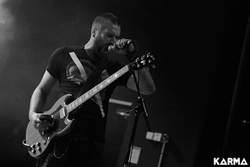 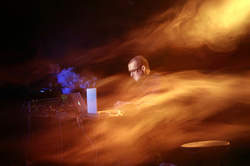 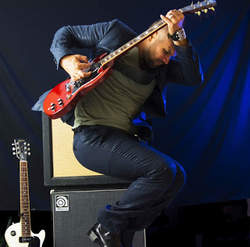 Philippe and I would like to work together live. The fact there is a large body of water between us - I work in the UK and Phillippe is in the US - is not helpful.

Mark Harris is active as a solo ambient artist and JOHN 3:16 is the project of Philippe Gerber creating apocalyptic fields of sound. On ‘Victory Over The Sun’ - the name comes from the first futurist opera from 1913 - they have joined up to make something that we described as ‘a steamroller of sound that rolls over you, at times soothing and extremely interesting.’ We heard out both artists on this remarkable and successful cooperation.


Hi Philippe and Mark. You just released a collaboration CD under the name ‘Victory Over The Sun’. Why did you choose that title for your CD?

Mark Harris: It came about when working on our first track together, which became the title track. It was way more conventional as we were still finding our feet on the project. Then Philippe said: ‘hold on I'm doing it again’, and he proceeded to rip it all to bits and to add a mind shredding guitar part... It was a classic light bulb moment and I emailed him back saying: ‘Wow!! Sound's like you “punched a hole in the sun”’. And Philippe was like ‘That's it. That's what we call the project.” I've always been into the Russian Constructivists and always loved the set designs for the 1913 Constructivist opera ‘Victory over the Sun’ created by Malevich. It caused a riot when performed. So we went with that.

Philippe Gerber: From the start, I knew the title and the album concept would have to be connected to cosmology. I envisioned what we would come up with together musically speaking before we started recording anything. I dreamed of black holes, dead stars and more. When Mark came up with the idea of naming our album ‘Victory Over The Sun’, I was excited. At the time, I was already working on the new JOHN 3:16 album ‘The Sun Shall Be Turned Into Darkness, and The Moon Into Blood...’ and it seemed like the perfect name for our work.

How did you meet and how did you decide to work together on this project?

Mark Harris: It was via soundcloud - Philippe's work kept on turning up in my feed and I posted the odd comment that I really liked the apocalyptic feel to his work - and Philippe was into what I was doing as well so we began exchanging CD's when we had a release so it when from there. I had just released ‘In the forests_ the animals are moving’ on n5md, which used some live heavily processed prepared tabletop guitar played by me... So I was kind of thinking of taking my work in a harder, more aggressive route, and then as if by magic Philippe emailed me and suggested we work together on a project.Philippe Gerber: From the start, I knew th

Philippe Gerber: I have been following the label n5md since it’s beginning in 2000. One of my favorite artists on the label is Mark. He's one of the best ambient artists out there. His albums are magical. I have a list of artists I want to work with (most of them are dead now), and Mark is on it. When he agreed to work on something after I got in touch with him, I knew we would come up with something people would be excited about.

Mark wrote on his website: ‘It has pushed us both outside our comfort zone and created something we would not have attempted individually.’ How did you work?

Mark Harris: Well, nearly all of my work is kind of ambient, kind of dark ambient, but ambient non the less... And Philippe works at the outer reaches of mega intense rock (for want of a better description). Philippe (correct me if I'm wrong here, Philippe) has a more intuitive, gutsy, in the moment way of working, whereas I tend toward an intellectual, considered, SLOW way of working that will listen to the same piece for months (literally) before making a tiny tweak. I would send a studio improvisation to Philippe and literally within the week he would send me 5+ tracks of guitar and drum parts as a response. It took a while to process. Everything he did was unexpected but totally spot on. Working with Philippe definitely changed the way I worked and altered the way I look at music making.

Philippe Gerber: For my solo albums, I usually start a song from scratch based on a beat, a guitar riff or a sample. The way I worked with Mark was different. I had to sit and listen to what he sent me before I could record guitar or bass parts. I had to sing some of the parts to find the right melodies. I didn't write anything down. For some of the songs, I recorded up to 30 harmonized guitar tracks. I sent the best 5-6 ones to Mark.

What do you think are the requirements for a good collaboration?

Mark Harris: I think the main thing is working with someone who has a totally different approach to you, otherwise you just end up producing more of the same.

Mark, you make music with field recordings and computers, and you are also active as a visual artist. Can you tell us more about your art?

Mark Harris: Well, I studied as a painter but always had a strong interest in systems and process art. Which is how I found my way into music. In the early 2000's I started producing generative animations (animations which run but will never repeat). These gradually started to use audio - then audio only. I have always been into systems music like Steve Riech, and English composers like Michael Nyman and Gavin Bryars. And of course Brian Eno. That's how that started, the last series of work I produced were based on automatic writing and drawing - where you supposedly tap into the subconscious - and then ran though 3D modeling software. The result was painted by hand. There are some examples on the website if you fancy a look.

Philippe, why wasn't the CD released through Alrealon musique, the label of which you are one of the managers?

Philippe Gerber: I'm trying to release my JOHN 3:16 albums on other labels. I'm trying to separate both entities: Alrealon and JOHN 3:16. I want to reach a larger audience by releasing my music on different labels. It's also hard to be managing a label while promoting your own work. Little Crackd Rabbit Records did a great job with the promo, I wouldn't have done it better. I'm also proud to be part of their roster.

JOHN 3:16 was born with the concept of making music with religious and biblical references. I can't find any on this CD. What are your future plans with this project?

Philippe Gerber: For me everything is connected to religion. Stephen Hawking has proved that there is an existing link between the Universe and our concept of deity (yet to be found). For me, ‘Victory Over The Sun’ with title tracks like ‘Requiem for The Lost’ or ‘The Angry Moon’ has a Biblical tone in consonance with my previous works. As JOHN 3:16, I'm still working on two releases coming up this year. The first one is a CD compilation of B-sides I recorded the last ten years as JOHN 3:16 (I can't believe I started the project in 2007). The second one is the album untitled ‘The Sun Shall Be Turned Into Darkness, and The Moon Into Blood...’ and tells the story of the Apocalypse as seen by John the Apostle (Book of Revelation, A.D. 96). I started recording it in early 2016 and it should be ready by the end of March (James Plotkin will be taking care of the mastering). We are planning to record a new album with Mark later this year. I'm really looking forward to it. I started a new collaboration with Belgium-based artist Be The Hammer, it's something I'm excited about as well. I'm hoping to play more shows this year too. I'm so busy with Alrealon and my studio projects, it's hard to find time to go out there and play.

Mark, what are your plans for the future?

Mark Harris: Well the next thing is a remix project put together by Bigo Twigetti and Moderna Records - where a number of artists remix a track by the composer Madeline Cocolas. I work full time as a graphic designer so I only have a week off to produce something which is a nightmare for someone who take months to produce anything. Philippe and me are planning a next release and are looking to work with a cellist and violinist, so watch this space. Other than that I've got the problem every other artist has: how to make a living from doing something I love. if anyone has an answer please call me! I'm also thinking of ditching computers and working with live instruments entirely. How this will work? I have now idea, and as I got very very ill in 2015 and suffered a stroke. I can't play guitar anymore this will definitely take a lot of planning. Philippe and I would ideally like to work together live (as we have only worked via the internet up till now). The fact there is a large body of water between us - I work in the UK and Phillippe is in the US - is not helpful. We will be looking at playing a few festivals together, at how the setup works and how we interact live. It would be interesting!

With courtesy of Dark Entries Magazine

AMBASSADOR21 • Lust For Life - A short interview
VARIOUS ARTISTS • 24.2 INTERNATIONAL E.B.M - DAY | courtesy by Inferno Sound Diaries
AM TIERPARK • ‘THERE’S NOTHING LIKE HOLDING A 12” RECORD IN YOUR HANDS’
ROTERSAND • ‘SOME BANDS ARE A COMPLETE PRESET, IN THEIR LOOK, IMAGE, SOUND LYRICS, PERFORMANCE, VISUALS, EVERYTHING…’
THEODOR BASTARD • The worst thing for a musician is to become predictable.
DOLLS OF PAIN • 'We make Dark-Electro/Crossover and not simply Dark Electro'
TORUL • 'The scene is very conservative'
LPF12 • 'Music from my heart and soul'
AH CAMA-SOTZ • Interview with Ah Cama-Sotz / Herman Klapholz
OPENED PARADISE • We crave for what is hidden and we are in search for what is lost.