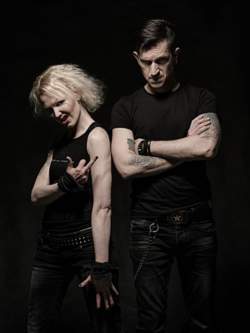 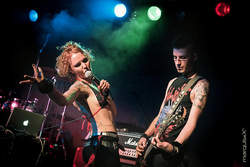 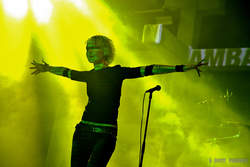 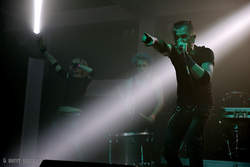 Lust For Life - A short interview

Ambassador21 recently celebrated their 15th Anniversary. Natatasha A Twentyone and Alexey Protasov have both been terrorizing industrial audiences since 2001 and have released a number of important productions. Most of their work has been self-released on their own label Invasion Wreck Chords. “Human Rage” is the newest opus from the Belarus band and is a new mix of industrial hardcore, punk, power-noise and other related genres.

We survived. We enjoyed. We did so many things, met so many people and visited so many places. We will do it more.

The anniversary has been celebrated by the new album “Human Rage”. What kind of album is “Human Rage” all about?

This album probably is the most conceptual and solid work we have ever released. “Human Rage” is about religion and terrorism. It could be nice to make an album about happiness, we are not joking, but unfortunately during the work on “Human Rage” – from the idea to release – we didn’t get a chance to be relaxed with all these disgusting things, which happened nearly every day. Paris, Brussels, Copenhagen, Kabul, Aleppo, Nice, Mosul, Orlando, Gaza, Istanbul... Track “Fear Level Red” was written the day after Charlie Hebdo attack in Paris but “Human Rage” is not about hatred, it’s about lust for life. Our best album ever.


You introduced the album as ‘a martial dance in the name of life’. Can you give us more details about this quote?

Life is wonderful and highly valuable. It must be protected.


The title song of the album took me by surprise, as if revealing a ‘softer’, but efficient and well-crafted side of the band. Tell us a bit more about this song and its approach?

This song is not soft, it’s harder than many other songs on this album. We are not speaking about instruments or tempo, which are just tools to reach an aim. The attitude makes the song harder or softer, not just the sounds, synths or whatever. The hardness of the music is not possible to measure with distortion, BPM or ‘crazy’ screams. We don’t make ‘crazy’ music.


I always experienced your sound as something different, a kind of anarchistic sound without compromises! Where does that come from?

From life - how we feel it, how we love it, how we are ready to defend it.


How do you usually proceed to compose your songs?

Maybe, as somebody else does – it’s a long and complicated working process, which could bring a great or not so great result ;-)

VARIOUS ARTISTS • 24.2 INTERNATIONAL E.B.M - DAY | courtesy by Inferno Sound Diaries
AM TIERPARK • ‘THERE’S NOTHING LIKE HOLDING A 12” RECORD IN YOUR HANDS’
ROTERSAND • ‘SOME BANDS ARE A COMPLETE PRESET, IN THEIR LOOK, IMAGE, SOUND LYRICS, PERFORMANCE, VISUALS, EVERYTHING…’
THEODOR BASTARD • The worst thing for a musician is to become predictable.
DOLLS OF PAIN • 'We make Dark-Electro/Crossover and not simply Dark Electro'
TORUL • 'The scene is very conservative'
LPF12 • 'Music from my heart and soul'
AH CAMA-SOTZ • Interview with Ah Cama-Sotz / Herman Klapholz
OPENED PARADISE • We crave for what is hidden and we are in search for what is lost.
AGENT SIDE GRINDER • Our new compilation album is called “Industrial Beauty”. That phrase sums up a lot how Agent Side Grinder sounds. Brutal and menacing but always on a foundation of strong, beautiful melodies.

Other reviews from AMBASSADOR21
AMBASSADOR21 •
AMBASSADOR21 • Our deep idea is EVERYONE has a RIGHT FOR RIOT - it's doesn't fucking matter 'why?', is it 'logical' or not. If you just want to - it's enough. Go on!