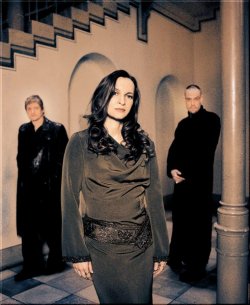 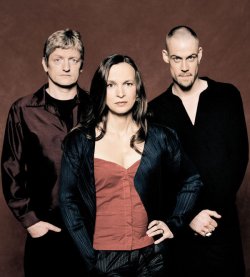 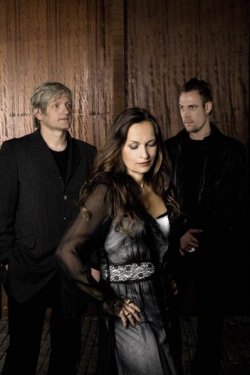 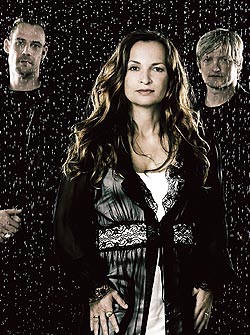 The music of Estampie is created in the rehearsal room, Qntal is a computer project.

One of the bands that will be featured at this year’s Shadowplay are Qntal. Peek-A-Boo had a chat with them.

What’s in fact the difference between Estampie and Qntal?

Estampie is an acoustic project that was originally based in the “authentic” Early Music scene. QNTAL was a crossover project between electronic somewhat “dark” music and original melodies and instruments. The music of Estampie is created in the rehearsal room, Qntal is a computer project.

If you compose a track, how does that work. Recording something and then decide if it’s going to be for Qntal or Estampie, or do you have that in mind before?

No, from the beginning it is clear which project is on: practically is Estampie a band gathering in a room and rehearsing. Qntal is in the beginning Syrah, me and the computer , although at the end on stage Fil plays the synthies.

If I’m right you were noticed by Alexander Veljanov, right?

It was not Alexander, it was Ernst whom I met at the Munich theatre. We both love theatre and used to work a lot for it. He was the expert for Electronics and I for the medieval music. At that time (late eighties) this was a very new concept. We had quit clear musical ideas and the work was rather exciting

How did the fascination for that genre started?

Well, the classification changes constantly. There were times in the beginning in which we were regarded as revolutionary, even as traitors towards the “authentic” interpretation. Now since we have this movement of medieval rock as well as the Easy Listening Medieval Music our interpretation is seen as more classical again. I was classically trained and so I was always in a very close contact to any forms of “serious” music. Only the Opera I never liked.

Qntal and Estampie are “specialized” (if I may say so) in medieval music. Is that a choice that’s been made for always or can it be that you do something completely different?

We already combine medieval music with a lot of different styles: Qntal with Electro, a bit of Rock and Pop. Estampie with Arab Music (Al Andaluz Project), Mongolian Music (Marco Polo) and many more. In the moment we work on a program about Scandinavian Music.

I understood that your music is based on lots of traditionals. How do you find these?

This is just a lot of research, but everything we play is published and everybody can do the same work. There is no secret behind.

I guess you must laugh with people like me who have no idea what’s been made all these centuries ago. I guess you’re kind of archivarists, not?

No , I´m much too chaotic for that. What drives me , is the creativity. I develop always new ideas. What else can you do with medieval music. That´s my main talent. Many other band just follow the road that their precedors prepared. I´m constantly building new roads.

In the past you made some tracks that had an uptempo beat but I guess you definitely have skipped that part, not?

Our aim , in both the bands , is to show a wide spectrum what medieval music could be. So it can be romantic , hard, party and dance , folky, intellectual, simple or complicated.

Qntal and both Estampie are here popular among the gothpublic.
Is that the same in Germany?

Yes, but not exclusively. We are known , but still not always liked, in the classical scene. The more progressive part likes us and invites us for festivals and so on, the more conservative not so much. The same is in the Gothic Scene. A part is curious to new things and interesting approaches, but not everybody.

In that perspective, hasn’t it been kind of difficult for being taken seriously by the classic audience?

I always thought: music is music, there’s only good and bad music.

Never happened that you listen to your own music?

Sometimes yes, but years after I have made it. Sometimes it´s quite interesting.

I ask this everybody : what’s your fave recotrd of all time and please state why…

DAF • When you listen to EBM bands nowadays, they often sound like us.
HOWARD JONES • Live shows are the future of music because you can't digitize a live performance... yet.
PROJECT PITCHFORK • Every single human has got the power to change the society and the world
VITA NOCTIS • We are thrilled to be on the same stage with The Klinik again in Beveren. It's like a flashback come true!
COVENANT • The Belgian EBM scene was a major influence for us!
EMILIE AUTUMN • I'm a Muppet crossed with a unicorn!
PSY'AVIAH • 'You cannot label our music. It's Psy'Aviah-music, that's what it is'
FOUR DIMENSIONAL NIGHTMARE • Out…now…“Sludge”…by…Four…Dimensional…Nightmare…
TRUE ZEBRA • BUM NUMBER TWO: KEVIN STRAUWEN [TRUE ZEBRA]
ANOUK WEBER • Our purposes are not commercial....we just want to have fun with our music.

Other reviews from QNTAL
QNTAL • QNTAL returns with new energy!