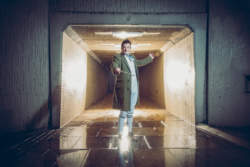 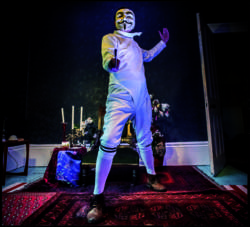 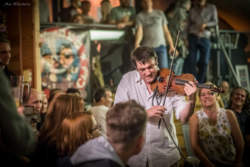 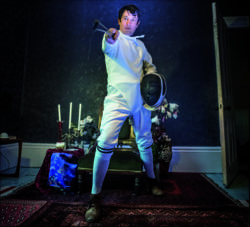 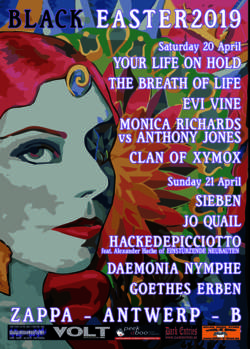 The European Union are kinder overlords than the ones we may well inherit, out on our own, pretending we are not part of the world.

Brexit causes huge debate. One of the people who can not get over it is Matt Howden from Sieben. It resulted in a great album: 'Crumbs', a collection of songs about the state of affairs in the world. An angry disc, for sure, diluted with a generous portion of humour. We did our best to calm him down…

‘Crumbs’, your latest CD, is without doubt the most politically motivated one you have made. Up to now, you had an approach that was more purely artistic. What made you choose to make an overtly political stance in your work?

With previous Sieben albums, I would head off to my studio, shut the door and leave the world behind. The aim was to create my own world and a particular vibe that suited the theme of the music. With Crumbs, world events, the news and the bad smell of current world politics followed me into the studio. I couldn’t shake it. Nor the anger that I feel.


More artists seem to rediscover the power of engaged music but there is certainly an opposite movement. Political movements preaching xenophobia, isolationism, conservatism, vulgarity, authoritarian leadership, warmongering and nationalism are on the rise. Trump in the USA, Brexit in the UK… What do you think are the causes of this ‘populist’ movement?

The world is at a point of immense change. It has contracted and shrunk. Border walls are up. Populists thrive on division, division of people. Of attacking the intellectual, denigrating sanity and calm. It’s an easy and dangerous route to power and control. For instance, who would have thought we could be back to a Cold War scenario, with the click of a finger? Almost as if two nations had decided to ‘ramp up’ pressure in order to garner popular support for themselves at home, to push their own agendas, to profit massively from the chaos that ensues.


One aspect that critics of politically motivated songs point out, is that they are not ‘timeless’ music. I would reply that if you look at classic, ‘timeless’ albums, they are all very well connected to the time in which they were recorded. What would you comment on that?

A good song is a good song. But as you say, also connected to the time it was recorded, both in its sound, its production and in lyrical content.


One must love a title as ‘I Will Ignore The Apocalypse’ with the sentence ‘A better nature will endure’. Or the satire of ‘Here’s The News’. You make good use of humour on ‘Crumbs’. Do you try to take up the role of jester in order to spread your message?

Humour is really important to me and it's something that I’ve been unable to squeeze into previous Sieben work. On the whole. It didn’t fit with the style of works such as ‘Ogham Inside The Night’ or many of the earlier albums. ‘Sex & Wildflowers’ and ‘Desire Rites’ had some sneaky humour in them, I suppose. With ‘Crumbs’ I’m laughing and making a joke, otherwise I would scream and wail. It is ‘gallows’ humour.


‘Crumbs’ is of course an angry and ‘Dark Enough’ CD but you seem to end it with a positive note. Such songs as ‘Liberal Snowflake’, ‘Forge A Better World’ and ‘We Will Be Alright’ are very optimistic. In short, you believe we will be able to confront all the wrongs you mention on the CD. Where does your hope come from?

Crumbs can roughly be divided into three types of songs, all with a bit of tongue in cheek: Angry. So outraged that I can only take the piss. Positive. My hope is decent people speak up and act decently against a tide of fear-and-hate-mongering.


You are obviously angry about Brexit but I have the feeling that opponents of Brexit tend to idealise the European Union. The Union gives much power to the unelected European Commission and allows only restricted power to the Parliament. People have the feeling that they are ruled by technocrats who – at the end of the day – are closer to big business than to the people. What would you tell them?

I would agree, to some extent. I don’t see the European Parliament as by any means perfect. Big business is still allowed to run unchecked; contracts may well be secured by dubious means etc, as with all governments. But they are better than what we had, from either side, here in the UK. Better spreading of wealth to poorer areas, better environmental laws, better labour laws and so on, in many other ways. Second, that Europe’s combined voice has been and is more sensible and rational that current US, Russian, Korean, Arab voices, on the world stage of politics. Third, that leaving the Union is economic suicide in so many ways. Europe is our neighbour, our main point of trade (both ways), and the ‘union’ makes economic sense on so many levels. Overall, the world for sure needs to overhaul ‘big business’, the notions of ‘shareholders’ and ‘economic growth’. I would agree. And that 20 people own half the world’s wealth (to quote myself) “is a sickness”. They are kinder overlords than the ones we may well inherit, out on our own, pretending we are not part of the world.


You have visited different countries in Europe and they have influenced your music. I think about the Norse, Lietuva and Briton EP-series, later merged into the ‘The Old Magic’ CD, in particular. Coming from a background in the neofolk-scene – you have worked extensively with Sol Invictus and Tony Wakeford – in which the idea of a ‘European culture’ is very important, what would you say unites this diversity of countries? Is there an European culture?

There are many cultures and many ways in a global world. We must recognise this. I think we perhaps have more in common with each other than we do with those further afield, but there is not A European culture. Nor should there be. We are beautifully disparate but with a union we are stronger and we are less likely to pick fights with each other, too.


Speaking about the EP series. The Belgian artist Empusae recently made his version of ‘Užupis’, a track featured on the Lietuva EP (and also featured as ‘On The Other Side Of The River’ on ‘The Old Magic’). What did you think of it?

I really love what he’s done with it. Always nice to hear someone else’s take on your own work and what they add of themselves and omit of you. I’ve done the same, the other way round, remixing Nicolas’s work, Sieben-style, and was really fun to do.

I love playing at Rebellion. And I love the challenge of an audience that is new to me and I’m new to them. This year I played 2 shows at Rebellion and once a couple of years before. It's sometimes a little difficult to get people to your shows as so much is going on at the same time and also because such events tend to be nostalgia-based for many people attending - so they’ll obviously go to the stuff they know. Not the best place to have your music ‘discovered’ perhaps but a fabulous event that I always enjoy - been 4 times, played 2 of those - and always relish playing at. And a nice new audience for me, with Crumbs more accessible to them than previous albums.


Like many other independent artists, you chose to distribute your music via bandcamp, which means that everyone everywhere can listen to your music for free and only a few will buy the download or the physical record. What do you think the benefits and the disadvantages of bandcamp are?

I find bandcamp quite empowering. For starters, you can set the number of times people can listen for free until they need to buy. I’ve set mine to 3, so you can hear the entire album 3 times before deciding if you’ll purchase it. I release on Bandcamp in tandem with digital release through a distributor - in my case AWAL - who add the release to 250 or so sites, for purchase. If someone buys it from Bandcamp I get 85% of the payment. If someone buys it from iTunes - or most of the others - I get around 60%. With such small margins these days it adds to a very meagre income for a ‘niche’ - not very successful financially, shall we say, politely - artist such as myself.

THE ARCH • Living healthy can be pretty stressful
MICHAEL MCKEEGAN • 'We had to approach the songs in a different manner.'
THE BLADES • Too Late To Stop Now! | The Return Of The Blades - An Interview With Paul Cleary
NOIRE ANTIDOTE • 'Negative etiquette' resemblance the negative sides of human behaviour but more translated into a feeling.
DOPPELGANGER • 'We are goths, and we only remember the sad stories :)'
THE NAMES • We're lucky to have everyone still alive and well, unlike many of our friends of Factory records.
PAUL LEARY (THE COCKY BITCHES,BUTTHOLE SURFERS) • 'My mind has a jukebox that I cannot unplug.'
THE HEARTBREAKERS, THE WALDOS • 'Being in a band is a way of life!'
DAVE INOX • I Am Never One Hundred Percent Happy With The Result Of My Works
RUSSIAN DARK COMMUNITY • New groups are always good, it is better to discover something new than to listen to what is already advertised on every site for the hundredth time.

Other reviews from SIEBEN
SIEBEN • I have changed the ‘Sieben’ sound... this new sound is far more punchy, and direct!