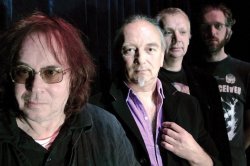 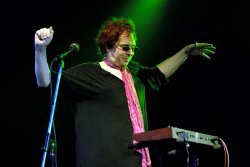 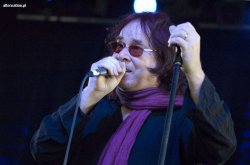 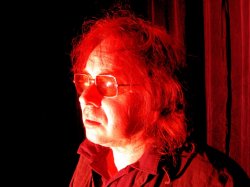 How can anyone grow tired of a life that constantly throws up fresh challenges?

It sounds like a daily event, but The Legendary Pink Dots have just released their newest album Chemical Playschool 15 on the Italian Rustblade-label. There are no surprises, just an unique beauty. Why changing a winning team anyway? Three decades this British band are offering us psychedelica which is added with a touch of darkwave. Peek-A-Boo is very proud that they could interview this icon, with a big thanks to Rustblade for realizing this.

Dear Edward, let’s go back into time. You started out in 1980. That’s more than three decades making music, how would you describe them and what are the highlights?
It’s odd to place myself back in the world of 1980 when even sitting here typing on a computer bordered on the unthinkable. Here I sit, with a stack of hard drives on the table containing thousands of albums from the last five decades, married to Alena ,who is Russian, mobile phone switched off…

None of this would have been possible in 1980. For a start Russia was the Soviet Union then.It’s been a great ride and I hope it continues to deliver such delights.

Highlights? Well, headlining the Filmore in San Francisco must count as the sense of history was overwhelming. Playing on a stage carved from volcanic lava in Mexico City was another, being scared to play the test pressing of our first vinyl album comes to mind.

33 years is a long time and I count myself lucky to have shot the shadow of a conventional existence through the heart all those years ago. I’ll never tire of this however much of a struggle it can be to survive sometimes (you know, there’s always a way through).

From highlights to lowlights is a small step. The last year were not easy. There was the departure from Martijn and I read a manifesto of you in where you said it was hard to get gigs. And still you’re not giving up, do you never get tired of it?
How can anyone grow tired of a life that constantly throws up fresh challenges? It is harder to find shows these days, mostly because of the recession. Even so, it means more time for recording and perhaps that’s an even greater joy. I was sad to see Niels and Marty leave ,and happy to report that the friendship is still very much alive. But it meant a fresh start for the Legendary Pink Dots with Erik Drost rejoining, and there is a fresh energy about the band these days.

The Legendary Pink Dots always have lots of different members which is normal for a band that exists for 30 years. How do all these people got involved? Are they knocking on your door or do you search them yourselves?
In the early days we tended to go looking. Since the first albums came out the knocks were on our door. In fact the changes became much less since 1988 , which was a long time ago now.

I’m afraid I’m quite wrong but I often tend to think that The Legendary Pink Dots is a music collective in where Edward and The Silverman are the leaders.
Not so far from the truth if you consider the history. There have been spells where that “leadership” was more spread through the group (Bob Pistoor and Ryan Moore also contributed a lot musically).

Quite soon in your existence you decided to move to Holland. Why was that?
I fell in love and followed my heart. Holland also looked like a promised land from the UK where Thatcher was exerting her evil influence. I’m back in London now and commute to The Netherlands every few weeks as the rest of the band is there, but it’s possible because of those much maligned budget airlines.

If I don’t count some classic industrial bands I must say that you sound very unbritish, I guess the reactions over there weren’t that cool.
I tend to disagree with that assessment. Still, I felt we were underappreciated in the UK in the beginning. Ironically this has now changed and London has become one of our best cities to play.

There are so many ways to describe your music, but who was influenced you?
The truly psychedelic souls…Pink Floyd should be mentioned, Can , David Allen, VDGG , Pierre Henry….All played a role.

Strange question perhaps, but anyway, do you listen to The Legendary Pink Dots yourself?
I have to as my wife Alena insists.

I really must ask this is as a fan. I listened to your music a lifetime (!) but in all honesty I don’t understand one word of your poetry as the music speaks for itself. Do you think it’s possible that everyone can interpret The Legendary Pink Dots in his way?
Absolutely. Music and words should be a totality – a sum of the parts. That’s why I can listen to an inspired band from Finland and love what I hear. I hardly speak a word of Finnish.

Your newest album Chemical Playschool 15 is released on Rustblade. How did you got involved with them?
They wrote to me just over a year ago. I liked their enthusiasm and passion.

I somewhere read that these Chemical Playschool-albums are improvised songs, is that true?
Partly, but Chemical Playschool 11,12 and 13 was one year in the making. Sometimes I claim unfinished pieces and apply the final brush strokes , a voice and ten the mix.

Edward, you also keep on making solo records. What’s the main difference in them and the material with The Legendary Pink Dots?
The solo music is maybe even more indulgent than Legendary Pink Dots, sometimes I like to dot all the I’s myself.

I want to finish with two questions I always ask. What’s your favorite record of all time and please state why.
Hard one, but I should say “In the Court of the Crimson King”. I heard it on the radio at a tender age and everything changed during those 9 minutes.

A special message for the Peek-A-Boo readers could be?
Never write that idea off as just a dream.

HIDDEN PLACE • We are still crazy record collectors, so we can say music is one of the reasons of our life.
EMPUSAE • Creating the music for a videogame or a horrormovie is my ultimate dream! Is there anyone who can help me to realise this dream?
THE KLINIK • We just picked things up where we left in 1991 but with the touch of today. Everything fell into place...
MARTIN KLEID • Our dream is to see our music growing and get listened by more and more people.
TERROR BIRD • Despite what anyone says, Siouxie Sioux is not an influence! I swear!
PARADE GROUND • We’re the musicians of tomorrow. Our course is a race for eternity.
VV303 • Musica delenit bestiam feram!
DREAM AFFAIR • We are an amalgamation of things from the past, present, and future.
NORTHERN SADNESS • People don’t simply buy something because the dj says it’s great and that’s a good thing
JOHAN TROCH • The mood of the day, or music I listened at lately, can inspire me.