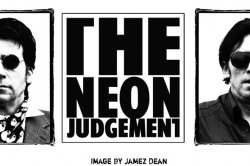 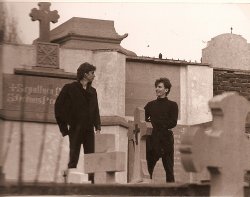 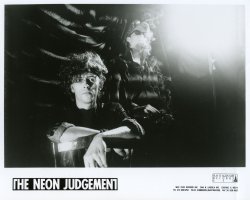 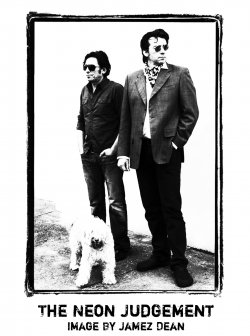 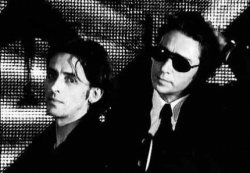 The last 20 years everything has become flat, from music to media. Even more, we were writing about it 20 years ago and now it has become reality.

The Neon Judgement were in the spotlight last year when Dark Entries Records re-released their first tapes. After having successfully toured with the DocuVision-tour, Belgian label Onderstroom Records is next to re-release this and the reason is simple: due to high demand! Time to dive back in history with founder Dirk Da Davo to see how it was in those early days!

I guess we were born with a rich imagination. Nah, seriously TB is inspired by Frank’s coughing (TBC, hence the link) and DaDavo finds its inspiration from the days we were recording our first musical efforts with a ghettoblaster.

There used to be song called “It’s Da Devo” and from that title I simply changed it to DaDavo. It sounds quite Spanish which was perfect as people have often thought I had Spanish origins because of my look. Apart from that it’s also a sort of wordplay from “The Devil”

How long were you going before “Factory Walk” was released?

Quite some years I think. We already had 2 tapes released “Suffering” and “TV Treated” which we try to sell at our gigs.

How were the reactions, after all, that type of music was rather unusual?

After all, not that bad… People were longing for something new and somewhere it seemed like we were the answer to that desire. As they say : right time, right place.

Everything’s been done by yourself, that must be something hard to deal with moneywise?

It was not so bad as you might think as after all everything’s been recorded with a 4 track taperecorder so not in studios that absorb your money.

By the time you were recording your first material, was there something inside that made you aware that you were doing something timeless or did you realize that you stood at the cradle of something that would be seen as highly influential?

Not at that moment, no. We were both big Velvet Underground fans and we we were thinking : we can do that as well.

We were quite busy with what we would like to call the “spirit” of our music, we also listened a lot to the very first releases by Pink Floyd at that time (laughs).

But that’s what I mean with “spirit” in music! Everything’s been handled in a personal way and we never cared about what was seen as hip back then and that’s how Velvet Underground got started…

About influences, everybody’s coming up with Suicide but that’s a typical band nobody loves or cares about, just musicians…

We only discovered Suicide after we recorded our 7”, “Concrete”. A friend introduced us to their music so I can’t really say Suicide were an inspiration for The Neon Judgement.

Today there’s a lot of music but I do miss a lot of originality whereas some decades ago original bands were rising everywhere. Sometimes you fear the inspiration has gone forever but I refuse to believe this…

I think it has something to do with the mentality and the technique of today which makes everything so easy these days. We didn’t make music for music’s sake but because we had something to say, and that’s what lead us to all these old bands.

The last 20 years everything has become flat, from music to media. Even more, we were writing about it 20 years ago and now it has become reality.

Come on, be honest, try to get something on the radio these days that’s underground!

The real underground hits were coming before your “Mbih” years. Every new wave fan could sing these songs from the beginning till the end and without…airplay on the radio….

Still wanna say that on wednesday afternoon you got the programme “Vrijaf” which was moderated by Gust De Coster (Belgian famous DJ, ed.) and everything that was Belgian was presented in his show.

Another hot DJ was of course Luc Jansen who did his “Domino” show on Saturday eve and there were some pirate stations around like FM Brussel.

I think today it would be much harder to get that sort of stuff played as all radios which are around decided that they don’t wanna disturb their audience.

I guess it’s better not to talk about sales but yes we could live from it. Not that we were bathing in great luxury but it was bearable though. But we made that decision to live from it, as we agreed together that we would do worldtours and things as such can’t be combined with any normal job. But I can tell you this, you won’t get rich of being a musician…

I never understood that Dirk, “TV Treated” became a huge success with the minimum of promotion…now you can’t sell such a thing with a bus full of promogirls!

Once they said the 80’s sucked, now they’re cool….

After the 80’s you had the 90’s that brought us all the Nirvana’s and the Pearl Jam’s of this world and it was indeed better not to mention those eighties.

But having said that, there were two kind of eighties : you had the alternative scene with bands like Front 242 or Sisters Of Mercy but there was also another part of the 80’s which was full of crap and people are totally ashamed that they once liked it.

Our band had to wait quite a while before the recognition started. The proof that the 80’s were okay is that today we still play these tracks. Our audience varies from 14 to 54 year old people so it cover a few generations.

After “Mbih!” you startyed working with PIAS. I know that back then PIAS weren’t the PIAS they are now, but why have you done that?

We were looking for some exposure outside Belgium. We didn’t want our music being limited to the new wave audience from Belgium alone. That was a necessary decision if we wanted to live from our music. PIAS would give us that possibility.

Perhaps but it was something we didn’t want anyway…

With a track like “Miss Brown” you proved you could do the ultimate dance track. Why not do what Jo Casters from Poesie Noire did and create thousands of New Beat projects and cash in?

We always stayed true to ourselves and that makes us proud. I mentioned earlier the spirit of music, remember? That was/is a punkspirit. Lots of people I thought had the same thoughts suddenly jumped on that New Beat train but it only had a short life. Most of those serious people soon stopped after the New Beat-thing and after that they were lost as there was no way back, but for us the road is still open…

Being aged now, I see that New Beat thing in a different way…I mean back then I hated it.

If its up to me, I would like to shut up about that New Beat thing (laughs).

“Blood and thunder” is a totally different story. I guess recognition comes with years but back then they must have warned you a thousand times about the commercial suicide…

Maybe, but for us as people or artists, “Blood & Thunder” was something like a necessity. I totally agree that seen from commercial perspective it would have been better to stick at tracks that sounded like “TV Treated” or “Fashion Party” but we aren’t made like that.

And why are you grabbing back to these tracks in 2010?

Oh, you know…we have so much stuff written that we could play a gig for 8 hours. The more I think about it, the more your idea appeals to me!

Never got feelings of frustration that “Blood & Thunder” was so misunderstood?

No, as I still think it was a record that had to be made.

Never got the feeling Luc Van Acker once had : damn it, I’m off to America!

And that playground has so many brilliant bands, quite unbelievable if you think about it?

Yeah, but Belgium is a real melting pot of different cultures. We are in the centre of Europe and it always has been kind of chaotic and that's perfect circumstances for art. When we were touring outside our country, we often got the question : What is it about Belgium?

People were curious that people from a country like ours made such weird music.

It’s like the famous Confucius once told : If you wanna know if people are ruled well or have good or bad laws, you can investigate the music they make. Something to think about, not?

The time on KK was less successful. How do you deal with that? You can say : people come and go, but still…

Okay, but it was also the decade of grunge. New wave was totally gone and coming up with such a name in such a decade is impossible. It also has a lot to do with money (investment and promotion).

Sometimes they thought : we release an album by Neon Judgement and it sells automatically but it doesn’t work that way. I run my own label DanceDelic D and I can tell you that I learnt a lot about it.

We like that as it means we built on the future of music….

I know it’s a dirty question, but do you think you can do something like you did in the early days?

It was a different time with a different spirit and other methods. You have an evolution both as person and artist. But on our Smack-CD from 2009 you could see that old spirit once again.

But let’s be honest : the music from the 80’s we created has already been made and with a band that has a past like ours it’s kind of difficult to satisfy everyone….

I give you the last words Dirk….

RADICAL G • It ain't easy but difficult is also an option, right?
FLESH & FELL • The 80's revival is more than just some nostalgia.
MERCIFUL NUNS • Bands which are generally associated with the Goth genre nowadays, I don’t really like.
MONOLITH • It's a very powerful thing to get electronic sounds through your brain.
COLD COLD GROUND • It is better to be hated than to be ignored.
MIREXXX • I have a dark and a light side like anybody else.
LOVE LIKE BLOOD • Our musical development is a pure natural thing, we never wanted to end like “cheap sounds like Sisters band”
CHAMELEONS VOX • MARK BURGESS | We had more in common with The Fall than we ever did with the likes of U2, The Bunnymen, or the Psychedelic Furs.
MANUFACTURA • Outside of animals and a few children, there are no innocents.
SAMY BIRNBACH • MINIMAL COMPACT | MORPHEUS SECRETS | I don’t want to feel restricted by any topics, I also wrote about love, politics, deceit , sex, death, madness, bible stories, nonsense, fun and cakes…

Other reviews from THE NEON JUDGEMENT
THE NEON JUDGEMENT • ...forcing an artist to play on a certain dB level, it's like limiting the artistic freedom and his voice. It's almost the return of a new kind of fascism. I know what my performance needs.